“I HAVE a dream that Slovakia will become a place where politicians and the state help and protect decent people and not arrogant oligarchs.” That is how former interior minister Daniel Lipšic describes his political vision, one which he now intends to pursue outside the Christian Democratic Movement (KDH). The MP announced his departure from the party, to which he has belonged for more than a decade, along with fellow MP and former journalist Jana Žitňanská on May 27, following weeks of speculation about his intentions. 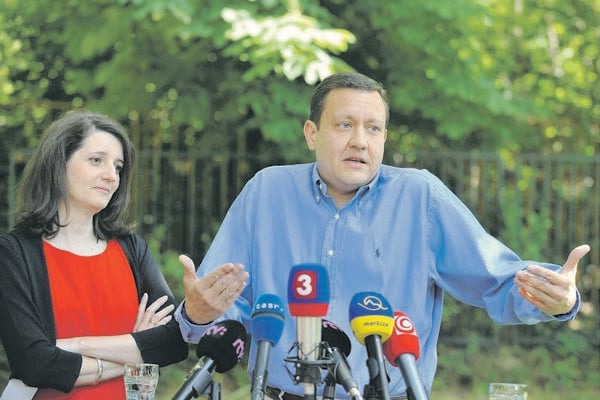 “I HAVE a dream that Slovakia will become a place where politicians and the state help and protect decent people and not arrogant oligarchs.” That is how former interior minister Daniel Lipšic describes his political vision, one which he now intends to pursue outside the Christian Democratic Movement (KDH). The MP announced his departure from the party, to which he has belonged for more than a decade, along with fellow MP and former journalist Jana Žitňanská on May 27, following weeks of speculation about his intentions.

Lipšic has been discussing what he calls his new vision for Slovakia’s right wing with other politicians for some time but has not said whether he will establish a new party. For now, he and Žitňanská will sit as independents.

While observers note that Lipšic has a strong personality and a distinctive voice in politics which could help him to attract voters’ attention, they also warn that the political space where Lipšic might want to position any new party is already crowded.

“The KDH feels disappointed and cheated because only a couple of months before the election it gave its trust and leading positions on the candidate list to both these members, [but] two months after the election they have left the movement,” KDH leader Ján Figeľ said in response to the pair’s departure.

Right-wing politicians have noted that Lipšic’s decision contributes to the ongoing fragmentation of the Slovak right. The newly elected chairman of the Slovak Democratic and Christian Union (SDKÚ), Pavol Frešo, said he was hurt by every incomprehensible split in a right-wing party.

“Every puzzling split within the centre-right scene hurts me,” said Frešo, as quoted by the TASR newswire, adding that right-wing politicians should act as ones who unite, not divide.

Lipšic and Žitňanská formally quit the KDH deputy faction on May 29, well ahead of the party’s next congress, scheduled for June 23 in Ružomberok in Žilina Region. Figeľ is currently the only candidate for the party’s chair. Figeľ pointed to the fact that Lipšic had decided to quit the party only a month before its regular congress, which he said is “a space for discussion, decisions and candidacies for all posts, including the highest one”. The two KDH renegades say they will not give up their parliamentary mandates.

Richard Sulík, leader of Freedom and Solidarity (SaS), another right-wing party, said that he was not nervous about a potential new force led by Lipšic poaching SaS voters.

“We are liberals and I assume that he will found a party that is more conservative,” Sulík explained, as quoted by TASR.

Lipšic’s departure will undoubtedly weaken the KDH since he was one of the party’s most distinctive politicians, according to political scientist Miroslav Kusý. His colleague Ján Baránek, from the Polis polling agency, agreed that Lipšic might draw votes from the KDH since he was among its most popular representatives. However, considering the approval ratings of the party, Baránek does not think that the Lipšic effect will cost the KDH more than 3 percent of the total national vote. The impact of his departure also depends on whether Lipšic manages to evoke a kind of synergy effect, he added.

Baránek proposed a possible scenario in which the KDH will have around 5-6 percent and the SDKÚ perhaps 7-8 percent, while the Ordinary People and Independent Personalities (OĽaNO) party of Igor Matovič might perform similarly. “Lipšic’s departure itself evokes the need to talk about integration of these parties,” he said.

“Having four parties of similar orientation in this conservative-right-wing spectrum is just a nonsense,” Baránek told The Slovak Spectator, adding that a debate will be unavoidable with many things depending on the eventual ability of the leaders to overcome their animosity.

Baránek noted that founding a new party will not present any practical problems.

“Nevertheless, Lipšic has missed the best time for doing so, which was the day of the announcement that they [he and Žitňanská] were leaving the KDH,” Baránek said, adding that there is a large group of right-wing voters, perhaps around 200,000, who in 2010 voted right-wing but are now waiting to see who will address them, and with what.

“Lipšic did it in the worst possible way he could,” he concluded, predicting that the SDKÚ will capitalise on Lipšic’s mistake.

Kusý is not overly optimistic about the prospects for a new right-wing party, or the political future of Lipšic and Žitňanská.

“Their fate is very uncertain since I am very sceptical as far as the possibilities for a new political party in Slovakia are concerned,” Kusý told The Slovak Spectator. “It will again be one of those small parties which cannot more significantly break through because it cannot endanger the core of the already established political parties in Slovakia.”

According to Kusý, Lipšic could address some floating voters, even those who do not normally vote, but he adds that the party would have to have a very strong programme in order to appeal to those who have so far resisted the overtures of Robert Fico and others.

According to Baránek, Lipšic cannot build his party on anything other than the vision he has now presented via the media.

Lipšic has reportedly been putting out feelers to the Slovak media and activists for several weeks. The Sme daily reported that Lipšic earlier spoke to it about a strong centre-right party. So far it is not clear who else is committed to working on Lipšic’s vision.

According to Lipšic, ten years ago the right in Slovakia had drive and was the initiator of big issues like the flat tax, the second pension pillar, and NATO and EU entry, while the left wing only reacted to these issues.

“Metaphorically speaking, as far as vision was concerned it [the left] was two levels below us,” Lipšic wrote. “Today, the situation has changed. The left sets the issues and we are only reacting, clumsily.”

In comments posted on his blog, Lipšic wrote that the biggest problem of Slovakia is that it has been divided among oligarchs since the times of what he called “[Vladimír] Mečiar’s privatisers”.

According to Lipšic, the situation has evolved to the stage where oligarchs control whole political parties and “decisions in politics are thus not made for the benefit of the majority of decent people, but for the benefit of a small minority of oligarchs at national, regional and local level”.

Lipšic discussed his vision a couple of weeks ago with former prime minister Iveta Radičová, who had then just resigned from her party, the SDKÚ. This prompted speculation that Lipšic planned to resign from his own party. However, Sme reported on May 5 that Radičová had categorically ruled out joining any new political party and said she had confirmed this to Lipšic. Lipšic responded that he had never offered a place in any new party to Radičová, but that he had indeed talked to her about what “vision” to offer frustrated and disenchanted centre-right voters.

MP Radoslav Procházka, whom Lipšic encouraged to join the KDH and on whose behalf he lobbied during the process of drawing up the party’s candidate list for the March general election, said that he has no intention of either quitting the KDH or standing for the post of party vice-chair or any other leadership position at the upcoming congress in June. Some in the KDH leadership, however, would like to see Procházka being given a deputy chairman’s post.

Meanwhile, Figeľ said that if he were Lipšic or Žitňanská he would return his mandate to the party.
“It is an old song with the deputy mandates, replayed again and again,” Kusý commented, adding that each mandate is linked to the conscience of the deputy concerned and that the party has no legitimate claim on them. “Those are obligations that a party is making through a type of gentleman’s agreement, but that is all.”

Kusý expects that Lipšic will want to make himself as visible as possible in parliament and notes that “parliament is the perfect floor for him to do so”.