Slovak democracy gets an average grade

NEITHER extraordinary praise nor harsh criticism was in the report card assessing the quality of Slovak democracy during the first quarter of 2012 based on a barometer prepared by the Institute for Public Affairs (IVO), a non-governmental organisation. IVO released the results of its regular survey analysing the status of democracy in Slovakia on May 16 and stated that the country was only average and that the country’s overall grade had dropped slightly from the previous quarter. 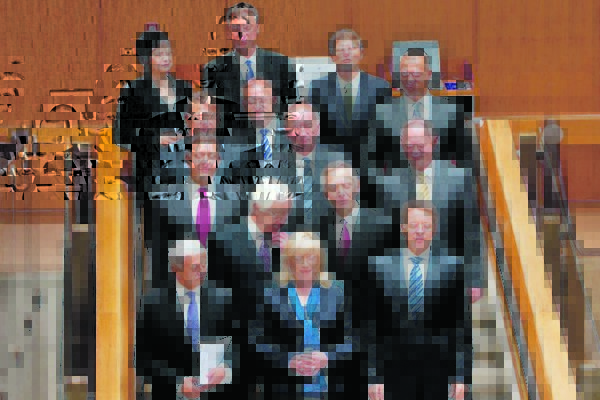 NEITHER extraordinary praise nor harsh criticism was in the report card assessing the quality of Slovak democracy during the first quarter of 2012 based on a barometer prepared by the Institute for Public Affairs (IVO), a non-governmental organisation. IVO released the results of its regular survey analysing the status of democracy in Slovakia on May 16 and stated that the country was only average and that the country’s overall grade had dropped slightly from the previous quarter.

Slovakia’s overall grade in the IVO Barometer of democracy was 2.8 on a scale where 1 is excellent and 5 is failed, the grading system typically used in Slovak schools. IVO stated that the best grade can be achieved only when Slovakia has optimal democracy based on the standards and comparative criteria used by the European Union and the Council of Europe in measuring the stability of political institutions, political democracy and human rights. IVO said the drop of 0.2 points in the first quarter compared to the previous quarter was caused by negative trends in the areas of legislation and human and minority rights.

The IVO Barometer evaluates four areas of democracy: democratic institutions and a lawful state (giving Slovakia a grade of 2.5 in the first quarter); legislation (a grade of 2.5); respect for and protection of human and minority rights (a grade of 3.0); and media freedom and the quality of public-service media (a grade of 3.0).

The first quarter barometer monitored a period in which the government changed in Slovakia after the March 10 parliamentary election. This is reflected in the analyses written by experts from IVO about each of the four areas, noting that the results were influenced by both the cabinet led by Iveta Radičová, comprising four centre-right parties (July 2010-March 2012), and the new cabinet led by Robert Fico with a one-party government after Smer won an absolute majority of seats in the March election.

IVO president Grigorij Mesežnikov, the author of the analysis of legislation in Slovakia, wrote that responsibility in this area rests with the previous government led by Radičová.

“The end of the term was really marked by a somewhat weaker concept in the area of preparation and passing legislative proposals,” Mesežnikov wrote, adding that some steps taken by the government in the legislative arena were just reactions to problems facing the cabinet and the quality of legislative proposals suffered for that reason.

The IVO Barometer reported that the lower grade in the area of human and minority rights was a result of the new cabinet.

“The way the government has approached this area, not only regarding its presented intentions but also some specific steps that were taken such as ending the post of deputy prime minister for human rights and minorities, is something that violates the verbally declared status quo that the government said they wanted to stick with,” Mesežnikov stated in presenting the barometer results, while adding that this is why the IVO experts found it appropriate to lower Slovakia’s grade in this area.

“It’s really strange that the government received the parliament’s trust only on Tuesday [parliament approved the government’s programme on May 15] and Mr Mesežnikov is already announcing that democracy in Slovakia has worsened – that is perhaps because we won the elections,” stated Fico, as quoted by the SITA newswire. The prime minister was also critical of the IVO Barometer analyses during his first term from 2006 to 2010, adding that it is not a crime that Smer won the parliamentary elections in March.

“We will not apologise to anybody, especially not to Mr Mesežnikov, for having won the elections,” Fico stated, as quoted by SITA.

Mesežnikov said that Fico’s reaction means that he apparently has not read the analyses in the IVO Barometer.

“If he knew the content of our analytical results, he would probably have a different reaction to what has been said and he would perhaps not accuse our analysts of not being objective towards his government,” Mesežnikov stated.

Beginning in 2012 the IVO Barometer started evaluating the status of civil society and the so-called third sector in Slovakia, with the first quarterly evaluation presented only in a narrative text without a numerical score. The next quarterly report will include a numerical grade.

“It is a natural part of the functioning of democracy,” said IVO analyst Martin Bútora, as quoted by SITA, during presentation of the results. Bútora authored the chapter on civil society.

Civil society made some advances during Radičová’s past term when some initiatives and projects culminated, according to Bútora, while adding that the change in government has provoked concern among some organisations in the third sector.

“First, the cabinet did not invite representatives from the non-governmental sector to the meeting of social partners and there were questions over how the plans and projects of civil society would be anchored in the programme statement of the government as well as over the cancellation of the deputy prime minister [post] for human rights and national minorities,” Bútora stated, as quoted by SITA. But SITA wrote that Bútora appreciated that Prime Minister Fico and several state secretaries (i.e. deputy ministers) from various ministries attended a meeting with NGOs on May 14.