CORPORATE responsibility to society and an individual company’s philanthropy are matters that often resonate with the general public. Companies that are trying to improve the environment in which their employees work and live and make society better can serve as a positive example for other employers. According to the organisers of a conference titled Social Responsibility of Media held in Bratislava on May 22, media coverage of corporate social responsibility (CSR) efforts is important in Slovakia but it is not done as well as it should be by local outlets. 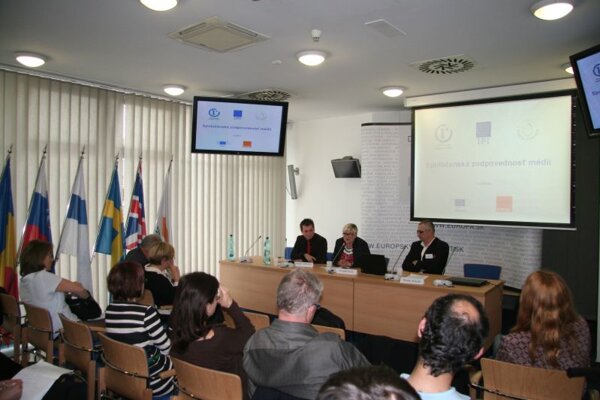 CORPORATE responsibility to society and an individual company’s philanthropy are matters that often resonate with the general public. Companies that are trying to improve the environment in which their employees work and live and make society better can serve as a positive example for other employers. According to the organisers of a conference titled Social Responsibility of Media held in Bratislava on May 22, media coverage of corporate social responsibility (CSR) efforts is important in Slovakia but it is not done as well as it should be by local outlets.

“There are many positive things happening in the field of CSR but they have a small social response,” Pavol Múdry, the chair of the International Press Institute (IPI) in Slovakia, told The Slovak Spectator, adding that the media is perhaps the only institution that can improve the situation by better presenting these activities to the public.

The aim of the conference, organised by IPI, the Institute for Public Affairs (IVO) and the Slovak Donors’ Forum, was to discuss why the media is not more active in reporting on companies’ CSR activities and to discuss why coverage tends to be very vague and does not specify what was accomplished.

“The main idea was the fact that if anything negative happens within a company, media cite the full name of the company, while for positive activities such as sponsoring, social support or activities [aimed] at improving health care, for example, the company which assists in doing this is not clearly specified,” Múdry told The Slovak Spectator.

Lucia Faltinová from the Slovak Donors’ Forum added that another aspect of the conference was focused on the social responsibility of media enterprises, since they also operate as businesses.
She said the forum released a document in 2007 that had standards defining covert forms of advertising that was based on input from publishers and was agreed by MF Media, Ringier, Sanoma and Trend, several large Slovak media firms.

But Faltinová told The Slovak Spectator that since then the overall cooperation between businesses and the media has not significantly improved and that the conference represented the “start of a renewed effort” to more effectively address the issue of media coverage of CSR activities in partnership with all stakeholders.

Another issue discussed at the conference was various aspects of current law in Slovakia and whether it restricts the local media from writing about companies’ CSR and philanthropic activities.
Múdry and Faltinová told The Slovak Spectator that the conference discussed several concrete ideas that can be further developed.

“Another concrete step might be preparing an analysis of specific paragraphs of the law on broadcast and retransmission and submitting such an analysis for public discussion,” Múdry stated.

An identified problem was that Slovak media outlets find it difficult to distinguish between covert advertising, PR articles and positive news that is fairly reported, with representatives of the media saying they are often afraid of citing the full name of a company in a positive way, worried that they could be punished for covert advertising.

“The media, in my opinion, cannot support this position,” Múdry told The Slovak Spectator.

He added that the full name of a company is not as important as the media informing completely about the firm’s CSR activity as this can serve as a good example for other companies.

“Media, mostly broadcasters, are afraid of supervisory bodies and media councils as well as fines [for covert advertising], so they regulate themselves more than required,” Múdry stated.

He compared the current situation in Slovakia with that in the United Kingdom. He mentioned as an example Ruth Sullivan, a writer for the Financial Times, who was named Corporate Governance Journalist of the Year in the 2011 Corporate Governance and Responsible Investment Journalism Awards. The awards are given by PIRC, a firm in the UK which provides research and advisory services to institutional investors on corporate governance and corporate social responsibility as well as the British law firm of Robbins Geller Rudman & Dowd.

Faltinová added that there is much misunderstanding and false expectations by both the media and businesses. She stressed that the Slovak media needs to be far more professional and not to confuse sponsorship, advertising and coverage of philanthropic activities, adding that some media outlets also have “misconceptions in terms of revenue”.

“Effective and sustainable cooperation with businesses starts with developing a relationship that gives the media access to in-depth information,” Faltinová told The Slovak Spectator, adding that too often the media develop such a relationship only after offers of advertising space are established.

She said that in Slovakia the media often display “a sign of entrepreneurial immaturity that is based on a short-term rather than a long-term strategy” while businesses should also “be more humble and realise that their money does not buy everything, and certainly not loyalty”.

“When forcing the media to be loyal – i.e. ‘to sing to one’s tune’ particularly in its editorial policy, they [businesses] start destroying one of the major advantages of democracy: freedom of speech,” Faltinová told The Slovak Spectator, adding that this can have far-reaching consequences because “it can destroy not just the media and severely limit the communication ability of businesses but the entire concept of an open, pluralistic society”.

“So the ball is in both [parties’] hands,” Faltinová stated. “But unlike a typical sports match, this is a game that both players have to win. If only one wins, it is a losing game.”