Ageing in the spotlight

WHILE in the past silver hair and wrinkles represented wisdom and experience, nowadays youth and beauty seem to be more greatly treasured by society. This trend has come despite the growing number of seniors and rising life expectancy. To change such attitudes, the European Union has declared 2012 to be the European Year for Active Ageing and Solidarity between Generations. Its aim is to attract attention and inform those who make public policies such as public servants, state and local government bodies, and society as a whole about the ongoing demographic changes in Europe and also motivate seniors themselves to increase their participation in their communities and society at large. 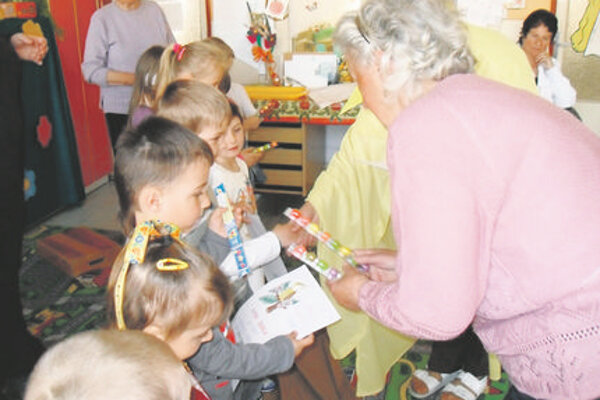 WHILE in the past silver hair and wrinkles represented wisdom and experience, nowadays youth and beauty seem to be more greatly treasured by society. This trend has come despite the growing number of seniors and rising life expectancy. To change such attitudes, the European Union has declared 2012 to be the European Year for Active Ageing and Solidarity between Generations. Its aim is to attract attention and inform those who make public policies such as public servants, state and local government bodies, and society as a whole about the ongoing demographic changes in Europe and also motivate seniors themselves to increase their participation in their communities and society at large.

“I believe that by the ongoing European year we will create preconditions and initiatives supporting active, dignified and healthy ageing,” Ľubica Zajacová, Slovakia’s national coordinator for the initiative, which comes under the auspices of the Government Office, told The Slovak Spectator.

She said she believes that the initiative should not replace systematic and expert work to create a general environment friendly to all generations and supported by all generations.

“It creates preconditions for expert and lay discussions about possibilities for active ageing with the support of all generations, about barriers which prevent this process, and challenges which scientific-technical innovations bring into the daily life of seniors,” said Zajacová.

The EU’s population, like that of most other developed regions, is living longer and in better health. Since 1960, life expectancy has climbed by eight years and demographic projections foresee a further five-year increase over the next 40 years, a special Eurobarometer survey on active ageing released earlier this year reported. This means that, together with the low birth rates of recent decades, the average age of Europe’s population is increasing rapidly. The European statistical office projects that by 2060 there will be only two people of working age (15-64) in the EU for every person over age 65, compared to a ratio of four to one today.

Demographic data from the Slovak Statistics Office show that the Slovak population is ageing too. Over the 10 years to 2010 the share of the 65+ age group increased by about one percentage point to 12.4 percent. On the other hand the share of children decreased by over 3 percentage points to 15.3 percent. A closer look at the age structure of the 65+ population shows that the total number of such people has increased 3.5 times over the last 50 years and that this trend will accelerate.

One of the reasons for the higher average age of the population is growing life expectancy, which in 2010 was 71.6 years for men and 78.8 years for women. This was an increase compared to the past, but Slovak life expectancy still lags that in western European countries. And this is not the only indicator in which Slovakia is behind more developed countries: Slovaks also seem to regard seniors in a more negative way.

Vilma Vitteková from SOCIA, a foundation supporting social change devoted to the theme of ageing, pointed out that, according to Eurobarometer statistics, a person is perceived as a senior or “old” in Slovakia from the age of 58 while across the EU the equivalent figure is 64. As many as 25 percent of respondents regard a man as old when he reaches the 41-50 age bracket.

Vitteková also cited the findings of sociologists Zora Bútorová and Jarmila Filadelfiová from the Institute for Public Affairs (IVO).

“In the past old people were highly esteemed in society for their wisdom and experience,” Vitteková told The Slovak Spectator, adding that in families respect for grandparents was granted naturally, as was care for them. “We believe that it is high time to change [modern] society’s attitude towards old age and ageing and to start appreciating the advantages and opportunities which this natural part of life brings.”

The EU defines active ageing as growing old in good health and as a full member of society, feeling more fulfilled in jobs, more independent in daily lives and more involved as citizens. The European Year of Ageing seeks to promote active ageing in three areas: employment, participation in society, and independent living.

The national working programme of the European Year of Ageing contains numerous and varied activities and initiatives that the Slovak government has created and is carrying out with partners including European institutions. Among them, Zajacová listed a plan to update the National Programme of Protection of Old People dating from 1999. In the social sphere a national project is being prepared to secure the continuity and effectiveness of social services and simultaneously to help enable people who cannot care for themselves, including old people, to stay in their natural family environment and enable them to lead an independent life for as long as possible.

Other initiatives focus on employment of seniors. Zajacová stressed that surveys conducted at the European level have disproved the argument that the presence of older employees prevent school graduates from getting jobs. This is because their goals and opportunities in fact differ widely.

“Moreover, mixed working teams which include young as well as older workers, men and women, but also other, deprived groups... have a bigger competitive potential and can, especially under the influence of globalisation and integration processes, flexibly react to the change in needs, tastes and lifestyles of clients,” said Zajacová.

In Slovakia, the European Year for Active Ageing and Solidarity between Generations was opened by a touring exhibition, Old Age Touches Us, prepared by the government and SOCIA. Some expert conferences focusing on general aspects of ageing as well as employment of seniors were also held.

Now a project, Generations at Schools, within which discussions between students and seniors are held at schools, is continuing with the aim of finding out how a dialogue between generations can contribute to better education.

Describing future events, Zajacová mentioned a discussion forum “Active Ageing and Intergenerational Solidarity: What are the Different Experiences across EU Countries?”, to be held on June 18, and another event, Meeting of Three Generations, to be held the following day.

“These activities open a space for exchange of good experiences in support and protection of seniors and strengthening solidarity between generations,” said Zajacová, summing up the main goals of the events and initiatives organised within the European Year of Ageing. “Another significant aspect is activating seniors themselves, who can on their own, of course in line with their abilities and health condition, join in with the life of the community and society.”