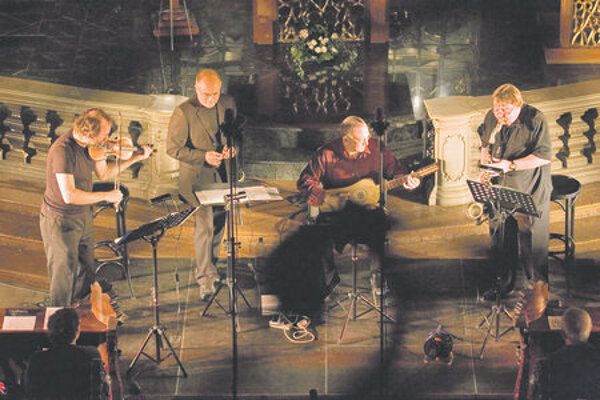 Bratislava
CONCERT:THE YALE Whiffenpoofs are the oldest and best-known collegiate a cappella group in the USA: their origins as a senior quartet date back to 1909. Every year, 14 senior Yale men are selected as “Whiffs”. Today, the group has become one of Yale’s most celebrated traditions and on June 7, at 18:00, they will give a concert in the Dvorana concert hall in the VŠMU building, Zochova 1 in Bratislava. The event, which is co-organised by the US Embassy, is free

Bratislava
CLASSICAL MUSIC: Dni starej hudby 2012 / Days of Early Music – This year, the festival of classical music carries the theme Monteverdi and His Era. Over ten days, it offers a workshop and concerts (in several venues) of various ensembles interpreting music by Claudio Monteverdi (1567-1643) – Lamento d’Arianna and his sacral works in particular – as well as Tarquinio Meruia, Dario Castello, Giovanne Salvatore and other musicians of this period.
Starts: June 1-11; various sites. Admission: €8-€10. Tel: 02/5443-0998; www.earlymusic.sk.

Bratislava
PUPPET THEATRE: Ninja – Famous Japanese artist Nori Sawa will present his original show, inspired by the traditional technique Bunraku and Judo, a martial art. The puppets are the made by Sawa himself from rare, ancient fabrics used to make kimonos. The show, intended for children over 5, is performed without words and accompanied by live music and projections.
Starts: June 9, 19:00; Bratislavské bábkové divadlo, Dunajská 36. Admission: €3. Tel: 02/5292-3668; www.babkove-divadlo.sk.

Bratislava
EXHIBITION: Monumental Motion / A Cycling Life in the Danish Capital – An exhibition of photos from Copenhagen that depicts how Danes use their bicycles, and also includes the best pictures from the On Bicycle in Bratislava contest.
Open: Tue-Sun 10:00-17:00 until June 17; Justi’s Hall, Primatial Palace, Primatial Square 1. Admission: free. More info: www.staremesto.sk.

Slavnica
VETERAN AIR SHOW: Airshow Slavnica 2012 – This event, dedicated to the 90th birthday of Otto Smik, a Czechoslovak World War II fighter pilot who died aged 22 in an air raid over the Netherlands, will host veteran planes, some of which fought in the war and all of which are privately owned.
Starts: June 9, 10:00; airport of Aeroklub Dubnica nad Váhom, Slavnica. Admission: free for children €4-€10(including shutter bus) for adults. Tel: 042/4493-185; www.aviatikteam.sk.

Banská Bystrica
ART THERAPY/THEATRE: Arteterapia - freeDOM 2012 – This festival of art therapy is an international theatre festival organised for the 5th time by the Záhrada centre of independent culture and the Divadlo z pasáže / Theatre from the Passage, which is a community theatre working with mentally handicapped people. The festival includes a host of events in various locations.
Starts: June 6-9; various sites. Admission: €2-€4, or €20 for the whole festival. More info (in English): www.festival-arteterapia.sk.

Liptovský Mikuláš
EXHIBITION: Stotožnenie s prírodou / Identification with Nature – An exhibition by Michal Kern, who embeds his work, influenced by conceptual art and action art, in nature. Instead of depicting nature on the canvas, Kern works directly in the countryside, which has surrounded him since his childhood.
Open: Tue-Sun 10:00-17:00 until Sep 29; Liptov Gallery of P.M. Bohúň, Tranovského 3. Admission: €0.50-€1. Tel: 044/5522-758; www.galerialm.sk.

Košice
CONCERT:A CONCERT by the Dowland Project will open the Košice part of the Konvergencie music festival on June 5, at 20:00, in the Premonstratensian Church of the Holy Trinity (former Jesuit Church), Main Street (following a performance in St Martin’s Cathedral in Bratislava on June 4.) The Dowland Project, founded by John Potter, tries to re-invent Renaissance and older classical music and give it a new form, sometimes merging it with jazz. Slovakia will see its first forays into Schubert’s “Lieder”, i.e. songs. Tickets cost €10-€19 and can be bought through www.eventim.sk.

Košice
BOTANICAL GARDEN: Motýle exotických trópov / Exotic Butterflies of Tropics – For the fourth time, the city’s Botanical Garden offers more than 100 species of butterflies from around whole world: weekly, 500 to 600 cocoons are imported from the UK and placed in an environment that approximates their natural habitat for the butterflies to emerge.
Open: daily 9:00-17:00 until June 30; exposition greenhouse, Mánesova 23. Admission: €1-€2. Tel: 055/2341-667; www.upjs.sk/pracoviska/botanicka-zahrada.