VILLAGE authorities were stunned recently after receiving notices from the Slovak Performing and Mechanical Rights Society (SOZA), a non-profit association of authors and publishers of musical works, demanding payments for children’s performances of traditional Slovak folk songs at public events. Now some of the mayors of the affected villages are up in arms over the demands. They want a more sensitive and reasonable approach from SOZA and the government is now talking about changes to the copyright law. 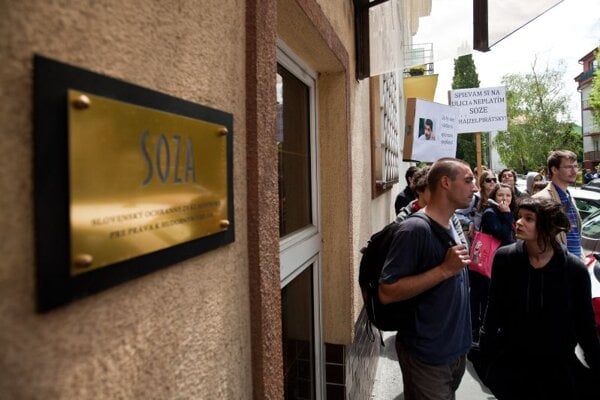 VILLAGE authorities were stunned recently after receiving notices from the Slovak Performing and Mechanical Rights Society (SOZA), a non-profit association of authors and publishers of musical works, demanding payments for children’s performances of traditional Slovak folk songs at public events. Now some of the mayors of the affected villages are up in arms over the demands. They want a more sensitive and reasonable approach from SOZA and the government is now talking about changes to the copyright law.

SOZA argued that the villages of Heľpa, Závadka nad Hronom and Pohorelá, all in the Brezno district in central Slovakia, are obliged not only to pay fees for music performed at various events but to notify SOZA in advance of any events involving music.

The village of Pohorelá received an invoice for €62.40 for the use of traditional folk music at an event to mark Mother's Day and another on St Nicholas’ Day, both organised for children. Heľpa was invoiced €80 after children performed for their mothers on Mother's Day.

“We were singing ‘To ta Heľpa’ [That Heľpa],” said Mária Kemková from the Heľpa municipal office, as quoted by the Sme daily. “I do not understand what we have to pay for. Who has copyright on folk songs?”

While Heľpa did pay the invoice, Pohorelá is ready to go to court over the charges from SOZA, a non-profit association.

It seems that the invoices have prompted not only outrage on the part of the municipalities in question but also a wider debate about the possibility of passing a new copyright law. The Ministry of Culture said it is sympathetic to the plight of Pohorelá and other affected villages, with ministry spokesman Jozef Bednár suggesting that new legislation should respond to the actual need for copyright protection as well new approaches to content protection in the digital age. The ministry may even pursue a quick change in the law to prevent the recent situation from re-occurring, the SITA newswire reported.

About 20 to 40 people protested in Bratislava on June 5 against SOZA’s actions. Meanwhile, the Association of Towns and Villages of Slovakia (ZMOS), which represents Slovak mayors, has also taken the side of the municipalities in their clash with SOZA.

After two days of media pressure, SOZA explained why it had sent an invoice to Heľpa.

“The village has still not submitted the list of songs used which, according to the collective licence agreement, had to be sent within seven days after the day of the event,” said Katarína Tomandlová, SOZA’s marketing director, as quoted by Sme. SOZA has the legal right to collect royalties for authors the daily wrote. SOZA appeared to imply that any music, by any author (or none) performed at any public event, must be reported to it.

Representatives of the village wrote only “Heľpa’s folk songs” on its report to SOZA; Tomandlová did not say whether the association had asked for additional and more detailed specification about what was to be performed.

“I responded in an email,” Tomandlová told Sme. “I will not comment on it any more.”
Mária Kemková from the town administration in Heľpa told Sme that if SOZA asked them for fuller list they would be willing to send it.

Pohorelá now faces a threat from SOZA that it might seek financial redress via the courts, even though children at its events performed only traditional folklore songs. The municipality said that as the organiser of events for children it was not obliged to report these because they did not involve the performance of any works protected by copyright, according to an official statement published on the village's webpage.

“We are prepared to be judged,” said village official Ján Pompura, as quoted by Sme. “We will not withdraw in any case.”

SOZA, in its own official statement, defended itself, explaining that the association is only following existing copyright law, which authorises SOZA to sign general consent licence contracts with organisers of public musical events.

These contracts give organisers general permission to use musical works, but they are obliged to notify SOZA at least ten days before the event in question and to specify the names and authors of the songs that will be used. If they do not make such a filing, an event is automatically considered to be unlawfully using songs under copyright protection.

SOZA’s inspector visited Pohorelá on April 4 and learned that two events had been held without licence contracts. According to SOZA’s official statement the inspector informed the mayor of the village of his duties and wrote up an inspection notice which the mayor signed indicating his understanding that the inspection had been carried out and that he had no objections.

However, the mayor, Jozef Kalman, tells a different story. In the Pohorelá press release, Kalman claims he was led to believe that the SOZA inspectors understood that Mother’s Day and St Nicholas’ Day were folklore events and therefore the village would not have to pay any fees. The fact that children were singing folk songs is noted in the inspection notice: under ‘musical genre’ it states ‘concert folklore’.

“I understood [that it was proof] to indicate for their employer that they were here, so I signed it,” stated mayor Kalman.

He added that a note “control without problem” had been written by the inspector during the discussion so that he [Kalman] had no reason to believe that the village would have to pay a fee. Later, when the village authorities received an invoice together with the inspection notice, they realised that the document could not be signed without admitting copyright violations.

The Pohorelá press release concludes: “It is bewildering that a qualified SOZA inspector demanded acceptance of this document even though it is plainly stated that the concerts were folkloric and therefore contained folk songs.”

Pohorelá sent a letter to SOZA reiterating that the invoice was not appropriate but SOZA continued to press for payment.

Pohorelá also stated that the village cannot use public funds for paying for singing folk songs because it would be at odds with the copyright law and the legislation on the operation of municipalities.

“That is why we are prepared to defend the singing of folk songs by our children even in a court,” the Pohorelá authorities stated.

SOZA is willing to discuss

ZMOS considers the payments in question to be a threat to local culture, according to its director, Jozef Dvonč, as quoted by SITA. He noted that it was cities and villages which helped local traditional culture to survive even in the hardest economic times.

“City and village mayors are anxious about these methods and demand investigation of the lawfulness of this procedure, and where the money collected goes,” said Dvonč.

According to SOZA director Vladimír Repčík, SOZA and ZMOS want to meet to find a common solution.

“I believe that when we reach an agreement we will have the strength to change the copyright legislation in this spirit,” Repčík said, adding that he considers the current law to be bad.

Bednár of the Culture Ministry has said that the ministry expects SOZA to proceed sensibly and reasonably while applying the copyright legislation.

“Even I advocate applying reason and a sense of proportion,” Repčík responded. “I believe that we explain why we behave as we do precisely: both sensibly and in proportion,” as quoted by Sme