Rainbow Pride to be held in Bratislava

THE RAINBOW Pride rally to support the rights of lesbian, gay, bisexual and transgender (LGBT) citizens, which was due to be held in Bratislava on June 9, has received the endorsement of 18 foreign ambassadors to Slovakia. 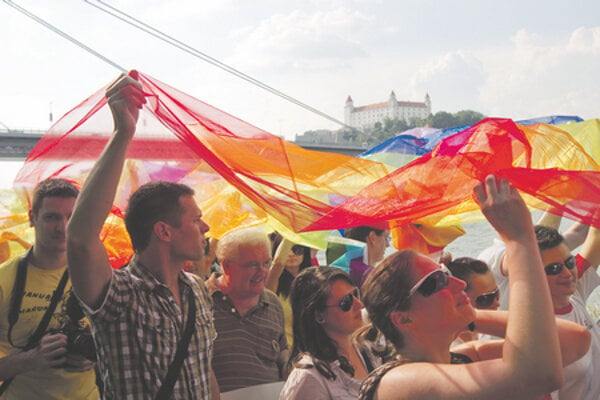 THE RAINBOW Pride rally to support the rights of lesbian, gay, bisexual and transgender (LGBT) citizens, which was due to be held in Bratislava on June 9, has received the endorsement of 18 foreign ambassadors to Slovakia.

The ambassadors, along with the representative of the European Commission to Slovakia, Dušan Chrenek, released a statement supporting the LGBT community and its initiatives, including the Rainbow Pride event, the TASR newswire reported.

“We support those attending the rally who will peacefully gather to stand up for their human rights and boost the country’s awareness of the LGBT community,” stated Martina Joriková from the US Embassy in Bratislava, as quoted by TASR.

“Members of the LGBT community also have the right to freedoms as stated in the UN Universal Declaration of Human Rights,” Joriková added.

The event was also endorsed by Amnesty International Slovensko, Bratislava mayor Milan Ftáčnik and two members of the European Parliament, Ulrike Lunacek from Austria and Monika Flašíková-Beňová from Slovakia.

“We also expect colleagues from the Czech Republic, Poland, Hungary and Austria [to attend],” Romana Schlesinger, one of the organisers of Rainbow Pride, told the SITA newswire, adding that invitations had been sent to all Slovak MPs to attend the event.

The organisers prepared three symbolic weddings as part of the day’s events: one between two men, another between two women, and one between a man and woman. The couples were to publicly celebrate their vows and use this as a means to highlight the lack of legal protection for LGBT people. The two women who were to be symbolically married were also expected to introduce their two children to demonstrate that lesbian couples can raise children.

“It is the first couple we convinced to do so,” Schlesinger told The Slovak Spectator at the end of May. “It is important that they will show their faces and demonstrate to society that this thing is simply real and there are families like this, and plenty of them.”
About 2,000 people were expected to attend the rally, SITA wrote.

Rainbow Pride and the endorsement given by the ambassadors were criticised by several religious organisations as well as by the youth group of a conservative political party in Slovakia.

Roman Catholic activists from Bratislava sent an open letter to mayor Ftáčnik in which they called on him to withdraw his support for the event, SITA wrote.

The Young Conservative Democrats of Slovakia, the youth wing of the Conservative Democrats of Slovakia (KDS), a Slovak political party established by four MPs who left the Christian Democratic Movement (KDH) in 2008, called on the diplomats who publicly supported the rally not to interfere in Slovakia’s domestic issues, saying their action was beyond their diplomatic mission.

The KDS youth group objected that the statement released by the ambassadors contributed “to support of those demands of the organisers of the rally which are clearly at odds with current legislation in Slovakia”.

The Bishops’ Conference of Slovakia planned to have about 50 young married couples and their children attend the rally and create a “live chain to show the importance of family in society”, saying that its action was initiated because “nothing is as unique and no other friendship relations can be compared with a family based on marriage”, SITA reported.