LIMITS on the number of students who can study at grammar schools and gymnasiums and greater motivation for those willing to go to vocational schools were among the first plans announced by Education Minister Dušan Čaplovič in April, saying that his main aim was to supply more graduates of technical education to the labour market. He also proposed to initiate changes in the way schools in Slovakia are financed, based on their quality rather than only the number of students they enrol. 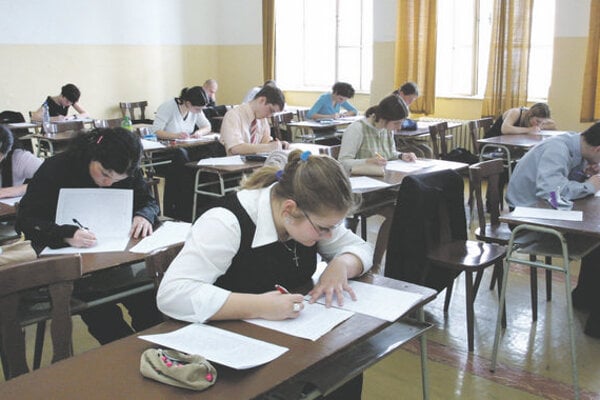 LIMITS on the number of students who can study at grammar schools and gymnasiums and greater motivation for those willing to go to vocational schools were among the first plans announced by Education Minister Dušan Čaplovič in April, saying that his main aim was to supply more graduates of technical education to the labour market. He also proposed to initiate changes in the way schools in Slovakia are financed, based on their quality rather than only the number of students they enrol.

Čaplovič praised the teaching of mathematics at vocational schools and stressed that this better prepares those who are ready to leave school than do more general courses at grammar schools and gymnasiums. He also criticised the overall quality of four-year gymnasiums, saying they accept students with worse grades. He added that private and religious schools compare poorly with state-run schools. But recently released results based on the external part of school-leaving exams taken by tens of thousands of students earlier this year threaten to undermine some of the minister’s criticisms.

“The results of the external part of the school-leaving exam hold a mirror up to the level of education at secondary schools,” Michal Kaliňák, spokesman for the Education Ministry, told The Slovak Spectator, adding that at the moment they are “the most objective information” for measurement based on the International Standard Classification of Education (ISCED level 3) that was developed by UNESCO for gauging preparation for starting upper secondary education.

The external part of the school-leaving exam consists of general tests prepared by the National Institute for Certified Educational Measurements (NÚCEM). NÚCEM is a state budget organisation founded on September 1, 2008, by the Education Ministry as one of the changes in the education system stemming from an amendment to the Schools Act in June 2008. Because the external part of the exam is the same for all schools, comparisons can be made between students and schools across the country, measuring competencies and knowledge and helping to improve the quality of the education system, according to the final report on the exams prepared by NÚCEM.

This year 59,465 students at 754 secondary schools were tested in their knowledge of their primary language (Slovak, Hungarian or Ukrainian) as well as in a foreign language and, voluntarily, in mathematics.

The results, as shown in the story below, indicate that grammar schools and gymnasiums had better results than technical and vocational schools and conservatories in all the subject areas tested. Additionally, there were nearly no differences between the results of students enrolled in state-run schools or attending private or religious schools, or between students who were attending eight-year grammar schools or four-year gymnasiums, according to NÚCEM.

Ctibor Košťál from the Slovak Governance Institute (SGI), an NGO active in the education field, told The Slovak Spectator that the results of the exam have refuted several statements made by Čaplovič on which he had based his forthcoming amendments to existing education laws.

Košťál stated that the results “have not proved the exceptionality of the eight-year grammar schools, as their students had similar results to those studying at four-year gymnasiums”, while adding that students attending grammar schools had better results than those studying at other types of schools, which casts doubts on Čaplovič’s proposal to bump up the number of students studying at technical vocational schools “without guaranteeing the quality of these schools”.

According to Košťál, the results also did not confirm any significant difference between state-run, private and religious schools and commented that this showed the “baseless favouritism for state-run schools” that he said the Education Ministry is advancing.

The changes prepared by the Education Ministry have a hidden purpose, according to Košťál, and are aimed at two groups: towards municipal schools at the expense of other kinds of schools; and towards companies’ needs at the overall expense of society. He stated that “the narrow specification for the current needs of companies and not a focus on the long-term competitiveness of graduates creates conditions for another expense to society in the future”, specifying that he foresees that society will need to deal with requalification issues in the future as well as joblessness among school leavers.

“The minister should withdraw all proposals which do not correspond with reality and which are based on unconfirmed ideas about the situation in our education sector,” Košťál told The Slovak Spectator.

Saskia Repčíková, head of the Association of Private Schools, told The Slovak Spectator that the results of the tests confirmed that more than 80 percent of private schools had better results in Slovak and mathematics than the overall average in Slovakia.
She added that there was no large difference between the various kinds of schools as there was in 2009, when the test results showed significantly different outcomes in mathematics testing between private and religious schools.

Repčíková also noted that while 8,753 students took the maths test, only 274 of these students were from private schools.

“Such a small sample is very sensitive to any deviation during the evaluation – sometimes there could be one student who does not pass the test and the results of the whole sample change significantly,” she told The Slovak Spectator.

The chair of the Association of Headmasters of State-Run Grammar Schools and Gymnasiums (ARŠG), Pavel Sadloň, told The Slovak Spectator that the outcome of the external tests confirmed that grammar schools and gymnasiums had achieved better results than vocational and technical schools, despite the fact that students from the former had to take more difficult examinations in their chosen foreign language.

However, he said it was not clear how the results would be used.

“I hope that [the results’] relevance will be applicable for at least some universities,” he said, adding that the results of the tests might now be used by some secondary schools to compare their quality with other educational facilities.

An emphasis on maths

The Education Ministry first stated that it wanted to re-introduce mathematics as a compulsory part of the school-leaving exam for all students at the secondary level.

But after meeting with various educational experts he announced a change in plans and said that students at grammar schools and gymnasiums would be allowed to choose to be tested in other scientific subjects such as biology, chemistry or physics, the TASR newswire reported.

Kaliňák told The Slovak Spectator that the ministry plans in the future to increase the number of courses in mathematics as well as other scientific fields at gymnasiums and grammar schools as part of the curricula framework of the state’s education programme.

He stressed that mandating these courses must be accompanied with better education for teachers of these subjects and changes to existing educational standards.

“The indistinct differences between the results of four-year gymnasiums and eight-year grammar schools support us [the ministry] in our effort to minimise the selection of pupils at an early age,” Kaliňák stated, adding that the significant departure of students to eight-year grammar schools has resulted in the low quality of secondary schools and has had a negative impact on technical education.

“If we want to increase the quality of our graduates in the labour market in the scientific and technical sectors it is absolutely natural and legitimate that the conditions for students leaving from secondary schools are changed,” Kaliňák stated.

Košťál told The Slovak Spectator that he is not a supporter of too many directives from the state in the area of mandatory subjects except for English language classes, which he considers to be a good step.

He also added that making a scientific subject mandatory will not necessarily increase students’ interest in it.

“It [interest in scientific subjects] will increase if the schools offer interesting content and interesting methods of teaching these subjects,” Košťál said.

When asked about the near-term approaches that the ministry should focus on while preparing changes at the secondary-school level, Košťál told The Slovak Spectator that it should be on “quality and how to reach it”.

He stated that the ministry should stop believing that “one-off, centrally-passed measures will bring significant changes, like the snapping of a magical whip”.

“It is necessary to work on the transformation of vocational schools to become schools that offer more quality content for possible applicants,” Košťál said, adding that the ministry should also prepare a new vision at the secondary-school level that will be “based on the quality of specific schools, not their type”.

“This is what should, in the end, be the result of the changes – quality schools competing to attract pupils and parents with their results, not based on directives from the ministry,” Košťál stated.

Repčíková also believes the ministry should focus on the quality of specific schools and “set objective criteria and indicators” on which it will be possible to identify the better schools as well as those with worse results and seek to improve them.

Projects have been prepared by NÚCEM as well as the State School Inspection to prepare indicators which will be submitted for expert discussion and that based on these indicators the ministry should develop school financing methods as well as processes that will lead to improved quality and allow parents to choose the best school for their children, Repčíková said.

Sadloň also said that focusing on the quality of secondary education is important. He hopes that the Education Ministry will make an analysis of the results of the external tests since it is “necessary to identify strong and weak parts of the education process and strengthen cooperation in education at all levels”, including cooperation between secondary schools and universities. This would mean that universities take into account the results of students who want to attend them.

Moreover, Sadloň told The Slovak Spectator that the ministry should also focus on simplifying university entrance exams and postpone them to a later date so that students are better able to prepare for them.

He also stressed the importance of motivating students to continue their education at a higher level, and of creating an effective mechanism to finance schools that corresponds to the current needs of the labour market.