WHEN Brunella Borzi arrived in Slovakia four years ago she immediately felt younger, as the spirit of this small central European country reminded her of Italy back in the sixties and seventies, when it seemed that everything was achievable if the nation was willing to go for it. Borzi, Italy’s ambassador to Slovakia, soon discovered other positive facets of Slovak society, local peoples’ openness to Italian culture being one of them. 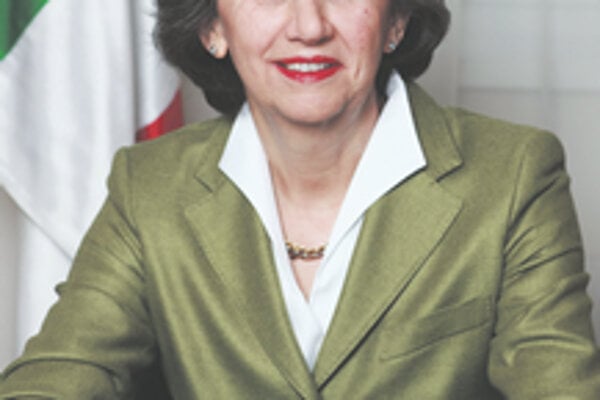 WHEN Brunella Borzi arrived in Slovakia four years ago she immediately felt younger, as the spirit of this small central European country reminded her of Italy back in the sixties and seventies, when it seemed that everything was achievable if the nation was willing to go for it. Borzi, Italy’s ambassador to Slovakia, soon discovered other positive facets of Slovak society, local peoples’ openness to Italian culture being one of them.

The Slovak Spectator spoke to Ambassador Borzi about the lessons Slovakia might learn from the success of Italy’s small businesses and its cultural diplomacy, as well as the importance of the Italian business presence here.

The Slovak Spectator (TSS): You will soon complete your diplomatic mission to Slovakia. What has been the most surprising aspect of Slovak society that you have observed?
Brunella Borzi (BB): I actually remember exactly what surprised me in a very positive way when I arrived in November 2008: it was this feeling of energy and enthusiasm that Slovak people had. I just had this sensation of finding myself in the atmosphere typical of my country back in the 1960s and 1970s; the feeling that here is a country which wants to do things and succeed in achievements. In some sense I felt younger because I remembered myself being Italian in the 1960s and 1970s, when everything looked as if it could be reached; the feeling that everything was in your hands, and that it was only a question of being willing to go for it.

Of course, Slovakia has had its moments of difficulties with the global crisis but now, again, my feeling is that there is this strong attitude to overcome the crisis, which is not only a national challenge but a much wider challenge for Europeans and also countries outside Europe.

TSS: What do Slovaks and Italians have in common?
BB: There is the very strong common ground of social and moral values. Catholicism creates some strong links between Slovakia and Italy, while I also have found that in Slovakia you have a strong sense of family. From a political point of view, we have shared interests within the European Union as well as NATO. Yet we also have evidence of the existence of strong economic ties: a large number of Italian entrepreneurs arrived in Slovakia almost 20 years ago, some of them very soon after the foundation of the Slovak Republic, and they felt immediately at ease. I think this is the best evidence of commonalities that we have.

TSS: Over recent years, Slovaks have been given a chance to taste Italian culture thanks to annual festivals featuring its different aspects. How do you assess the interest of Slovaks in Italian culture and language?
BB: Slovaks are completely open and our main test of this openness is the month of culture that we started organising three and half years ago. I recall that when I arrived I thought ‘let’s do it this year and see whether it is possible to build a tradition out of it’. We were uncertain whether we would be able to organise the event every year but I must say that we have been able to do it also thanks to the enthusiasm of the Slovak audience.

Last year we focused strongly on the celebration of the 150th anniversary of the unification of Italy. This year, however, there is no central leitmotif but more than 40 events will take place offering a wide cross-section of Italian culture, starting with the exhibition of a masterpiece by Jacopo Bassano on the occasion of the 500th anniversary of the birth of this great Renaissance painter. Particular attention will also be given to links with local culture. For example, the Elsa Morante Cinema Prize will be awarded to Italian director Marco Bellocchio and Slovak director Martin Šulík.

Moreover, the 5th edition of Dolce Vitaj will conclude in a very unusual and spectacular way: in early September the Slovak audience will be able to see an air show by our military air acrobatic team Frecce Tricolori in Sliač.

This year is the 60th anniversary of the twin city partnership between Bratislava and Perugia, and a delegation from the Italian sister town will pay a visit. I would say that this year the cultural festival will be an anthology: there will not be any main feature, but a composition of different ideas, events. We hope it will make for a nice mosaic.

TSS: Has Slovakia made it onto the radar of Italian tourists? If so, what do they find attractive about Slovakia?
BB: I have just requested figures for Italian tourists coming to Slovakia; there is again an increasing trend. There was a drop in 2010, but I suppose this was due to the crisis. But last year the numbers got back to those of the pre-crisis years. I think this is very much facilitated by the flight connections that are now getting more frequent, convenient, and very attractive for young people. A large share of Italian tourists in Slovakia are young people who are attracted by this recently born republic, which they are eager to discover since this part of Europe was not so widely known only a few years ago.

TSS: Small and medium-sized businesses are crucial for Italy’s economy, while small businesses are also products of their communities. What are the most important lessons that Slovakia can learn from Italy in the area of supporting small businesses?
BB: It is easy to reply to the first part of the question. Perhaps the inspiration that Slovakia can use from Italy’s experience is that small enterprises have more chance of surviving and succeeding if they unify themselves in what we call business districts or parks. There are already some examples here in Slovakia, for instance close to Bratislava, in Šamorín, there is an industrial district where there are a good number of Italian enterprises already operating. This is very much akin to the mentality of Italian small enterprises, especially in the northern part of Italy, the region where most Italian entrepreneurs come from. It is a good instinct for small enterprises to try to live together and find synergy; to exploit complimentary angles in their operation. This is a key factor for success.

In fact they save energy; they are sharing resources and know-how and work together in a very supportive way. Perhaps Slovakia needs a new generation of entrepreneurs who will realise how useful this synergy is and they will be willing to take a different way from the old pattern.

TSS: Slovakia now aspires to reform its education system, paying special attention to vocational training and teaching professions to student. Yet, some professions and crafts are gradually dying out because no one is interested in learning them. What is the situation in Italy, the home of many small manufacturers and successful small businesses?
BB: As a matter of fact, we are facing a similar problem in Italy where we lack young people who are dedicated to manual crafts or certain types of jobs. In Italy, we have been solving this situation partly through immigration. Perhaps, at a certain point, Slovakia too will have to absorb workers from different countries.

Yet I do not think that in Italy the old family-based businesses will die out. Of course now they are facing certain difficulties but the family-model enterprise will survive in Italy, because it is very much in our hearts and minds. It responds closely to a specific Italian way of being. After another difficult year I think these small enterprises will be the first to recover.

TSS: How do you assess the interest of Slovaks in learning Italian?
BB: The interest in studying Italian is increasing, and I have noticed that there has been a growing demand for teaching of the language, so the Italian Cultural Institute in Bratislava has always been successful in organising courses. The University of Economics in Petržalka has discovered the importance of Italian for businesses and thus now has an Italian chair. It is very symptomatic that Italian is not only perceived as a vehicle of approach to another culture, but also as an instrument for useful economic cooperation. A lot of young people are realising that Italian will boost their chances of succeeding in economic professions.

TSS: What would you show to your family or friends if they visited you here in Slovakia?
BB: I would like to show them Bratislava, because your capital is a beautiful town, with everything it takes to be an international town but in a very human dimension. The Tatra Mountains are also beautiful and remind me very much of the mountains in the northern part of Italy. We would visit the wooden churches and the other beautiful sites inscribed on the UNESCO World Heritage List such as Banská Štiavnica, Levoča, Vlkolínec.

I have found my diplomatic mission in Slovakia very rewarding and Bratislava a very attractive place to live and work. It will remain in my heart and mind.