Three dead and two wounded after police shooting in Hurbanovo

An off-duty municipal police officer shot three people dead and seriously wounded two others in the town of Hurbanovo in southern Slovakia on Saturday, June 16. The police officer is now under detention and could face charges of murder or premeditated murder, the TASR newswire reported. 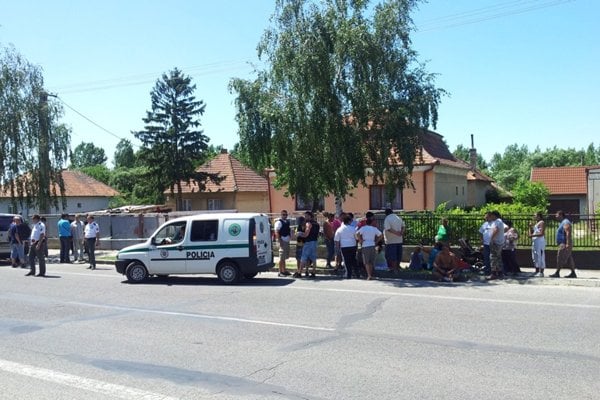 An off-duty municipal police officer shot three people dead and seriously wounded two others in the town of Hurbanovo in southern Slovakia on Saturday, June 16. The police officer is now under detention and could face charges of murder or premeditated murder, the TASR newswire reported.

The incident started shortly after 10:00 on Saturday morning. The shooter, identified only as Milan J. aged 51 from the village of Svätý Peter, drove his passenger car to the front of a house at Komárňanska 5 street in Hurbanovo that is occupied by a Roma family. Milan J. left his car and started shooting with a gun that was not licenced to him, TASR wrote. He allegedly shot dead a 44-year old man, his 19-year old son and 24-year old son-in-law. The fourth victim was the second son of the man, shot in the chest, and the fifth victim was the son’s wife, who was wounded in the leg; both are in hospital and the man’s condition is reported as serious. The police officer was not on duty at the time of the shooting, TASR wrote.

The police located the shooter about one hour later in a family house on Agátova steet where the mayor of Hurbanovo, Margita Zemková, lives. Media reported that he apparently wanted to inform the mayor about the shooting but she was not home at the time. The shooter threatened to commit suicide but after two hours of negotiations he voluntarily surrendered to the police, who detained him and took him to the police station for questioning.

The Interior Ministry told TASR that Milan J. has been working as a policeman for 20 years and there had never been any complaints about his service, adding that neither his colleagues nor the mayor had noticed any erratic or unusual behaviour. The ministry said Milan J. is married and has two daughters. Some residents of Svätý Peter told TASR that they were taken aback by the shooting, noting that Milan J. had not been aggressive in the past and that they are now afraid the shooting will cause unrest and the potential of revenge being taken by Roma.

Milan J. reportedly knew the residents of Komárňanska street, where two Roma families live in neighbouring houses, with Interior Minister Robert saying he had visited the houses during police duties. Four of the five victims of the shooting had criminal records according to Kaliňák. The Sme daily reported that the municipal police had recently detained some of those living at Komárňanska 5 due to a robbery of a precious metal. Milan J. and the victims of the shooting are of Hungarian nationality and the police stated they do not believe there was a racial motive behind the shooting, Sme wrote.

The shooting is under investigation, with the spokeswoman for the local police, Božena Bruchterová, telling Sme that the motive for the shooting is not immediately clear and Sme writing that neighbours had said some kind of “fishy business” was probably involved.