POSITIVE developments in Slovakia’s economy and jobs market during the first quarter of 2012 have prompted the central bank, the National Bank of Slovakia (NBS), to revise upwards its economic growth forecast for this year to 2.5 percent. But the bank warns that uncertainty about developments in some other eurozone countries and forthcoming domestic fiscal consolidation measures may reduce demand for Slovak products and services, and as a consequence may cause Slovakia’s economic growth to slow. 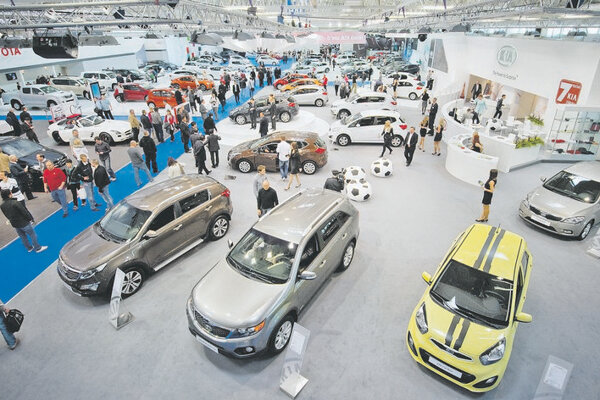 POSITIVE developments in Slovakia’s economy and jobs market during the first quarter of 2012 have prompted the central bank, the National Bank of Slovakia (NBS), to revise upwards its economic growth forecast for this year to 2.5 percent. But the bank warns that uncertainty about developments in some other eurozone countries and forthcoming domestic fiscal consolidation measures may reduce demand for Slovak products and services, and as a consequence may cause Slovakia’s economic growth to slow.

“This forecast is based, just as with the previous forecast, on the precondition that the financial crisis does not intensify any further, and on the revival of world trade growth and external demand as well as a gradual strengthening of domestic demand,” NBS governor Jozef Makúch said on June 12 as he introduced the bank’s regular medium-term forecast for 2012 and the following two years.
The central bank raised its forecast for GDP growth in 2012 by 0.4 percentage points, compared to its March forecast of 2.1 percent. For 2013 it held its forecast of 3.1 percent and for 2014 it increased the prognosis by 0.1 percentage points to 4.3 percent.

In late May, a little earlier than the NBS, the average GDP growth forecast for 2012 by commercial banks in Slovakia was also revised upwards by 0.5 percent to 1.9 percent, while the European Commission increased its forecast for Slovakia from 1.1 percent to 1.8 percent. This means that Slovakia should be one of a handful of EU countries to post relatively strong economic growth this year.

The central bank warns that its prediction was drafted during a period of relatively stable expectations in the eurozone and is based on data available up to May 15, i.e. before Spain sought a European bailout in early June. Also, the expected consolidation of the public finances in Slovakia was not taken into consideration because when the prediction was being prepared specific measures were neither known nor their impacts yet quantified. This fact, along with a possible worsening of the impact of the sovereign debt crisis, accounts for the main risk that economic growth will be slower than the central bank currently forecasts.

“Nevertheless, it is possible to estimate from preliminary information that [fiscal consolidation] measures will be adopted more on the income side and will be of such a character that they should not have a significant negative impact on GDP in the short term,” said Makúch.

“The main reason is our automotive sector, in contrast to the stagnating eurozone,” Valachy told the Hospodárske Noviny financial daily. “Here we see great growth in added value. It is obvious that we are growing much stronger than other neighbouring countries, but this is because of the automotive industry benefiting from new models.”

Poštová Banka analyst Eva Sadovská also sees the carmaking industry as being behind the positive development.

“Our economy is small, open and export-oriented,” Sadovská told The Slovak Spectator, adding that the success of the economy thus depends to a certain extent on the economies in Slovakia’s biggest trading partners, i.e. Germany and the Czech Republic.

But Sadovská stressed that China is becoming an important trade partner for Slovakia, since a significant portion of the cars manufactured in Slovakia are now exported there.

“This Asian partner can fill in the gap which might occur, for example, because of weaker demand from European customers,” Sadovská said. “The advantage of the car plants [in Slovakia], which expanded production during the first quarter of 2012, is also their production of new models of cars.”

Sadovská expects that economic developments globally or in Europe will impact Slovakia’s economy over the next few months.

“We have re-assessed our annual GDP growth forecast and increased it from 1.8 percent to 2.0 percent,” said Sadovská, noting that her bank’s forecast remains somewhat conservative and that it remains cautious about domestic consumption because of Slovakia’s persistently high unemployment and low real wage growth.

Sadovská expects that the shape and timing of the package of consolidation measures will affect public sector consumption.

“This means that it will be foreign demand in particular that will propel the economy forward,” said Sadovská, adding that Poštová Banka forecasts that unemployment will stay relatively high this year.

The central bank also took a more positive view of employment trends. Based on developments during the first quarter of 2012 it expects employment to increase by 0.4 percent, instead of 0.2 percent, in 2012. Its forecasts for 2013 and 2014 are now 0.6 percent and 1 percent respectively.
Slovakia’s 3-percent economic growth in the first quarter of 2012 was higher than both the eurozone average and the average for all EU members.

On the other hand, compared with the final quarter of 2011, which saw 3.4-percent GDP growth, the first quarter figure represented a slight dip. According to the Statistics Office, the slower first quarter growth was caused by a significant deceleration in foreign demand.