THE ORGANISERS of Slovakia’s third Rainbow Pride march, held on June 9, advised those who planned to turn up and show their support for the rights of lesbian, gay, bisexual and transgender (LGBT) citizens to be careful and take precautions with their personal safety. They recommended that attendees leave the event in groups, even if this meant teaming up with strangers, and that before doing so they remove rainbow insignia from their faces with a damp napkin, peel off stickers and pack away banners. The advice was mainly in response to the violence witnessed during the first-ever Rainbow Pride march in May 2010, when around 100 anti-gay protesters, including dozens of supporters of an extremist political movement, attacked the parade, hurling stones and tear gas canisters. 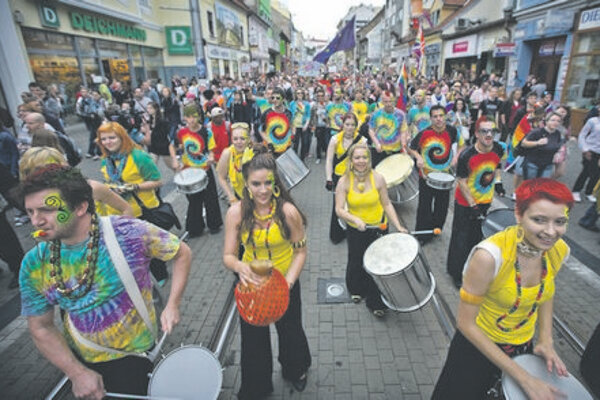 THE ORGANISERS of Slovakia’s third Rainbow Pride march, held on June 9, advised those who planned to turn up and show their support for the rights of lesbian, gay, bisexual and transgender (LGBT) citizens to be careful and take precautions with their personal safety. They recommended that attendees leave the event in groups, even if this meant teaming up with strangers, and that before doing so they remove rainbow insignia from their faces with a damp napkin, peel off stickers and pack away banners. The advice was mainly in response to the violence witnessed during the first-ever Rainbow Pride march in May 2010, when around 100 anti-gay protesters, including dozens of supporters of an extremist political movement, attacked the parade, hurling stones and tear gas canisters.

This year no major clashes occurred, but police still had to intervene at the start of the rally when an unidentified person threw a smoke grenade into the crowd which had gathered in Námestie Slobody (Freedom Square), the start point. Ultimately, it was rain rather than extremists that dispersed the 800-strong crowd, most of them under 25 years of age, once the march had reached its destination, SNP Square.

About 100 police officers monitored the event, assisted by a helicopter circling overhead; members of a police SWAT team also blocked off roads where members of People’s Party - Our Slovakia (NSĽS) – a far-right political group headed by former leaders of the banned extremist movement Slovenská Pospolitosť – might have been able to confront LGBT supporters, the TASR newswire reported.

“Nothing and no one could break the pride of LGBT people; our community is able to come together,” said Romana Schlesinger, one of the march organisers, during her opening remarks to the crowds.

At the end of the march, Schlesinger, who is a member of the Queer Leaders’ Forum, described it as “monumental” and said that there were only occasional expressions of intolerance.

The rally began in Freedom Square with three symbolic wedding ceremonies, in which gay, lesbian and heterosexual couples exchanged vows on a stage. Later, the participants marched to the Government Office and then through nearby streets to the more central SNP Square.

The event was endorsed by Amnesty International Slovensko, Bratislava mayor Milan Ftáčnik and two members of the European Parliament, Ulrike Lunacek from Austria and Monika Flašíková-Beňová from Slovakia. Ftáčnik had said ahead of the march that he hoped Bratislava would maintain its image as a tolerant city.

Two religious groups, the Association for the Protection of the Family, and Citizens for Christian Values and Traditions, organised a march to oppose Rainbow Pride and to support what they called “the traditional family”, while religious groups held prayers in various parts of the city.

Prime Minister Robert Fico released a neutral statement, remarking that “as far as any gathering is in line with the laws and its participants respect all the regulations,” he would respect it as an expression of the fulfilment of basic rights and freedoms.

“I am here to support human rights,” Ambassador of Norway to Slovakia Trine Skymoen told The Slovak Spectator. “The rights of the LGBT community are universal human rights and that’s why I’m here, to celebrate them and to mark them together."

Skymoen was one of 18 foreign diplomats who before the march issued a joint statement expressing their moral and practical support for the parade organisers and participants in their right to peacefully assemble to express their human rights and raise awareness of LGBT rights in Slovakia.

The diplomats’ statement said that LGBT citizens in Slovakia enjoy all the legal guarantees that come with European Union membership, but that beyond EU guarantees, everyone, including LGBT people, should be free to enjoy the rights and freedoms laid out in the Universal Declaration of Human Rights.

The diplomats stressed that they “do not ask anyone to abandon their principles in the public debate that occurs in any democracy” but that they believe that everyone should have the right to express their view without fear of retribution or reprisal.

However, Ján Figeľ, the leader of the Christian Democratic Movement (KDH) and a former European commissioner, described the diplomats’ statement as contradictory. Figeľ stressed that Slovakia respects all its human-rights-related obligations and bans discrimination and that the constitution guarantees equality before the law for everyone. Figeľ said some of the demands of the LGBT community went beyond the framework of the constitution and were not part of the legal order in many of the countries that the ambassadors themselves represent.

“I consider this repeated initiative by the ambassadors to be inappropriate,” Figeľ stated.
The Ambassador of the Netherlands to Slovakia, Daphne Bergsma, in an interview with The Slovak Spectator said that even if people oppose the march they should not restrict the right of others to march and express their opinion.

“Homosexual people live among us and it is not ‘us’ and ‘them’ but it is ‘us’,” said Bergsma, adding that a friend or a colleague could be gay but other people do not always know it because the person may not be in a position to “come out” and reveal his or her sexual identity.

Schlesinger told The Slovak Spectator in an earlier interview that the media is partly responsible for homophobic sentiment in Slovakia, saying that some journalists tend to take a scandal-driven or tabloid approach when covering the issue of homosexuality. In her interview, she highlighted the use of photos, for example from previous Pride marches, where media outlets intentionally selected stereotypical images to illustrate their coverage.

The rise of the internet and different channels through which people can get information means that LGBT activists are wiser, said Schlesinger.

“About 30 years ago people were coming out when they were 20 or 30 years old; now they do so when they are 16 and I suppose this is a positive trend,” she told The Slovak Spectator.

About 50 young parents with children, with the backing of Christian churches, formed a human chain in front of the parliament building in Bratislava to express their support for what they called “traditional values” and heterosexual marriage. Some wore T-shirts with slogans such as “The family is wonderful and special because children are our future” and “Mum and dad forever, there is nothing better for children”. The activists wore red ribbons that they said symbolise their link with all past generations, TASR reported.