FRENCH culture is generally appealing to most people and it has many fans in Slovakia. In addition to language courses, literary events and song contests, the French Institute in Slovakia, the French embassy and other French organisations offer a host of regular events such as classical, jazz and modern music, art and historical exhibitions, a language café, a video-art festival, cutting-edge plays at the theatre festival in Nitra, and even an exhibition about creative design of cities. Almost everyone can find something offered by France that matches their tastes. 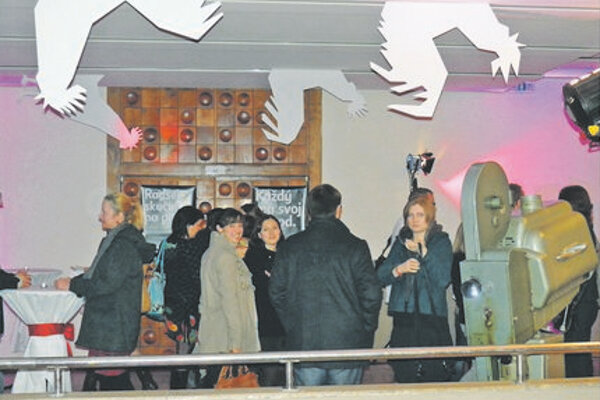 FRENCH culture is generally appealing to most people and it has many fans in Slovakia. In addition to language courses, literary events and song contests, the French Institute in Slovakia, the French embassy and other French organisations offer a host of regular events such as classical, jazz and modern music, art and historical exhibitions, a language café, a video-art festival, cutting-edge plays at the theatre festival in Nitra, and even an exhibition about creative design of cities. Almost everyone can find something offered by France that matches their tastes.

“The French Embassy and the French Institute are interested in giving French culture a greater audience in Slovakia with high-quality events. It means taking initiative or bringing in partners for events that people expect, or sometimes making them discover new aspects of French culture. Slovaks know that we provide, together with Slovak institutions, some outstanding events every year,” Jean-Marie Bruno, the French Ambassador to Slovakia, told The Slovak Spectator.

A memorable day for France is July 14, 1789 when the Bastille, a prison and a symbol of the repressive reign of King Louis XVI was taken over by citizens and completely demolished – one of the first actions of the French Revolution. The French Embassy is organising its second celebration of this anniversary in Slovakia and this year it will be on July 12. From 15:00 until about 22:00, the Main Square in Bratislava will host Slovak and Czech artists who will dance the can-can, present Slovak folklore, sing French chansons as well as Celtic and Breton music on bagpipes and Western-African percussion rhythms. Eva Bosáková from Košice, the winner of this year’s French Song Contest, will also perform as well as Les Dessous de la Vie, a French band from Strasbourg.

Another traditional event is the International Festival of Francophone Films in Bratislava (FIFFBA) which provides a close insight into the rich cinematography coming from Francophone countries inside and outside Europe. The festival took place this year between April 12 and 15 in the Mladosť and Lumiere cinemas in Bratislava and premiered several Francophone films to Slovak audiences as well as documentaries, short films and three recent Slovak films. “FIFFBA attracted 4,000 spectators in four days in its 14th edition”, Bruno stated.

France also participated in Slovakia’s Days of Architecture and Design by organising an exhibition called Saint-Etienne, City of Creative Design for All that was available at the Faculty of Architecture of the Slovak University of Technology from May 15 until June 8. The exhibition showed how this French city, confronting environmental challenges, globalisation and flagging local competitiveness, found a way to use the creativity of its residents and motivate them with its Cité du design (City of Design) initiative. Several lectures at the university were presented while the exhibition was ongoing. The activities generated within Cité du design led UNESCO to inscribe Saint-Etienne as a City of Design and since November 2010 the city is also designated as one of UNESCO’s Network of Creative Cities.

Several events sponsored by French organisations have taken place outside of Bratislava. The finals of the French Song Contest were held in Banská Bystrica this year and the Cap á l’Est cultural festival in Banská Štiavnica in the summer of 2011 included a piano concert by Adelaide Panaget and “learning French in a playful way” for students of the French language.

The P. M. Bohúň Gallery in Liptovský Mikuláš exhibited Classic Modern Art from France after it was presented in Bratislava and Košice. Recently, a conference called Innovative City was organised in Košice that focused on using public areas within a city or town in modern and creative ways. And Polyphonia, a 54-member orchestra of students from the French island of Réunion, played in the new amphitheatre in Kechnec in July 2011.

It is nearly impossible to list all the events that have a touch of French culture or directly bring French culture to Slovakia but some of the more memorable offering have been: Olivier Culman’s exhibit Tendance Floue that was part of Bratislava’s Month of Photography in November 2011; concerts performed by organists Olivier Latry and Irénée Peyrot; the French play Paranoia by Rafael Spregelburd presented by Théâtre des Lucioles from Rennes at the Nitra theatre festival; Hospitalités (Hospitalities), an exhibition of contemporary video-art; concerts of French music performed by the Slovak Philharmonic under the baton of its principal conductor, Emanuel Villaume; and the performance by Orchestre National de Lille.

In addition to the July 12 event on Bratislava’s Main Square called Let Us Together Celebrate the Conquest of the Bastille!, the Trimmed Reality exhibition will open in the gallery of the French Institute from June 20 to July 27, and the language café for all lovers of foreign languages, including French, will continue to be held every first Wednesday of the month in the KC Dunaj cultural venue.

“We want to positively contribute to public discussion and exchange ideas regarding important issues for Slovak society. We definitely see the theme of improving cities as a cross-cutting issue involving citizenship, architecture and design, environment and economic competitiveness. We will organise a series of conferences and discussion on this topic. We will also use this theme in many events putting artistic creation at the heart of urban regeneration,” Ambassador Bruno told The Slovak Spectator, pointing to the recent Saint-Etienne exhibition in Bratislava and the Innovative City conference in Košice. “And together with the Culture Ministry we are planning an important exhibition in one of Bratislava’s famous monuments in the months to come.”