MILOSLAVA Zemková was the ninth director that Slovakia’s public-service TV broadcaster had in the 19 years since Slovak independence. But her five-year appointment to manage Radio and Television of Slovakia (RTVS), the country’s recently merged public-service broadcaster, was cut short by a secret ballot vote in June, after Smer party insisted that she be sacked for what it called her failure as director to inform the governing body of the broadcaster about the launch of a crucial tender. Zemková, who oversaw the merger of Slovak Radio (SRo) and Slovak Television (STV) into a single broadcaster, responded that there were no legal grounds for her dismissal and she was prepared to turn to the Constitutional Court. 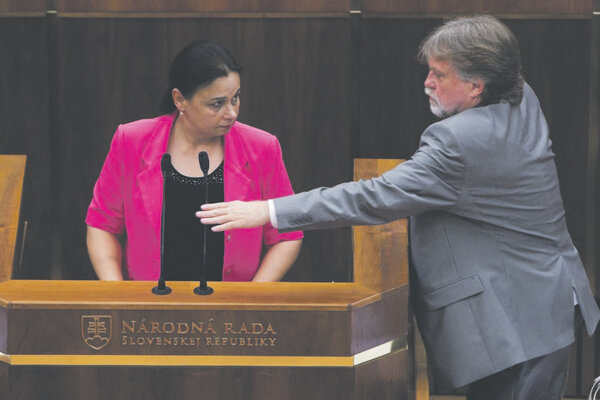 MILOSLAVA Zemková was the ninth director that Slovakia’s public-service TV broadcaster had in the 19 years since Slovak independence. But her five-year appointment to manage Radio and Television of Slovakia (RTVS), the country’s recently merged public-service broadcaster, was cut short by a secret ballot vote in June, after Smer party insisted that she be sacked for what it called her failure as director to inform the governing body of the broadcaster about the launch of a crucial tender. Zemková, who oversaw the merger of Slovak Radio (SRo) and Slovak Television (STV) into a single broadcaster, responded that there were no legal grounds for her dismissal and she was prepared to turn to the Constitutional Court.

“I was prepared for that because everything indicated that there are no legal or professional arguments involved, but rather political arguments … which I had no way to enter because I do not represent any political party,” Zemková stated, as quoted by the SITA newswire. She argued that the reasons for her dismissal were entirely artificial.

After the opposition parties boycotted the vote, dubbing it an effort by Smer to assert political control over the public broadcaster, 82 of the 85 deputies present in the 150-seat house voted in favour of Zemková’s dismissal. Smer holds 83 seats in parliament. The MPs’ decision prompted concern among watchdogs about curtailment of media freedom.

However, some figures in the local media are already reported to be eyeing the high-profile job for themselves. The head of TASR, the state-owned newswire, Jaroslav Rezník, might find himself competing with Václav Mika, a former director of Markíza, the leading private TV station, for the RTVS top job, according to the Sme daily. Zemková was previously Rezník’s replacement in the top job at SRo.

Until the new director is selected, RTVS will be managed by its economic director, Daniela Vašinová, and the adviser to the general director, Peter Ondro.

The chairman of parliament’s culture and media committee, Smer MP Dušan Jarjabek, said that parliament might be able to elect a new head of RTVS as early as August. Jarjabek, speaking on June 27, refused to comment on specific candidates.

“Talking about names would be speculation and every candidate should be given a chance,” said Jarjabek, adding that playing favourites would be unfair towards those who have not made their minds up yet, SITA reported.

The reasons for the ousting

The parliamentary vote came in response to a request from the committee for culture and media, that argued Zemková on April 3 this year had published a call for bids to lease new premises for RTVS, which currently operates from two separate buildings, without first informing the RTVS Council, the broadcaster’s governing body, about the move. Jarjabek, the committee chairman, stated that by failing to do so Zemková had violated the law since the contract could have been worth more than €100,000. The council learned about the call on April 19, SITA reported.

“I hate to do this because the law is wrong,” Jarjabek said, as quoted by TASR. “However, my hands are tied here.”

If the parliamentary committee had not taken any action, it would itself have been in breach of the law, Jarjabek claimed.

Yet Zemková argued that since the outcome of the call could at most have been only a preliminary agreement to sign a future contract, she was not obliged to notify the council. Zemková said she had received three independent legal opinions stating that she had not made any errors, adding that the law on RTVS states that the general director need only report an intention to sign an agreement with a specific bidder after the name of the winner, price, terms and all details are available, and that a contract must be worth more than €100,000, according to SITA.

A violation of the law on RTVS is the only legitimate grounds on which parliament is able to dismiss the head of the public-service broadcaster, after ministerial powers of removal and appointment were eliminated by the previous government and given to parliament.

Miroslav Kollár, chair of the RTVS Council, said that he does not believe that Zemková violated the law. Kollár explained to SITA that he had criticised Zemková for not informing the council for starting the tender and did not consider it proper communication between the general director and the council, but added “I do not think that it was a breach of the law”.

Pavol Múdry, deputy chairman of the board of the International Press Institute (IPI), a media freedom monitoring group, suggested that the proceedings in this case represented an intervention by the state into the country’s media environment.

“It is not about specific persons, positions or names, but the principle that for the sake of politics or a political party, once again a reason was found to intervene politically in the media,” Múdry told The Slovak Spectator.

Slovakia’s Mass Media Trade Union (OZM) campaigned against the recall of Zemková while UNI MEI, a global union organisation which among other things represents the interests of media and entertainment industry employees, called her recall a political move which might endanger the independence of the public media.

“UNI MEI supports OZM in their view that the dismissal was a political move and an attack against the independence of public-service broadcasting,” read a statement published on the organisation’s website.

Earlier in June, the European Broadcast Union (EBU) also said that it would closely watch developments around efforts to dismiss Zemková.

“Such pressure is at odds with the principle that public-service media have to be independent from political influences,” stated Ingrid Deltenre, the EBU chair, in a letter sent to Zemková, SITA reported.

The letter of complaint

The committee reportedly acted after receiving a letter from Peter Lisý, a logistician for the auto industry who has been living abroad for about two years. His letter criticised Zemková’s intention to sell the two buildings where RTVS has offices and claimed that she “will use the proceeds for construction of a new building”, the Sme daily reported.

“I do not watch RTVS broadcasts,” he said, as quoted by Sme. “I turned to the committee for culture and media only because I care about efficient use of money by the state.”

Though his letter reportedly served as a spur for the committee to move to dismiss Zemková, Lisý told the daily that he could not evaluate her performance since “I do not know her”. He said he had not expected that his letter would serve as the reason for her dismissal.

The parties that made up the previous government and set up RTVS, who are now in opposition, say that the move to dismiss Zemková is a naked attempt by Smer to take control of the broadcaster. Smer assumed power after winning a clear majority in the March general election, and its strength in parliament means the opposition could do little to stop Zemková’s removal.

“It is a very impatient effort to take control over RTVS as soon as possible, but in a very clumsy way,” said Daniel Krajcer, the former culture minister and now an MP for Freedom and Solidarity (SaS), as quoted by TASR. He alleged that Smer wants to control the public-service broadcaster.

Ivan Štefanec of the Slovak Democratic and Christian Union (SDKÚ) said that by sacking Zemková, Smer is continuing its move to fill all senior posts. Igor Viskupič of the Ordinary People and Independent Personalities (OĽaNO) called the recall a political execution, while Most-Híd also claimed that there was no legitimate reason to sack Zemková.

Zemková was appointed to her job in February 2011, after having been approved by 80 out of 137 MPs present in a recorded vote in parliament. Zemková had earlier competed head-to-head in a run-off vote with TASR chief Rezník.