ON JUNE 6, Klub za Zrkadlom in Petržalka hosted a performance featuring bassist Oskar Rózsa and his trio as well as another group, The Illusions Trio, as part of the PetJazz festival summer edition. For this performance, Rózsa was backed by his usual keyboard sideman, Eugen Vizváry, and drummer Michal Fedor of The Illusions Trio who sat in because Rózsa’s regular drummer was unavailable. 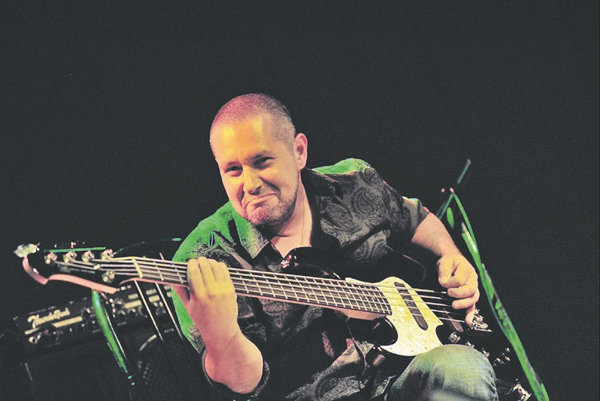 ON JUNE 6, Klub za Zrkadlom in Petržalka hosted a performance featuring bassist Oskar Rózsa and his trio as well as another group, The Illusions Trio, as part of the PetJazz festival summer edition.
For this performance, Rózsa was backed by his usual keyboard sideman, Eugen Vizváry, and drummer Michal Fedor of The Illusions Trio who sat in because Rózsa’s regular drummer was unavailable.

“The Oskar Rózsa Trio does not have a fixed line-up,” Rózsa told The Slovak Spectator. “When we play Eugen’s tunes, for example, then we call ourselves the Eugen Vizváry Trio. On that evening we played mostly my compositions, so for that night we were the Oskar Rózsa Trio.”

Swimming outside the mainstream

Swimming as he does outside the musical mainstream, Rózsa has tended to eschew a mass following throughout his long career but he is well respected as a serious musician who leaps across various genres with light feet. So he does not have trouble getting cooperation from both young, upcoming musicians as well as more established persons, and not just from Slovakia. In 2008, he recorded his Universal Cure album with American folk guitarist John Shannon.

“I still enjoy the music,” Rózsa said. “That is good because a lot of musicians play so much they grow to hate it. I am lucky because I love to play and I love to listen to music. I listen to everything – from Baroque symphonies to modern electronic music, as well as jazz, rock, punk-rock, world music, pop tunes, film music – simply good-quality music.”

Rózsa told The Slovak Spectator about some of his numerous ongoing projects. Among them are plans to develop a new club show with Slovak guitarist Andrej Šeban; to prepare a tour with legendary Prague rapper Oto Klempíř; to compose music for the Theatre of the Homeless (Divadlo bez domova); and, in his spare time, to start another band called Heavy Smokers where he and some friends will perform their own compositions, inspired by the music of 1960s and 1970s.

One of Rózsa’s most esoteric enterprises involves a Canadian musician who composes pieces that intersperse the sound of nature with accordion music.

Andrej Karlík, the leader of the other group, The Illusions Trio from Prešov, told The Slovak Spectator that the two bands became acquainted through their drummers and began to give concerts in various combinations. In the Summer PetJazz, The Illusions Trio opened the show, playing tunes from last year’s album Asperatus. Karlík said his group’s music was more appropriate for smaller clubs but added that they have played a few jazz festivals, including shows in Greece, Croatia, the Czech Republic and Poland, as well as at Bratislava Jazz Days 2011.

“Our future plans are limited by the fact that we are still students,” Karlík said with a smile. “I passed my final exams at the conservatory just this morning.”

The Summer PetJazz has been a first attempt to expand the event otherwise taking place in December to June, to make one more jazz concert before the doors of the music club close for the vacations.