There is a real chance that more people will get sick from eggs that could be contaminated with salmonella, said Agriculture Minister Ľubomír Jahnátek at a press conference after reporting that possibly 1.8 million spoiled or illegally imported eggs may have made it into Slovak shops. 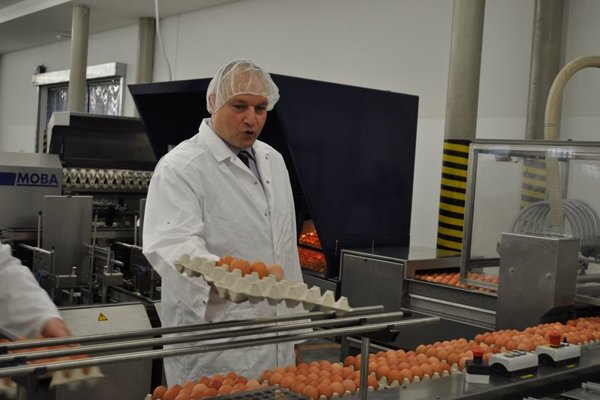 There is a real chance that more people will get sick from eggs that could be contaminated with salmonella, said Agriculture Minister Ľubomír Jahnátek at a press conference after reporting that possibly 1.8 million spoiled or illegally imported eggs may have made it into Slovak shops.

Nevertheless, the Agriculture Ministry refused to specifically name the brands of eggs that are suspected of contamination or spoiling until its investigation is completed. The State Veterinary and Food Administration (SVFA) did disclose that the producer of spoiled eggs found during its inspection at a Tesco store in Bratislava on June 19 had the identification code 430.

The ministry started investigating contaminated and unsafe eggs after 28 children became sick from salmonella-tainted eggs two weeks ago in the town of Komárno in southern Slovakia, the SITA newswire reported. That investigation showed that bacteria were also on the surface of the eggs that had been supplied from three companies based in Bratislava, Sereď and Trnava, according to the ministry, adding that these three companies do not have an egg grading line or appropriate storage facilities. The Agriculture Ministry ordered a toughening of inspections in retail stores as well as making random checks of trucks transporting eggs, according to press releases on the ministry’s website.
One inspection found contaminated eggs in a Tesco store in the Lamač district of Bratislava and Jahnátek said that store may be fined, SITA reported, adding that the minister also said if similar cases arise the Slovak government will close the stores. Tesco, a British-based retailer, told SITA that the eggs it had in its store had been previously approved by SVFA inspection so they cannot be considered illegal. But Paulína Komarová from the SVFA’s general manager’s office told The Slovak Spectator that the eggs were unmarked and that the law holds the seller responsible for their quality and safety.

“I am surprised that a big store network [Tesco] dared to place unmarked eggs on shop counters in their stores even after media attention of the whole case from last week,” Jahnátek stated, as quoted by SITA, adding that the firm had “acted against the law”.

The Tesco store in Lamač had been supplied by one of the previously-mentioned domestic egg producers, according to the Agriculture Ministry website. SITA wrote that Magda Tóth Železňáková, the spokesperson of Agriculture Ministry, had said that the eggs sold in Tesco had come from Larim SK Company. The general manager of Larim SK, Ladislav Hampl, rejected the claim by the ministry that his company was at fault, saying that the company has a record of a SVFA inspection finding that the eggs were safe and that the company is not responsible if the eggs had become spoiled or contaminated.

According to Jahnátek, the three companies investigated after the children became sick in Komárno did not have proper storehouses or cooling boxes and also distributed eggs based on forged bills of delivery and in some cases did not have a sales invoice. The ministry also reported that no document existed that confirmed that the contaminated eggs were produced in Slovakia or if they had been legally imported, SITA wrote.

The companies are now being investigated by the police and SITA reported that there are suspicions of forged documents and illegal transactions. Inspectors from the SVFA reportedly discovered a difference of 1 million eggs between the number reported as imported and shipped at one company, SITA wrote, as well as a document stating that one of the companies had a sorting line for eggs but that the firm does not actually have one. SITA also reported that about around 960,000 eggs had delivery bills with an incorrect identification number for sorting lines belonging to completely different egg producer. An official statement from the Agriculture Ministry noted that it suspected illegal re-packaging and use of unfamiliar markings for some eggs.

The minister of agriculture stated that he had “declared war with illegal imports of food” and initiated several actions to prevent similar incidents. Inspections by the SVFA will now be conducted around the clock, seven days a week, with the ministry stating that in the past loaded trucks had come to packaging facilities or warehouse after the SVFA inspectors had left for the day. The ministry announced there will now be three operational teams from the SVFA with ten inspectors each who will conduct random inspections without advance notice, according to the ministry website. The inspectors will primarily focus on importers at distribution centres and stores, Komarová of the SVFA told The Slovak Spectator.

“We have a strong suspicion that this sordid import of illegal and health-threatening foodstuffs is even made in cooperation with some stores,” Jahnátek stated, as quoted on the Agriculture Ministry website.

Jahnátek also said that the most effective tool to prevent similar situations is to tighten up methods of detecting the illegal importation, distribution and sale of contaminated food and to make it a more serious crime.