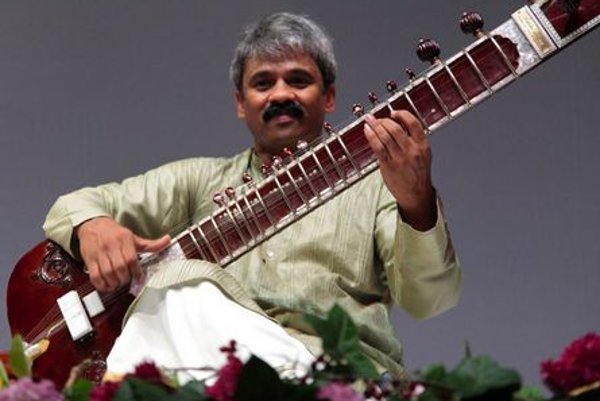 Bratislava
CONCERT: Pandit Rajeev Janardan is a master of classical Indian music, playing sitar in the Imdakhani Gharana style (which imitates singing). The recipient of many awards, he will play with Tibor Mótyán (Hungary, tabla) in “Connecting India” on July 9 at 20:30 in the Music Centre of the Zichy Palace, Ventúrska 9. Admission is free; for more information call 0902/892-872 or visit www.bkis.sk or www.shiraz.sk.

Bratislava
WATERSPORTS FESTIVAL: Festival divokej vody / White-water Festival – The Divoká voda complex in Čunovo will host a unique sports and entertainment event for all age categories, and for professionals and amateurs alike. The 1st year of this European festival will allow amateurs guided by instructors to test runs used in the world championship. Accompanying events include a race by professionals, a training session by the Slovak national canoeing team, and more.
Starts: July 14, 9:00-20:00; areal Divoká voda, Čunovo. Admission: free. More info: www.divokavoda.sk.

Bratislava
INLINE SKATING: The Staromestská / Old Town route of the usual Friday inline ride will be marked by music in the style of Michael Jackson’s Thriller.
Starts: (each Fri) July 13, 20:00; behind the new building of the Slovak National Theatre, Pribinova 17. Admission: free. More info: www.bratislava-inline.sk.

Bratislava
FILM: The Slovak movie Anjeli / Angels, only recently released for screening, is an intimate story of fatally ill homosexual who withdraws to a cottage in the countryside to finish his book of memories, accompanied only by a nun who nurses him, and his boyfriend. However, suddenly appear several people, and the plot takes unexpected turns. This week, the film will be screened with English subtitles.
Starts: July 11 (17:30), July 12 (20:00), July 13 (18:00) and July 14 (20:00); Lumiere Cinema, Špitálska 4. Admission: €4. Tel: 0917/105-882; www.aic.sk/aic/kino-lumiere.

Bratislava
EXHIBITION: Peter Machajdík - Waters and Cages – The sound-and-visual environment of Machajdík reflects the economic and social goals of our civilisation, but also muses on environmental and political issues. Bringing a balanced combination of components, it offers pleasure and saturation for all the senses.
Open: Tue-Sun 11:00-18:00 until Sep 2; Pálffy Palace of the Bratislava City Gallery (GMB). Admission: €2-€4. Tel: 02/5443-3627; www.gmb.sk.

Kittsee-Austria
BALLET / HISTORY: Renaissance Evening – The core of this evening is the classical ballet Romeo and Juliet, as performed by the Balet Bratislava troupe with soloists from the Rapids Ballet Company of Michigan, USA (including Patricia Baker). The ballet will take place at the Kittsee Mansion, in the grounds and on a stage, as well as among the audience. The period atmosphere will be enhanced with medieval cuisine and period musical accompaniment. (On July 14, Slovak singer Katka Koščová will also perform a gig).
Starts: July 13, 14, 20:00; Schloss Kittsee, close to the Slovak border. Admission: €22 (in advance) - €25 (on the door), children €12 (€15). More info: www.kittseetanz.at.

Kežmarok
FESTIVAL: The 22nd year of the Európske ľudové remeslo / European Folk Craft (EĽRO) festival in Kežmarok will focus on traditional bakery and millers and masters of this craft. However, it will also bring about 200 local and foreign craftsmen, a cultural programme on three stages, dramatic castle tours and a ride on an historical train from Poprad through Kežmarok to Podolínec. The main part of the festival will take place in the historical centre of Kežmarok between July 13 and 15. Tickets cost €3 (in advance), €5 (on the day) for one day, or €10 for all three days. More information can be found at www.elro.sk.

Košice
JEWISH FESTIVAL: Mazal Tov! Festival židovskej kultúry / Festival of Jewish Culture – This festival, whose name means ‘a lot of luck!’, claims to be the first festival of Jewish culture in Slovakia. It started in late June / early July with guided tours of Košice focused on Jewish historical sites, and continues with an exhibition opening on July 9 and a concert of the Mojše Band. Founder of the Klezmatics, trumpet player Frank London, will perform with jazz saxophonist Paul Shapiro and the Pressburger Klezmer Band, and with the PaCoRa trio. The festival also includes a musical workshop with Michal Paľko, a dance workshop with the Pressburger Klezmer Band, a lecture on kosher wines and tasting, as well an artistic workshop and screening of the Czech movie Golet v údolí / Golet in the Valley.
Starts: July 7-17; various sites. Admission: various, form free (discussion, film screening, exhibition) through €8-€10 (concerts, dance workshop) to €19 (for lecture on Kosher wine). Tel: 0903/318-483; www.mazaltov.sk/en.