Café of the City awards

THE WINNERS of the Café of the City (Kaviareň mesta) competition that was held during the month of May in Bratislava and Košice have been announced. 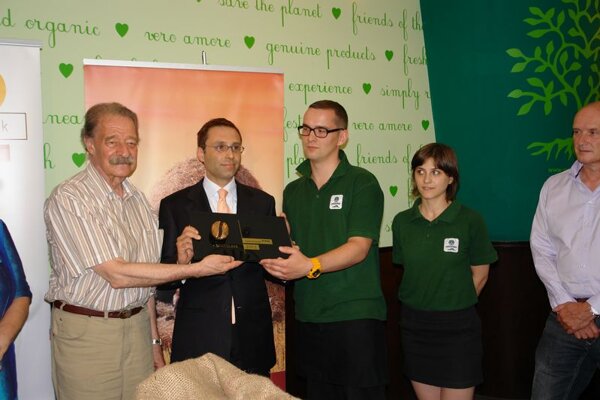 THE WINNERS of the Café of the City (Kaviareň mesta) competition that was held during the month of May in Bratislava and Košice have been announced.

The cafés were judged by walk-in customers as well as by experts from Slovakia’s Coffee Quality Institute. The winners were selected from 16 finalists in Bratislava and seven in Košice.

Organiser Denisa Priadková told The Slovak Spectator that “the aim of the event was to educate the public about what makes a good coffee so they can demand that cafés improve their quality”.

According to the contest rules, each café must have been open for at least 12 consecutive months and must serve at least three types of coffee. The cafés were nominated by coffee experts and importers as well as by city officials. Customers voted based the taste and quality of the coffee as well as the café’s service, pastries and general atmosphere.

The winner in Bratislava was the Greentree Caffé in the Polus shopping centre. Greentree won the right to display the Bronze Coffee Bean statuette based on the quality of its coffee as well as its chic Italian atmosphere. Second place went to McDonald’s McCafé in the Eurovea shopping centre, followed by Julius Meinl in the MY (Tesco) department store in downtown Bratislava. Among cafes outside of major shopping areas, the Shtoor Home Made Café at Strakova 5 finished fifth overall and the Next Apache at Panenská 28 placed seventh. A record number of customers, 10,000, voted for their favourite café.

“Sometimes, the evaluations of the public and experts differed,” Priadková said. “The customers seemed to favour places that draw crowds. Since there are many people in shopping centres, the owners don’t have to try so hard because their customers will come anyway.”

The coffee experts picked the Café Dias on Poštová Street as number one by a wide margin, followed by the Emporio Café in Aupark, and Café Primaciál in the Primatial Palace.

In Košice, about 1,500 customers voted Chilli Café on Floriánska Street as the winner, followed by the Jazz Café in the Optima shopping centre and the Fashion Café in the Galéria shopping centre.
.
More information about the Café of the City competition can be found, in Slovak only, at: www.skvelakava.sk.