Finnish glass on show in Bratislava

FINNISH GLASS Art 2005-2010 is a travelling exhibition of glass works from the Finnish Glass Museum in the town of Riihimäki. This is the sixth exhibition of works over a five-year period and offers about 200 glass objects by 62 designers and artists. 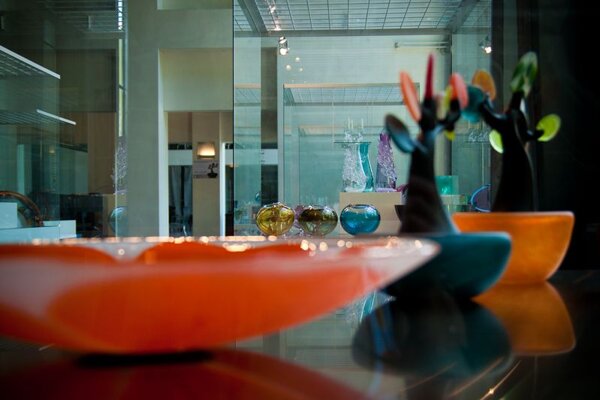 FINNISH GLASS Art 2005-2010 is a travelling exhibition of glass works from the Finnish Glass Museum in the town of Riihimäki. This is the sixth exhibition of works over a five-year period and offers about 200 glass objects by 62 designers and artists.

The Finnish Glass Museum was founded in 1961 and was originally located in a former glass factory designed by Tapio Wirkkala but it moved to its current building in 1981. Though Finland is no longer mass producers of glass products, the country’s glass designs remain famous and some of the works were produced in glass factories in Germany and Turkey according to Uta Laurén, the exhibition’s curator.

“In 1985 the Finnish Glass Museum began its work of documenting and compiling the best reference works, the flavour of five-year periods, opportunities and achievements of the Finnish glass industry and glass art in as much detail as possible,” Laurén said at the opening in the Design Factory premises in Bratislava on June 21. “Accordingly, six five-year periods have been recorded in this manner up to 2010. Since 1995 the exhibitions were turned into internationally touring exhibitions,” she added.

“The Scandinavian ideology of design relied on presenting the personality and the name of the designer together with individually-named collections, so that consumers could be sure that the products were items of the best taste, accepted by experts,” Laurén stated.

Finnish success at trade fairs in Milan became the cornerstone for international recognition of Finnish glass art and design in the 1950s – as part of the so-called “golden age” of the country’s glass art.

“Since Finnish glass is famous for its high standards of design, its relationship and close connection with art has sometimes been regarded as problematic,” Laurén said, adding that “functionality is expected even from art objects. Nevertheless, the studio-glass movement and concept of glass as media has not been forgotten”.

The Finnish glass on show

Asked how she had chosen the 62 artists for the travelling exhibitions from the 150 which are represented in the Finnish Glass Museum in Riihimäka, she told The Slovak Spectator that the criterion was quality and an effort to show the full range of Finnish glass – household objects, designer pieces and decorative artworks with no practical use. The artists range in age from 25 to 80, have different backgrounds and professional careers; some specialise only in glass while others use it only as one of their materials.

Laurén noted that glass production in many parts of the world, not only in Finland, has been influenced by energy costs and the recent financial crisis. The remaining glass factories in Finland no longer employed their own designers and mass production moved from Finland to other countries. “The future of Finnish glass depends to a great deal on individual glassblowers and glassmakers,” she said.

Heikki Matiskainen, the head of the Finnish Glass Museum said at the Bratislava opening that the glass industry’s current crisis is not only a Finnish phenomenon, but a European or perhaps a global issue that can be partially ascribed to an increase in production costs as well as several other complex factors.

The travelling collection will continue to Hungary, France, and Germany and when it returns home some of the items will go to collectors and the artists, some will stay at the museum and a large portion will be sold through the museum’s catalogue.

When asked whether there was a typical or characteristic kind of Finnish glass, Matiskainen told The Slovak Spectator that the country’s artists were rather individualistic in their approach and that the selection of works and artists for the exhibition was subjective, with his and the curator’s taste being the decisive factor.

The Embassy of Finland in Slovakia provided financial support for the exhibition that will remain at the Design Factory, Bottova 2, until July 27 with hours from 10:00 to 18:00 on workdays. The Finnish ambassador, Jukka Leino, attended the opening and told The Slovak Spectator that in addition to being part of the Finnish economy, glass design is part of everyday life in his country and that the form of objects used in daily life can influence one’s perception of art.