IN MID June, Polish, Czech, German and Slovak outlaw bands met in Terchová, the birthplace of legendary Slovak outlaw Juraj Jánošík, where they competed in feats of strength, skill and derring-do, not to mention cooking goulash. 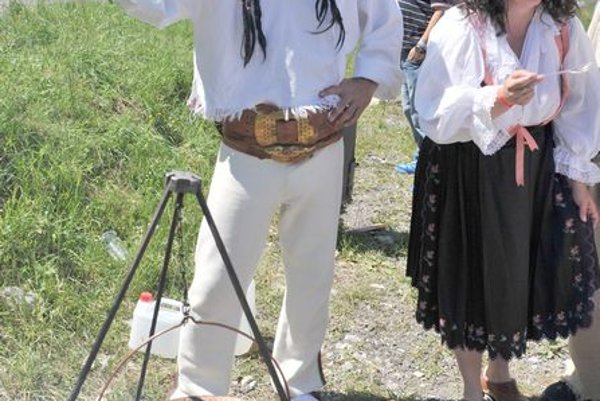 IN MID June, Polish, Czech, German and Slovak outlaw bands met in Terchová, the birthplace of legendary Slovak outlaw Juraj Jánošík, where they competed in feats of strength, skill and derring-do, not to mention cooking goulash.

They walked the paths of the outlaws of old, plodding all the way up the steep trail to the statue of Juraj Jánošík. Apparently all the would-be bandits survived the climb though a few muttered complaints that the chair lift was not operating. At the top of the mountain they gathered at the statue of their hero Jánošík and sang folk songs and posed for photos.

The modern-day bandits later visited the Jánošík museum in Terchová, took pictures near a new wooden statue of Jánošík and read the rather vivid description of how Jánošík was hung up by a rib on a hook and allowed to slowly die.

Slovak mime Miroslav Kasprzyk brought the bands of bandits to Terchová. “My group robs anyone we can find,” Kasprzyk boasted. “We are numerous and if God is willing there will soon be even more of us. It is useless to hew the valaška (typical local hatchet) in the doors – better to hew it in a back or a forehead. But we must arrange when and into whose head,” Kasprzyk announced with a straight face.

Whatever these ersatz bandits robbed from visitors was, of course, quickly returned after the ‘victims’ fulfilled certain tasks such as cracking a whip or undergoing a mock caning. After pondering the limitations of the bandits’ craft as a future occupation, however, these 21st century bandits concluded that today it is no longer a good idea to rob people and rather they should spread words of hope and good cheer among residents of towns and village.

“Now they have agreed to meet in Terchová each June and to entertain residents and tourists with their performances,” Jozef Mičo, the head of the Terchová Tourism Association told the TASR newswire.