Instead of music, discussions about media ethics, the Slovak judicial system and the Roma question will resonate in one of the tents at Bažant Pohoda, the most highly attended multicultural open air festival in Slovakia. While Pohoda is known for its numerous live music events, it has become a popular venue for discussions of issues crucial to Slovak society taking place from July 5 to 8. 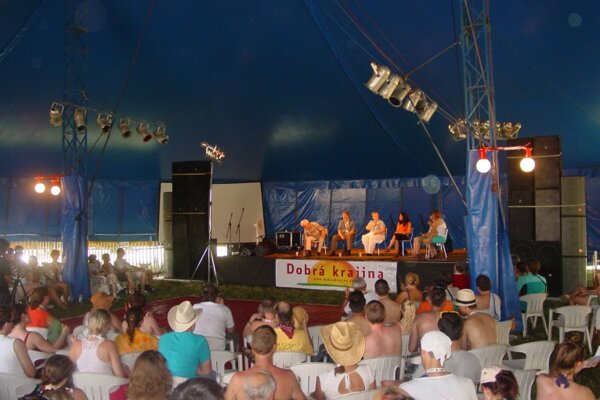 Instead of music, discussions about media ethics, the Slovak judicial system and the Roma question will resonate in one of the tents at Bažant Pohoda, the most highly attended multicultural open air festival in Slovakia. While Pohoda is known for its numerous live music events, it has become a popular venue for discussions of issues crucial to Slovak society taking place from July 5 to 8.

Most of the panel-led discussions are held in Dobrá Krajina (Good Country), the internet portal of Pontis - the foundation supporting the various non-profit organisations involved - and the Týždeň weekly tent, according to the Pohoda website. Even though the discussions are not considered to be a major draw at the festival, many Pohoda visitors and discussion panellists note that interest in them has grown with each passing year.

“I have many friends who say that even if someone is not a music fan, he would still have an incredible experience through either the theatre and film events or those discussions, without seeing a single concert,” said Zuzana Wienk, the executive director of Fair-Play Alliance, an NGO that monitors political party finances and transparency.

Fair-Play Alliance participated in two discussions at Pohoda on July 6 and 7, the first of which recognised the recipients of the Biele Vrany [White Crows] award for brave civic acts, given by Fair-play Alliance and Via Iuris, a labour organisation focused on law security. Each year the award is given to people who have displayed civic brevity, for example, have reported on corruption, sometimes while under threat of persecution.

The Biele Vrany recipients were current ombudsman Jana Dubovcová, former employee at Faculty of Law at Comenius University Zuzana Melicherčíková and Jozef Hašto, the psychologist of Hungarian-Slovak hate crime victim Hedviga Malinová, all of whom discussed their cases and responded to questions from the audience.

The impact of the discussion was evident at the end of the event when an audience member asked all three of the award recipients how he as an ordinary citizen could help them. Hašto responded, “Thank god for this question...you have already helped me,” with your concern and emotional support.

The second discussion, led by former Police President Jaroslav Spišiak and investigative journalist Tom Nicholson, focused on Gorilla, an issue that dominated the headlines during the few weeks leading up to the parliamentary elections on March 10. Nicholson wrote a book about the controversial Gorilla file, a document indicating widespread corruption in the government during the second term of Mikuláš Dzurinda’s governing coalition from 2002 to 2006.

Spišiak also took a part in a discussion with Štefan Hríb, the chief editor of Týždeň weekly, on July 6, which overshadowed other similar events that day in attendance. After the tent exceeded its maximum capacity, security was forced to close off the entrance and turn away the crowd. The discussion focused on various themes relating to Slovak police and justice, after which Spišiak received a standing ovation, proving his popularity in Slovakia among a significant segment of younger generations.

“For me the discussions are usually more interesting than the concerts,” said Jakub Lipták, a 20 year old university student, adding that Spišiak is such an important Slovak personality that he chose him over the music.

Týždeň, which has its own tent at Pohoda, organises and schedules debates every evening of the festival except for the last. The publication succeeded in creating a comfortable environment for these discussions, and not only because of the shelter and free wine it provided its guests on rainy evenings. Immediately after the main programme reporters from Týždeň took the time to talk with attendees about various issues and concerns.

“I am a fan of [Týždeň] and I wanted to meet its reporters personally,” said Emília Nemcová, a 59 year old College teacher from Trenčín, explaining her reason for visiting Týždeň’s tent.

Yet the Týždeň and Fair-Play Alliance are not the only organisations supporting these discussions. According to Wienk the fact that more and more organisations like Pontis or Culture Centre Dunaj organise their debates at Pohoda is evidence of increasing interest in these issues among festival attendees.

“I think that it is really important that people are in direct contact with each other and share information about what is going on in Slovakia, which may motivate [them] to find solutions,” to these problems facing society, said Wienk.