FOR THE FIRST time since Slovakia became independent in 1993, members of the Roman Catholic Church have launched public protests against a Vatican decision. Perhaps neither the Vatican nor top representatives of the church in Slovakia had expected that the Pope’s decision to recall one of the country’s most popular bishops, Róbert Bezák, via a terse one-line statement, would evoke such an emotional reaction within Slovak society. Hundreds of people came to Bratislava’s Main Square on July 10 to express their support for Bezák as well as to attend a concert organised on behalf of the recalled archbishop. 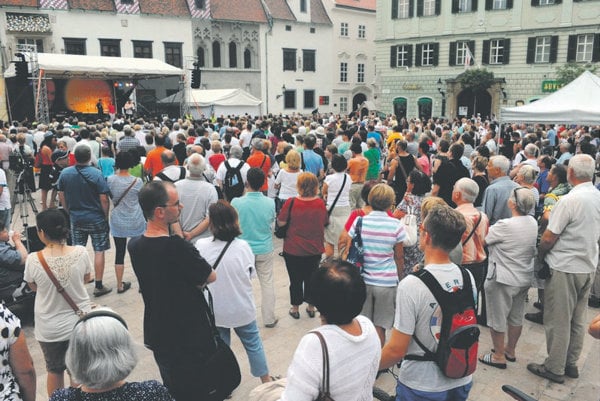 FOR THE FIRST time since Slovakia became independent in 1993, members of the Roman Catholic Church have launched public protests against a Vatican decision. Perhaps neither the Vatican nor top representatives of the church in Slovakia had expected that the Pope’s decision to recall one of the country’s most popular bishops, Róbert Bezák, via a terse one-line statement, would evoke such an emotional reaction within Slovak society. Hundreds of people came to Bratislava’s Main Square on July 10 to express their support for Bezák as well as to attend a concert organised on behalf of the recalled archbishop.

František Mikloško, a conservative politician and former member of the Christian Democratic Movement (KDH), was the first to disseminate information, on June 28, about the Vatican’s plan to recall Bezák. Bezák announced his dismissal to church members during a mass on July 1 by reading out parts of a letter from the Vatican in which he was told about the end of his official appointment as head of the Trnava archdiocese. He also told the congregation that he was ordered by the Vatican not to discuss the matter with the media.

Bezák was officially removed as archbishop at 12:00 noon on Monday, July 2 upon publication of an announcement in L’Osservatore Romano, the official daily newspaper of the Vatican. The Conference of Slovak Bishops (KBS) followed with a short statement:

“Based on an apostolic visitation which took place between January 22 and February 1, 2012, the Holy Father recalled Róbert Bezák from pastoral management of the Trnava Archdiocese. We accept the decision of the Holy Father in the spirit of faith and filial obedience and we are asking for blessings for the church in Slovakia.”

Social sites and the media in Slovakia since then have been in heated discussion over Bezák’s recall and many observers have stated one thing as certain: the recall could potentially harm the image of the Roman Catholic Church in Slovakia unless some acceptable explanation for its action is provided.

On July 9, the KBS announced that Bezák had violated the secrecy requested by the Pope when he had announced his recall during the July 1 mass.

“The Holy See expresses deep regret over the fact that Monsignor Bezák speeded up the release of this information and thus violated papal secrecy,” the office wrote, adding that after the January visitation to the Trnava archdiocese Bezák had been briefed about the most important points pertaining to him and his pastoral activities. The office claimed that Bezák was requested to make a statement regarding these points at that time.

Archbishop Bezák responded to the July 9 statement with a letter addressed to the Congregation of Bishops in the Vatican, even though the Office of the Apostolic Nuncio in Slovakia – effectively, the Pope’s ambassador – said that there had been a possibility for him to meet with the prefect of the congregation before the Pope made his final decision, the SITA newswire reported.

“The meeting did not take place,” reads the statement from the Office of the Apostolic Nuncio. “When Monsignor Bezák refused to resign, the Holy Father recalled him from the pastoral management of the archdiocese and this decision was published on July 2, 2012.”

On July 9 Bezák refused to comment further so as not to violate the rules of the Office of the Apostolic Nuncio. However, he had earlier said that he did not know why he had been dismissed.

On July 1 Bezák said that although all the letters he received from the Vatican refer to “serious accusations”, there were none actually specified. He also stated that he believed that one reason for his removal may have been his criticism of his predecessor, Archbishop Ján Sokol, the Sme daily wrote.

The Vatican stated that Bezák’s recall was fuelled by numerous complaints from church members. Nevertheless, about 300 church members gathered in Trnava’s St Nicholas’ Square to express their opposition to Bezák’s dismissal on the day it was announced, Sme reported, with the protesters decorating photographs of their former archbishop with flowers.

Bezák, aged 52, replaced Sokol three years ago. Many in Slovakia welcomed the change because of Sokol’s repeated praise for Jozef Tiso, a Catholic priest who was president of the Nazi-allied Slovak wartime state during which tens of thousands of Slovak Jews were deported to Nazi death camps, among other atrocities. Bezák had stated that Tiso should have resigned as president as soon as the first train transporting Jews left Slovakia.

On July 10, the bishops of the Roman Catholic Church in Slovakia called on members of the church to accept the Pope’s decision with respect and confidence, adding that some church members had responded to Bezák’s recall based on what they called “distorted and partial information published by some mass communication media”, SITA reported.

The KBS stated that the Vatican would not communicate the reasons for Bezák’s recall to “protect persons involved in the investigation and to respect the pastor of the diocese” adding that this did not mean that the reasons were unknown to the former archbishop.

Sme also wrote that people close to Bezák believe that his recall is related to certain actions he had taken regarding Sokol. The KBS rejected this argument, responding that the visitation to the archdiocese was conducted with all seriousness, correctness and sense of responsibility and was entirely for the good of the church.

Shortly after his appointment three years ago Bezák had issued a warning about some financial shortcomings he had found within the archbishop’s office.

The General Prosecutor’s Office has started an investigation of the financial management of the Trnava archdiocese during Sokol’s 20-year tenure as archbishop after a church auditor at the archdiocese filed a criminal complaint on July 4, Sme reported, adding that the internal audit had been initiated by Bezák.

The auditor, who asked not to be named, said she could not reveal details, the daily reported, adding that she was required by law to file a criminal complaint since she had uncovered facts that suggested a crime had been committed. The KBS refused to comment on whether there was such an audit or the activities of the General Prosecutor’s Office.

KBS spokesman Jozef Kováčik stated only that the new head of the archdiocese, Ján Orosch, who reports directly to the Vatican, will deal with the situation.