JAPAN and Slovakia established official economic relations immediately after the separation of the Czech and Slovak Republics in 1993 and, in spite of the recent global financial and European debt crises, there is a lot of space to develop them further. The recent visit by Slovak President Ivan Gašparovič to Japan, as well as the prospects for the signing of a Free Trade Agreement (FTA) and Economic Partnership Agreement (EPA) between Japan and the European Union, is expected to foster stronger economic relations between Japan and Slovakia. 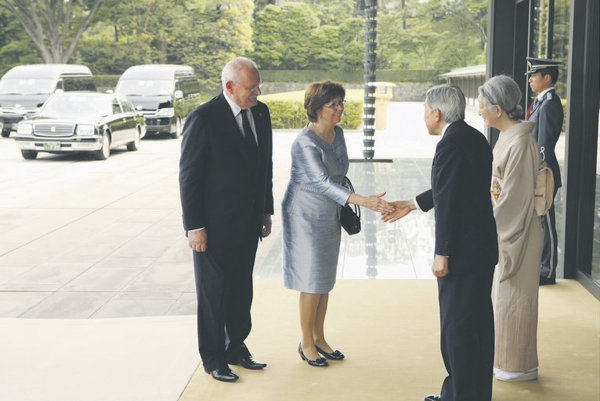 JAPAN and Slovakia established official economic relations immediately after the separation of the Czech and Slovak Republics in 1993 and, in spite of the recent global financial and European debt crises, there is a lot of space to develop them further. The recent visit by Slovak President Ivan Gašparovič to Japan, as well as the prospects for the signing of a Free Trade Agreement (FTA) and Economic Partnership Agreement (EPA) between Japan and the European Union, is expected to foster stronger economic relations between Japan and Slovakia.

The objective of the EPA, over which discussions about the start of negotiations are currently being held, is to liberalise economic and trade relations between the EU and Japan. In relation to Slovakia, this agreement could accelerate investments by Japanese entrepreneurs and intensify mutual trade.

President Gašparovič visited Japan between June 25 and July 1, and during his trip met Japanese Prime Minister Yoshihiko Noda as well as representatives of the Japan Business Federation, or Keidanren. Economic cooperation was the main topic of all the talks, Peter Bohov, the head of the Slovak-Japanese Chamber of Commerce (SJOK), told The Slovak Spectator.

“The most-discussed topic was the FTA and EPA between Japan and the EU,” Bohov told The Slovak Spectator, adding that, in Gašparovič’s words, Slovakia supports the start of negotiations on these two agreements, which should benefit both sides, as soon as possible.

Bohov believes that as Japan is one of the most important non-European trading partners of Slovakia the FTA and EPA would benefit both countries and that the SJOK as well as all Japanese companies established in Slovakia support them. It is expected that the agreements would enable Slovak companies easier entry into Japanese markets.

Slovakia has long recorded a negative trade balance with Japan. Based on data from the Slovak Economy Ministry, last year the trade balance stood at €735.9 million in Japan’s favour.

Economic cooperation between the two countries has intensified since 2004, when Slovakia became an EU member, especially based on its strategic position for entry into the common market, but also the markets of Ukraine and Russia, Katarína Špitová from the ministry’s foreign trade department told The Slovak Spectator.

The most significant Slovak exports to Japan are motor vehicles and their components (67 percent), followed by machinery, electrical devices, organic chemistry products, furniture and other goods. Motor vehicles also dominate Japanese exports to Slovakia, accounting for 36 percent of the total. Other goods imported from Japan include electrical appliances, machinery, tools and paint.
Based on information from the Japanese Embassy, Slovakia also exports wine to Japan. While the amount of wine exported is not big, Slovak wine is popular in Japan, it notes.

There are about 46 Japanese companies active in Slovakia, of which 19 are engaged in manufacturing, according to data supplied by the Japanese embassy in Bratislava. The rest are active in trade and services.

According to Bohov, most of the Japanese manufacturing companies in Slovakia act as subcontractors to the electro-technical manufacturing industry. This segment has declined over the last two years not only because of the recession in Europe but also due to the gradual saturation of the market with LCD televisions. However, the new generation of televisions should gradually reverse this trend.

Of the other Japanese companies active in Slovakia, Bohov mentioned Brother Industries (Slovakia), which recycles used toner cartridges, Fuso Industries, which manufactures components for air conditioners, and Misuzu Slovakia, which manufactures components for solar panels.
Preliminary statistics from the National Bank of Slovakia, the country’s central bank, puts the total direct investment from Japanese firms in Slovakia at €119 million at the end of 2011.
Between 2002 and 2011 the Slovak Investment and Trade Development Agency (SARIO) helped 10 Japanese companies become established in Slovakia. These investment projects, valued at €229.1 million, created almost 3,000 jobs.

Currently SARIO is working on six investment projects, mostly in the automotive and electro-technical sectors. Total investment from them is projected to be about €35 million and is forecast to create about 1,000 jobs.

According to Bohov, no large-scale Japanese investment has come to Slovakia over the last two years, but smaller companies like J-ETEC.EU and Tamura Architects have launched operations here. They opted for Slovakia thanks to its position as a base for future development of commercial activities in the wider central and eastern European region.

On the other hand, SARIO says it has recorded growing interest in Slovakia from Japanese companies over the last year.

“SARIO is in contact with several companies which have not been active in central and eastern Europe but are pondering investments in this region especially because of the presence of their clients in Slovakia or in the neighbouring area,” Ľubomíra Gabrielová, the head of SARIO’s marketing department, told The Slovak Spectator. “Compared with the past the projects are smaller in terms of volume.”

She added that investors think more conservatively and launch projects that are more modest, with the prospect of expansion in the event of success. But this is a global trend, Gabrielová added.

Japanese investors list among the advantages of investing in Slovakia the location of the country in the centre of Europe, its membership in the EU and the eurozone, as well as its highly educated labour force, coupled with the comparatively low wage levels.

The Japanese embassy says it would welcome more promotion since Slovakia is less known to potential Japanese investors compared with neighbouring countries.

SARIO also signed a memorandum of understanding with its Japanese counterpart organisation JETRO during President Gašparovič’s visit. SARIO expects that putting the good relations forged up till now into a formal framework will bring even more intensive cooperation and strengthen contacts.

During the visit, SARIO presented Slovakia as an investment destination at two seminars, in Tokyo and Osaka. Gabrielová listed the widening of existing contacts and the fostering of existing relations as the main benefits of the seminars.

According to Bohov, the seminars were attended by large companies. These showed an interest in further information about Slovakia and investment opportunities in the country. But Bohov agreed that more promotion of Slovakia is required and called for a continual supply of information to Japanese firms.

Turning to the barriers that Japanese investors face in Slovakia, Bohov cited what he described as the insufficient assistance given to small and medium-sized companies interested in investing in the country. Since such companies do not qualify for state assistance they also do not get help from state institutions. He explained that these companies are not primarily interested in getting state assistance, but do want the initial help and advice which is currently provided only to large companies considering bigger investments. In this respect, Bohov stressed that the Japanese economy is comprised, to a great extent, of small and medium-sized companies and not huge corporations.