ATTEMPTS to return to Slovakia Karol Mello, who is accused of several serious crimes including a double murder committed near Bratislava in 2004, are proving complicated, despite the fugitive’s arrest in Belize on July 11. 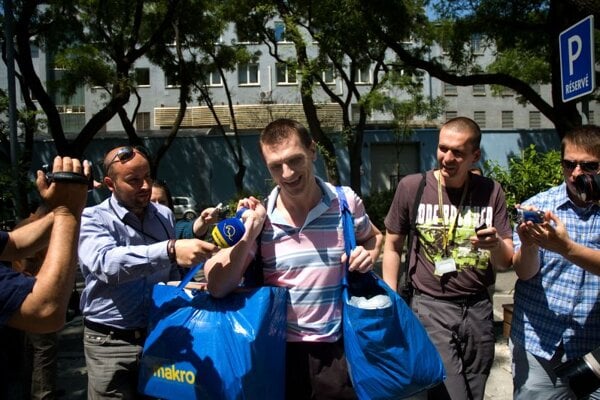 Karol Mello was released from custody by the Slovak courts in 2011 and immediately went on the run again. (Source: Sme)
Font size:A-|A+0

ATTEMPTS to return to Slovakia Karol Mello, who is accused of several serious crimes including a double murder committed near Bratislava in 2004, are proving complicated, despite the fugitive’s arrest in Belize on July 11.

In a ruling on Tuesday, July 17, a court in Belize halted Mello’s extradition to Slovakia, local TV channel Belize News5 reported on its website, quoting Godfrey Smith, Mello’s lawyer. Mello himself remains in detention in the capital, Belmopan.

However, on July 18 another website, 7newsbelize.com, reported that an expulsion order had already been issued and served on Mello. The website reported that the order was issued on July 16 and that it was not clear why the government in Belize had not immediately acted on it.

Slovak Interior Minister Robert Kaliňák admitted that there is a possibility that Slovakia will not manage to get Mello, who has been on the run for years, back. But he added that “we do not want to allow this to happen and believe that it is only a matter of time”, SITA newswire reported on July 18.

Kaliňák said that Slovak bodies could not predict how their counterparts in Belize would proceed since they do not have a detailed knowledge of Belize’s legal system.

“However, we cannot say that Belize have been trying to procrastinate; on the contrary, they were very active,” Kaliňák said, as reported by SITA.

Kaliňák refused to comment on the reported court decision to halt Mello’s extradition, saying that the Slovak authorities have not been officially informed by Belize of any such decision.

“We will consider this action successful only when the person suspected of committing several crimes is back in Slovakia; until then this operation is unfinished,” Kaliňák, said as quoted by SITA.

Mello, 42, was arrested on the Caribbean island of San Pedro during an operation codenamed Infrared that was organised by Interpol and Slovak police. He has reportedly been in Belize for several months. Mello spent several years evading arrest after he was accused of being behind a double murder near Bratislava in 2004, but was apprehended in Poland in 2010 and extradited to Slovakia. However, he was then released from custody by the Slovak courts in 2011 and immediately went on the run again.

Smith, Mello’s lawyer in Belize, claims that his client was detained illegally, and said Belize has yet to formally charge him with any crime. According to Belize News5, Mello has been granted permanent residence in Belize and lives there with his wife and two children. According to Smith, Mello has not been officially informed of why he is being detained or why Slovakia has asked for his extradition.

Kaliňák said he does not intend to travel to Belize or become personally involved in the extradition process.