PRIME Minister Robert Fico described the first 100 days of his current government as having been the most difficult of his whole political career, as well as those of his colleagues. However, he stated that his government has created a “very stable structure of ruling and governmental power”. Fico contrasted this with what he called the lack of stability of the previous government. 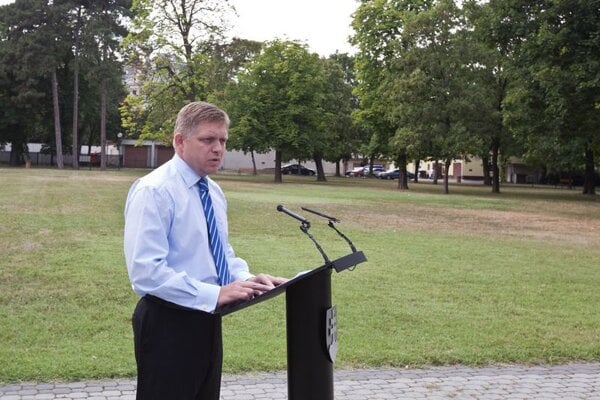 PRIME Minister Robert Fico described the first 100 days of his current government as having been the most difficult of his whole political career, as well as those of his colleagues. However, he stated that his government has created a “very stable structure of ruling and governmental power”. Fico contrasted this with what he called the lack of stability of the previous government.

The most significant moment after the election came when “we figured out that we are alone”, said Fico, referring to the fact that no opposition party was willing to co-rule with his Smer party after its landslide victory in the March 10 general election left it with the first single-party parliamentary majority since the fall of the communist regime in 1989.

Fico, speaking at a press conference on July 12 to mark his first 100 days in power, said that the country was not in the best condition when he took it over from his predecessor, adding that the previous government lacked stability and thus was not in a position to take important decisions.

“Over the past 20 months we had a very unstable, wide right-wing government in Slovakia,” Fico said, adding that his government had finally created a stable political power.

Fico said that his government had managed to create an effective mechanism for what he called “social dialogue” through the Council of Solidarity and Development, a body which consists of representatives of the government’s social partners and other civic organisations. Earlier this year, political analyst Ján Baránek commented for The Slovak Spectator that using the social dialogue approach means that development of the programme’s specific policies, and their success or failure, also becomes the responsibility of the government’s social partners, something he called “a very clever strategy”.

Fico also reported on July 12 that his government had managed to adopt measures crucial for addressing the budget deficit this year and next, one of the toughest challenges that the government faces – and perhaps will face – for the rest of its four-year rule.

“We all agree that healing the public finances is important and every government should undergo this,” Fico said, as quoted by the SITA newswire. “We are healing [them] in such a way that we protect people with low incomes. The basic principle is solidarity of the stronger with the weaker.”

Fico claimed that the austerity measures proposed by his government will negatively affect only 12 percent of all Slovak citizens.

Fico also said that his government had managed to regain its position as a trustworthy partner in international relations, especially in its ties with the European Union, in which, he said, the previous government had failed, the Sme daily reported.

The prime minister added that he now wants to focus on developments within the European Union and the eurozone since he considers this “the most significant task. Here we have to apply all our potential because significant decisions will be made, where many details might threaten us and also there are various catastrophic scenarios”. Fico stressed, according to Sme, that Slovakia has to be sufficiently informed and ready because the situation in the eurozone is extraordinarily serious and tense.

Yet, observers were quick to note that the Fico government has also used the first 100 days of its rule to embark on a massive reshuffle within the public administration, one which has again revealed the misery of the country’s system of political nominations.

The head of Transparency International Slovensko (TIS), Gabriel Šípoš, listed personnel reshuffles within state-run companies as being among the most negative steps taken by the government, SITA reported.

The TIS head specifically referred to the fate of Ľuboš Lopatka, who recently resigned as head of the state-owned social insurance provider, Sociálna Poisťovňa. Lopatka was the highest-ranking official appointed under the government of Iveta Radičová to survive the large-scale public administration reshuffle earlier this year, but he quit of his own accord after learning that he would be forced to reappoint as local Sociálna Poisťovňa branch chiefs the very same managers he had sacked less than two years ago.

The way the Fico government cut short the five-year term of the director of Slovak Radio and Television (RTVS), Miloslava Zemková, after less than 18 months in the job has evoked concerns within the media community.

However, Šípoš said he considers the anti-corruption promises included in the government programme as well as publicly declared issues in this area to be positive surprises of the performance of the government to date. Šípoš added, though, that only time will tell how promises pertaining to changes to procurement or financing of the political parties end up being fulfilled.

It is important to understand non-governmental organisations and journalists as being a regular part of society and to accept their position, Šípoš said, adding that this was one of the big problems of the first Fico government.

During this first 100 days in power, perhaps the most frequently repeated slogan of the government has been that the rich will have to demonstrate more ‘solidarity’ with the poor and carry a greater share of the massive burden of austerity measures. Yet, observers have been quick to note that the government’s interpretation of ‘solidarity with the poor’ might mean that it is not the corporate sector but the middle class that gets hit hardest.

Following the first 100 days of the new cabinet, people can be sure that their life will get worse, said Pavol Frešo, leader of the Slovak Democratic and Christian Union (SDKÚ). He added that it seems Smer supports only people who do not work and do not create value, and that their austerity measures will “burden the whole middle class”.

The leaders of the five centre-right parties which currently form the opposition agree that the changes already presented by Smer, especially to the tax and payroll-tax system, do not represent the “certainties for people”, which was one of the main mottos of Smer’s election campaign.

“They decided to punish people for success and will to work hard,” said Freedom and Solidarity (SaS) leader Richard Sulík, as quoted by SITA.

The fact that the government often modifies its proposals indicates that it does not have an integrated concept, representatives of Most-Híd commented.

Smer should keep its pre-election promises to take the missing money from the rich, and not to increase the payroll taxes of self-employed people, abolish work on temporary contracts and prevent poor pensioners from earning some additional money, said Igor Matovič, leader of Ordinary People and Independent Personalities (OĽaNO).

“This is not the way they promised or what they promised,” said Matovič, as quoted by SITA, adding that Smer had “deceived people”.

On the other hand, the leader of the Christian Democratic Movement (KDH), Ján Figeľ, said that the best measures proposed by the government were those that were different from Smer’s pre-election promises, such as funding construction of highways through money from EU structural funds, or revitalisation of the railways.

“Though it contradicts their promises, it is better for citizens,” Figeľ said, as quoted by SITA.