ONE hundred days after Robert Fico’s cabinet was appointed, most Slovak citizens still do not believe their society is heading in the right direction, even though the number of those who feel optimistic about the state of the country has risen while the number of pessimists has decreased, compared to the mood among Slovaks immediately after the March 2012 elections. 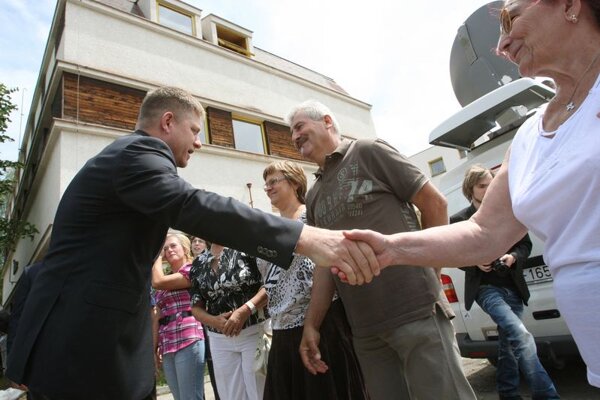 Thirty-six percent of respondents believed that Slovak society is heading the right direction while 57 percent were of the opposite opinion. (Source: SME)
Font size:A-|A+0

ONE hundred days after Robert Fico’s cabinet was appointed, most Slovak citizens still do not believe their society is heading in the right direction, even though the number of those who feel optimistic about the state of the country has risen while the number of pessimists has decreased, compared to the mood among Slovaks immediately after the March 2012 elections.

“The atmosphere after the 2012 elections contrasted with the prevailing optimism after the first government of Robert Fico was appointed in 2006, when the economy was strong, “[the] storage room was full”, the crisis [was] out of sight, and the government did not implement any unpopular measures,” analysts of the Institute for Public Affairs (IVO) wrote in the report on the quarterly IVO Barometer survey, published in mid-July 2012.

The IVO Barometer evaluates four areas of democracy: democratic institutions and a lawful state; legislation; respect for and protection of human and minority rights; and media freedom and the quality of public-service media. The area of civil society is evaluated as well, without receiving a grade.

The second Barometer in 2012 also includes the results of a survey called ‘Slovakia after the elections’, evaluating the overall direction Slovakia is taking. The results are based on a poll carried out by the Focus polling agency on June 5 – 11, 2012.

While 36 percent of those surveyed said they believed that Slovak society is heading the right direction, 57 percent were of the opposite opinion. Even though pessimists prevail among Slovak citizens, the situation has significantly improved compared to December 2011, when almost three quarters of all respondents believed that Slovakia was on the wrong path, the results of the research show.

At the same time, the current rate of post-election optimists is the lowest since the elections in 1998, when centre-right forces brought down the government of Vladimir Meciar. At that time, 47 percent of optimists outnumbered the 37 percent of Slovaks who were dissatisfied with the direction that society was taking. In 2006, when Robert Fico first came to power and replaced Mikulas Dzurinda as prime minister, 54 percent of Slovaks were happy about the country’s direction, compared to 36 percent who were pessimistic. In 2010, when Iveta Radicova became prime minister, the number of pessimists was higher, at 47 percent, while 40 percent of the people remained optimistic, IVO analysts wrote in their report.

The prevailing pessimism among Slovaks is also based on responses to questions regarding expectations for the government over the next one to two years.

“Compared to the year 2006, when Robert Fico took the prime ministerial chair for the first time, significantly fewer people expect the number of jobs to increase, for the healthcare system to improve, and an increase in the quality of life, as well as improvements to the state of democracy and strengthening justice in the society,” the IVO report reads.

Taxes in the spotlight

52 percent of those surveyed expect the situation around public finances and national debt to deteriorate; 49 percent anticipate healthcare to worsen; 47 percent believe the labour market will decline; while 44 percent think that political corruption and party cronyism will increase.

When asked to evaluate some concrete steps that the Fico-led government has already taken or has announced to take, nearly half of the respondents were not able to name any, while 12 percent said they have noticed no positive steps, compared to 3 percent who said they have seen no negative steps taken by the government. The plan to make changes to the tax system was mentioned as the worst step the government has taken by 16 percent of the respondents, while 10 percent approved of the government’s plan to increase taxes for wealthy individuals, companies and banks.

The report also indicates that the quality of democracy in Slovakia remained unchanged in the second quarter of 2012, compared to the previous quarter, and was given an overall grade of 2.8 on a scale where 1 is excellent.

There had been some negative tendencies, particularly in the areas of human rights and independent media, which, if not improved, will lead to a decline in the rating in the second half of the year, IVO analysts wrote in the report.

The human rights and minorities section of the report also commented on the recent shooting in Hurbanovo and the subsequent wave of strong reactions among the public presented in the media and particularly on the internet, contrasted with the lack of response to the incident by top state officials.

“[The survey results] have confirmed the previous findings from sociological surveys that warned of an alarming spread of ethnic tension among Slovak society,” the report reads. “It is therefore shocking that none of the top state representatives condemned these expressions of hatred immediately after the incident. It is in these moments of rising interracial tension that it is especially important for state representatives to send a clear signal that ethnically motivated violence and hatred has no place in Slovak society.”

“The position of the government proxy for national minorities is not an adequate substitute for the cancelled post of a cabinet member, neither with its content nor with the composition of its powers,” IVO president Grigorij Mesežnikov said as quoted by the SITA newswire.