Analyst: Government’s most beneficial move is to cut the public finance deficit

SMER now can afford to abandon its confrontational tone towards the opposition because it does not pose any substantial threat to its single-party government, suggests Grigorij Mesežnikov, president of the Institute for Public Affairs (IVO) think tank. The Slovak Spectator spoke to Mesežnikov about the Fico government’s first 100 days, the tradition of making a 100-day assessment, the performance of the opposition, and significant steps that the new government has taken so far. 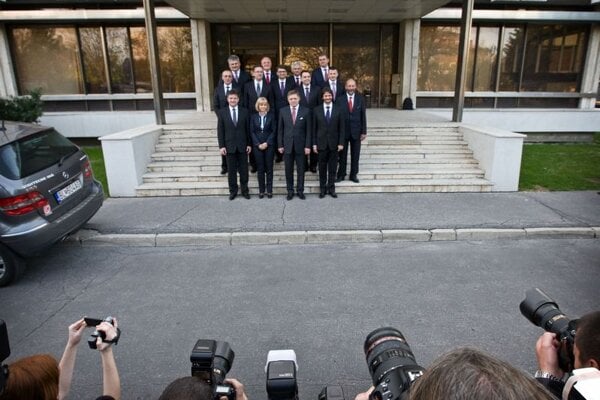 SMER now can afford to abandon its confrontational tone towards the opposition because it does not pose any substantial threat to its single-party government, suggests Grigorij Mesežnikov, president of the Institute for Public Affairs (IVO) think tank. The Slovak Spectator spoke to Mesežnikov about the Fico government’s first 100 days, the tradition of making a 100-day assessment, the performance of the opposition, and significant steps that the new government has taken so far.

The Slovak Spectator (TSS): How do you assess the first 100 days of the government of Robert Fico?
Grigorij Mesežnikov (GM): It was a period when the government was taking power and preparing the ground in order to be able to fulfil its programme. Perhaps there is some disappointment over how the government is proceeding in meeting its priorities because the situation is more complicated than perhaps the voters of Smer realise. If Smer wants on the one hand to fulfil its promises and on the other hand to keep the economy functional, then it must in some way manoeuvre around those challenges. What they have submitted in the area of taxes and payroll taxes so far has evoked disappointment. They say, for example, that the rich will be taxed and of course through this approach they find support with a significant section of their voters. On the other hand, what they propose will also affect the middle class, which will result in a not-very-favourable situation for society. Obviously, there is an effort to hike taxes, but it is weaker now, although the rhetoric at the beginning was quite strong.

It came across as a rather weird move when Robert Fico called on the opposition to submit proposals and [suggested] that he might pick some of these, since parliament is there for submitting and discussing such proposals and the majority of the opposition proposals there have been rejected. Then he criticised the opposition for not offering anything meaningful.

I do not think that the creation of these pseudo-cooperation structures have any significance. It is rather a tool for effective communication with different [audiences] from the point of view of Smer and the government. If we look, for example, at these meetings or the Council of Solidarity and Development it cannot be said that they have substantially influenced any legislation.

Over all, the state administration functions effectively and there is stability, so from this point of view we are witnessing some stabilisation when compared to the last days of the government of Iveta Radičova, which indeed had no real powers by that time.

TSS: How do you think the opposition has functioned during the first 100 days of the current government?
GM: The opposition is under pressure and [affected by] its own defeat in the election so that I think that for some time they will continue focusing on themselves. We have witnessed the Slovak Democratic and Christian Union [SDKÚ] change its leader, while the Christian Democratic Movement [KDH] is now in a very difficult situation because two people have left the party, one of whom had a key position. The opposition has not really shown anything so far. However, the expectations that in three months the opposition would be in a position to systematically oppose the government, moreover in the period of the summer holidays, might be unrealistic. I think that during the fall the situation will become much clearer.

Also, the current position of the opposition in parliament is a given and is very weak, and Smer rules without any problems, in addition to the opposition parties being torn by their internal problems. But I do not view the prospects of the opposition in very dark colours, because it still has voters. But the parties have to address their electorate with some meaningful issues. The opposition has that potential: it is now only weakened both professionally and personally because it has fewer representatives in parliament. Also, there has been a certain reconfiguration within the opposition itself, because, for example, Ordinary People [and Independent Personalities (OĽaNO)] is not a party, it is a grouping, so it does not work with the professional political methods like regular parties. Though the party comes up with proposals, these are rather non-systematic proposals presented in rather an ad hoc way with a certain orientation on the external effect, which after all is important for the opposition to be able to keep contact with its voters. But as far as effectiveness is concerned, or the submission of qualified proposals, there I see within these parties a certain decline when compared with the past. It is true that these parties functioned within the government, which gave them a somewhat stronger position.

TSS: In what areas has the government fulfilled expectations? What surprises have come out of its first 100 days?
GM: Proposals pertaining to the adoption of the European bailout were expected and the adoption of these measures was very quick, via a fast-tracked legislative procedure. So far, only four legislative measures have been adopted, meaning that only four laws have gone through the whole adoption process. However, a number of drafts have been moved to the second reading and of course there are also proposals that were expected. Though the tax-related legislation has not been through its first reading, some concrete points were announced, such as the cancellation of the flat tax. Thus the proposal being submitted is completely as expected. Yet, I evaluate the revision of the so-called competencies law negatively, since it abolishes the [post of] deputy prime minister for human rights, minorities and gender equality, although this move was expected as well. Certainly, next will come revisions to the Labour Code, the payroll-tax system, and changes to the second pension pillar.

If we look at the cooperation between the opposition and the government the result is a revision to the constitutional law on the abolition of deputies’ immunity from criminal prosecution. This move was expected since the parties had earlier indicated that they would support scrapping the immunity. Still, the ability to achieve such consensus, which 140 deputies voted for, should be evaluated positively.

TSS: How do you assess the appointment of László Nagy to the post of government proxy for human rights and minorities?
GM: The fact that they appointed a person who is competent and credible is a good thing, but there was a political dimension involved. Though he is an authority in the area of human rights his nomination was a result of political agreement between the ruling party and one of the opposition parties, which means that his appointment is subject to partisan politics, which is different from appointing someone without party affiliation. Though Nagy has suspended his [party] membership, his appointment was still the result of an agreement between Smer and Most-Hid, which makes it a non-standard decision. Smer should have appointed its own member, so it is clear that they are taking over responsibility and thus all the blame and praise would go to that party, because the appointment of Nagy creates a kind of informal coalition. Again, the cancellation of the post of deputy prime minister for human rights and minorities was unfortunate.

TSS: Which decisions or moves by the government do you evaluate as being beneficial to society?
GM: Perhaps the most beneficial will be if the government manages to push the public finance deficit under three percent. This would benefit society the most. Of course I consider it to be beneficial to trim public spending in the areas where such cuts are necessary and I understand that some of the tabled proposals include such cuts. As for negatives, I would perhaps mention the judiciary, where so far the effort to improve the situation has not been that evident. But we will see, I do not want to rush to hasty conclusions, because three months is quite a short period.

TSS: How do you view the tradition of evaluating the government’s first 100 days?
GM: It is only a sort of custom and I do not attribute much importance to it. I think that the government can be assessed right from its very first day. But here we are used to saying ‘let’s give the government 100 days and then we will say what we like and what we dislike about its operation’. But the government is legitimate from the very first day – for example, personnel nominations can be evaluated – so there is no need to wait 100 days.

I think that the 100-day period was adopted based on international experience: there are certainly some international examples from established democracies where the opposition gives the government time, as a kind of truce.