MORE than a year has passed since nurses protested, wearing black T-shirts, in front of parliament in support of higher salaries. Now they are planning to return to the streets: on July 24 they will express their disagreement with a recent Constitutional Court decision which suspended the validity of a law that was supposed to raise the salaries of nurses and midwives to at least €640 per month. Nurses’ representatives are even considering mass resignation if their street protests are ignored. 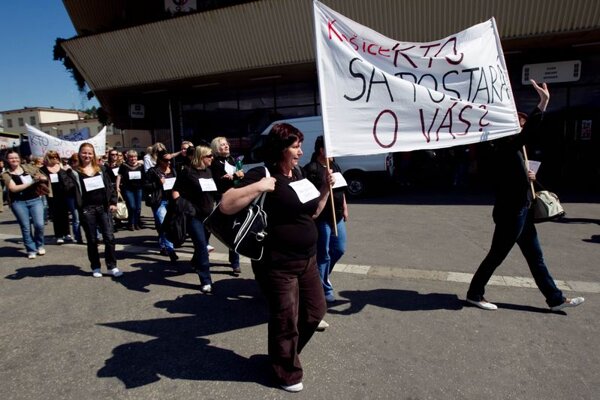 MORE than a year has passed since nurses protested, wearing black T-shirts, in front of parliament in support of higher salaries. Now they are planning to return to the streets: on July 24 they will express their disagreement with a recent Constitutional Court decision which suspended the validity of a law that was supposed to raise the salaries of nurses and midwives to at least €640 per month. Nurses’ representatives are even considering mass resignation if their street protests are ignored.

“The chamber, in its effort to force the authorities to do [something], has used up all lawful possibilities,” Mária Lévyová, the president of the Slovak Chamber of Nurses and Midwives, told The Slovak Spectator. “We are again back where we were at the beginning [in May 2011].”

The Constitutional Court issued its preliminary injunction based on a motion disputing the constitutionality of the law that was filed by the General Prosecutor’s Office, which was itself acting on a request from the Slovak Medical Chamber (SLK) and the Slovak Chamber of Health-Care Employees, two non-governmental professional organisations. The General Prosecutor’s Office argued that the law was what it called unsystematic since the wage hikes covered only selected health-care personnel, and funds to pay the wage increase were lacking, SITA newswire reported.

Nurses will not use same weapons against doctors

Paradoxically, hospital doctors, some of whom who are represented by the SLK, recently secured a salary increase via a law change similar to the one applying to nurses. The hospital doctors’ pay rise, which was agreed by the government following weeks of industrial action late last year, came as the result of an amendment to the law which became effective on January 1. However, that amendment has not been challenged by the General Prosecutor’s Office and nurses will not file a complaint t bring this about as to do so would be morally and ethically problematic, said Lévyová, as quoted by the Sme daily.

“By a filing a complaint we would just achieve the easier repeal of both laws,” said Lévyová. “We were expecting that the new president of the SLK [Marian Kollár] would cancel this suggestion [i.e. the SLK’s complaint about the nurses’ law] to the General Prosecutor’s Office.”

Lévyová told The Slovak Spectator that nurses regard the SLK’s approach to the prosecutor as a demonstration of professional selfishness and ‘social ruthlessness’ on the part of doctors, one she said the General Prosecutor’s Office and Constitutional Court seemed happy to oblige.

Kollár, who led last year’s protest by hospital doctors, claims that the SLK cannot withdraw its earlier complaint about the nurse applying to nurses since only the SLK Council is allowed to do so. He told The Slovak Spectator that this whole situation was caused by long-term problems in health-sector funding and that politicians should take responsibility.

If the nurses do not succeed with their protest in front of parliament they are planning a rally at the Constitutional Court, asking it to decide the whole case just as fast as it suspended the act, according to SITA. Yet the organisers seem to have little faith in the likely effectiveness of such protests.

“I would like to believe that our protest and my speech at the parliamentary committee for health care will be enough, but I am afraid that they will not,” Viliam Záborský, the head of the Labour Association of Nurses and Midwives, told the Slovak Spectator. He added that if necessary the protest organisers “will escalate action to exert pressure”.

Záborský said that his association considers mass resignations by nurses, mimicking the approach taken by doctors in 2011, to be a final resort, but warned that he was prepared to advocate such an approach, Sme reported.

The nurses’ chamber has already sent an appeal for support to partner international organisations like the International Council of Nurses, the European Midwives Association and the European Federation of Nurses Associations, Lévyová told the Slovak Spectator. She added that the chamber is also considering bringing a case in the international courts, but will first wait for the Constitutional Court to rule.

The suspension of the law should not cause nurses’ wages to fall, according to Marián Petko, the President of the Slovak Hospitals Association, a non-governmental organisation uniting more than 50 health-care facilities. He told The Slovak Spectator that he expects most hospitals to use their share of the €50 million from state reserves recently allocated by the government to the health-care sector to raise workers’ salaries. Wage levels should therefore be higher than they were before the law on nurses’ salaries was adopted, yet lower than they should be according to that law, he said.

Even though Petko said that he would support the distribution of the extra state money in favour of nurses, Lévyová said she considers his words to be a false promise. She predicted that the health-care providers would use the money not to raise nurses’ salaries but to cover their other expenditures, Sme reported.

“I reject what she [Lévyová] indicates: that now the Constitutional Court has decided as it has done, the hospitals will return nurses to their former salaries from before April 2012,” Petko told The Slovak Spectator, adding his association would not support protests, or the law on higher salaries.

By contrast, the Medical Trade Unions Association (LOZ), another union representing hospital doctors, has taken precisely the opposite view. There is a lack of nurses and the law on their salaries is inevitable, according to Peter Visolajský, LOZ’ chairman, as quoted by SITA. He pointed out that the approach to the General Prosecutor’s Office came from Milan Dragula, who at the time was president of the SLK but is now Prime Minister Robert Fico’s adviser on the health-care sector.

“That is why we think that it is also up to Fico, who should participate actively in this situation and as a left-wing politician secure a fair wage for nurses,” said Visolajský, as quoted by SITA, adding that the law on nurses’ wages was accepted with the strong support of Fico’s Smer party.

Parliament unanimously passed the law to increase nurses’ pay in February after two years of efforts by their professional organisations, including peaceful protests, negotiations with then-health minister Ivan Uhliarik and a petition signed by around 243,000 people. The minimum wage was set at between €640 and €926, depending on each nurse’s experience and specialisation. However, around the April 1 deadline for increasing wages some hospitals started changing nurses’ contracts to alter their official positions in order to avoid paying them more, ostensibly due to a lack of funds, Sme reported.