EXTREMELY hot weather followed by rain has reduced the predicted harvest and may increase food prices in Slovakia. Even though summer fruit, vegetable and other crops are still being collected, farmers estimate that this year’s harvests will be far below average. Lower crops tend to push food prices higher and farmers are concerned that the weaker harvest will boost livestock feed prices and thus increase food prices over the longer term. They may also suffer from a shortage of seed for planting next year. 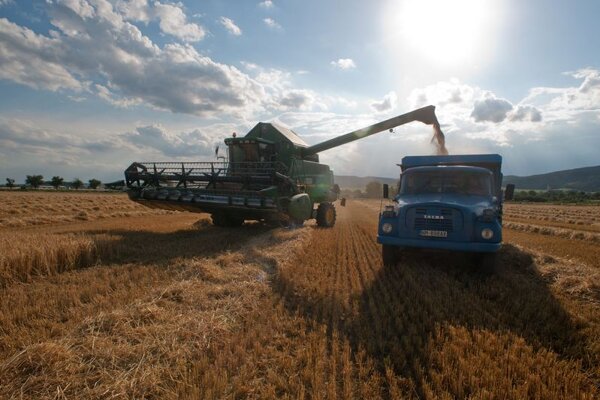 EXTREMELY hot weather followed by rain has reduced the predicted harvest and may increase food prices in Slovakia. Even though summer fruit, vegetable and other crops are still being collected, farmers estimate that this year’s harvests will be far below average. Lower crops tend to push food prices higher and farmers are concerned that the weaker harvest will boost livestock feed prices and thus increase food prices over the longer term. They may also suffer from a shortage of seed for planting next year.

While farmers are worried about lower fruit and vegetables harvests, what concerns them most is the expected cereal harvest. The Slovak Agricultural and Food Chamber (SPPK) estimates that this year’s harvest of densely sown cereals, like wheat, rye or barley, will be 20-25 percent lower than last year.

“This is a too big a gap to speak about a normal harvest,” Milan Semančík, the SPPK chairman, said on July 17, as quoted by the SITA newswire.

While figures for this year’s harvest will continue to change as harvesting proceeds, it is already obvious that production will lag significantly compared to 2011, which SPPK regards as normal in terms of the Slovakia’s production potential.

Last year the average wheat harvest was 4.5 tons per hectare. In the case of barley and oil seeds it was 3.87 tons and 2.31 tons per hectare respectively. Semančík regards these results as average, adding that past harvests of these commodities have even been 10-20 percent higher.

In regions of south-western, southern and south-eastern Slovakia, where harvesting is over or are almost over, many companies have registered drops in cereal production of 30 to 50 – and in some cases even 60 – percent, the TASR newswire reported.

The chamber sees extreme weather, although it did not hit each region to the same extent, as being behind the weak harvest.

“The figures to date show that harvest results differ significantly not only between regions, but also between companies or even fields,” said Semančík.

SPPK estimates that cereals have been harvested from about 40 percent of the total sown area. It hopes that the weather will improve and enable smooth harvesting works in regions where farmers have just started collecting crops in from the fields. Intensive rain may mean lower quality and consequently lower income from sales.

During the first half of July Slovakia experienced record-breaking high temperatures. The biggest lack of water occurred in regions where the harvest is just finishing or is even already over.

“For these regions the rainy weather arrived too late,” SPPK spokesperson Stanislav Nemec told TASR, adding that the drop in production of cereals there has exceeded 30 percent in many places. “It is a pity that precipitation did not occur earlier. For cereals the most important months are April, May and June, i.e. months during which there was almost no rain. Thus [the crops] did not develop optimally.”

But he warned that too much rain during the harvest may cause additional problems. Farmers do not like collection of the harvest to be interrupted. This is not only because of the time factor, but also because the rain can cause higher dampness in the grains, which must be then be dried. This also increases storage requirements, which brings additional costs.

The Agrarian Chamber of Slovakia (AKS) confirmed the bad impact of the weather this year. AKS chairwoman Helena Patasiová told TASR that while the cereal harvest started in the Žitný Ostrov region, also known as ‘the granary of Slovakia’, one week earlier than normal, it will end two weeks late and will thus last until the end of July.

“This year’s harvest is difficult and demanding, and the crops are very weak,” Patasiová said.

According to her, recent rains have however helped the maize and sunflower crops.

“Without moisture maize does very poorly,” said Patasiová. “Late maize in particular revived… Let’s hope that the maize harvest will be better than that of winter crops and densely-sown cereals.”

The poor harvest is forcing Slovak farmers to adopt emergency regimes, and there is a danger of job reductions. Some companies are also experiencing difficulty producing enough feed for their livestock, and as a result are pondering liquidating or significantly reducing their herds.

Former SPPK chairman and head of the Devio Nové Sady farm in Nitra Region Ivan Oravec told TASR that between March 1 and July 1 his farm received only 60 millimetres of precipitation, or 15 millimetres per month; the ideal amount is more than 40 millimetres. In fact, Slovakia has been suffering from a drought since the end of last summer. The absence of rain significantly affected winter crops, especially oilseed, but also spring crops.

Oravec estimated in early July that unfavourable weather would cost Slovak farmers €1.5 million in sales. He used as an example oilseed, which some farmers had had to pull out in the spring and replace with a different crop. He sees irrigation systems as a solution, but points out they are costly. Moreover, existing systems are obsolete and often not complete, as they are popular targets for thieves.

Another problem Slovak farmers face is that they cannot include their increased costs into the prices of their products as these prices are not created in Slovakia any more, but via European bodies.

“The situation in the fields is so serious that it deserves a special session of the Slovak Cabinet,” Fico said, as quoted by Roľnícke Noviny, a weekly agricultural newspaper. He instructed Jahnátek to prepare draft measures to soften the impacts of the bad weather on farmers. The cabinet is expected to consider these in August.

Semančík expects that the lower harvest will push food prices up. But he warns that creation of prices is a complex process with a very high number of factors. In his opinion, prices will ultimately reflect final harvests in major producing countries, changes in the price of oil, the behaviour of retail chains, the cabinet’s policy, and other factors.

“Food prices in particular accelerated the surprisingly strong growth of prices during the first sixth months of this year,” Ľubomír Koršňák, an analyst with UniCredit Bank Slovakia, told Sme. This is the strongest-ever June increase in food prices, as June is usually the first month of the summer seasonal decrease in prices. Moreover, expectations are negative with respect to the weak harvest.