CONTEMPORARY dance might not be the most popular genre in Slovakia, but it certainly has potential. Festivals, workshops and events that include Slovaks with foreign experience (like those organised by Stanica Žilina-Záriečie in Žilina or the Štúdio Tanca theatre in Banská Bystrica) or foreign performers and choreographers, are helping to spread awareness among those who normally do not attend dance performances. 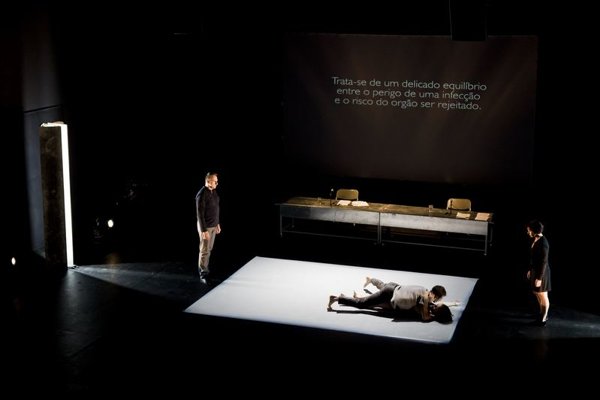 CONTEMPORARY dance might not be the most popular genre in Slovakia, but it certainly has potential. Festivals, workshops and events that include Slovaks with foreign experience (like those organised by Stanica Žilina-Záriečie in Žilina or the Štúdio Tanca theatre in Banská Bystrica) or foreign performers and choreographers, are helping to spread awareness among those who normally do not attend dance performances.

The Bratislava in Motion festival, the first part of which took place between June 16 and 24, brought to the Slovak capital three foreign innovators and trend-setters whose works had something in common: improvisation, body-work and – for two of them – the use of media other than just dance, for example sound, spoken word, computer animation, and live film.

The festival’s dance evening opened on June 16 with Talking Head, a performance by Austrian group Liquid Loft, headed by choreographer Chris Haring. “When Haring first came [to the Bratislava festival], he was a choreographer on the rise, and now he has become a well-established personality of Austrian contemporary dance. His piece, along with that of Rui Horta, makes a sort of framework for the whole festival,” festival director Miroslava Kovářová told the TASR newswire.

Haring’s piece is a techno-art satire, using words, sentences and information, with an increasingly threatening cadence. For non-English speakers, the core of the text was translated into Slovak, but as the choreographer admitted, the two actors improvised a lot, so it was impossible – but also not vital – to follow everything that was said. “The performance is a joint work of the whole team,” Haring told The Slovak Spectator, adding that it puts ideas together and the resulting form is a team effort where technique, lighting and sound also play a crucial role. Actress and founding member of Liquid Loft Stephanie Cumming admitted that sometimes the language barrier can be felt in the audience’s responses, but that it does not matter much, as the spoken texts are mostly nonsense – sometimes totally improvised – creating just a general image and background. Haring added that some parts are set, but some are meant to be improvised, and as the music by Andreas Berger is also improvised, from time to time the performers manage to surprise each other (and the choreographer and director as well). Talking Heads won the Golden Lion for “Best Performance” at the 2007 Biennale in Venice.

On June 22, the Hungarian troupe Hodworks, led by choreographer Adrienn Hód, danced to the live music of the 15th century Basse Dance. Basse Dance used to be a peaceful medieval court dance in Spain, but on the evening of the performance, it turned into a surprising, improvised work by four individuals in the first part, only to metamorphose into chilling duets – interspersed with solos – in the second part. “The music is improvised, too, performed live by Zoltán Mizsei, a professor of music,” Hód told The Slovak Spectator, adding that in the Middle Ages, music had to stick to certain forms, but could be improvised, almost like jazz. So Mizsei can move with his music within certain limits – as did the four dancers onstage. But within these limits – most of which were set by mutual interaction – they moved rather freely. This choreography was managed totally without words. Basse Dance premiered last September in Budapest, and in March 2012 it won the Rudolf Laban Award for the best dance performance in the country.

The third foreign guest, who closed the whole festival, was renowned Portuguese choreographer Rui Horta, who decide to show Talk Show, three stages of human lives and partnership relationships: the enthralled youth, completely in love and full of strength; the mid-life crisis reflected in frustration and resignation; and the ageing – physical as well as mental – which brings to life different qualities and different beauties. Part of this piece was nudity, but it was not an end in itself, rather a means to show different stages of life as equal (though not the same) and equally worthwhile. There was a young couple, a middle-aged couple, and in the end the young couple made a live-shooting of the older couple, while showing the symbols of ageing. The music by Tiago Cerqueira underlined the plot, which revolved around a heart transplant, the heart as a symbol of human feelings, and the connection between body, mind and/or soul. As the title suggests, Talk Show includes a lot of words, description of surgery, etc., and although the texts were translated and screened, they were not precisely synchronised. However, even those who missed out on some words or meanings could get the core message.

The foreign production had a Slovak connection, as the ‘young’ female dancer, Lívia Balážová, was Slovak. “Our troupe is truly international,” Horta revealed, adding that it also toured with the same piece in other countries, both in big cities and in smaller towns. Horta has received several prizes for his choreographies and also for his contribution to Portuguese contemporary dance.

Parts of the festival were also two Slovak productions: Voda na vode / Water on Water, a fragile and emotional meditation on the character of water and memories, choreographed by Šárka Ondrišová and performed by the Elledanse theatre and school; and Czech In, a compiled piece by two choreographers of Czech origin, Jiří Kylián and Libor Vaculík, performed by the Tanečný Súbor Nová Scéna dance theatre. Performers dancing in the streets of Bratislava (on June 9 and 16) were used to attract audiences to the festival; a screening of two short movies by Peter Bebjak, Voices and Darkroom, rounded off the summer part of the festival.

This year, the Bratislava in Movement is in two parts; the second part, mostly focused on dance workshops, discussions and practice, will take place between September 24 and 30, and include several dance performances, mostly by dance schools or joint dance projects. More information can be found at www.abp.sk.

The festival not only concentrates the progressive elements of the Slovak contemporary dance scene, but also attracts foreign productions which, rather than being meant for regular stagings in local theatres, represent rare occasions to witness imagination captured in bodily expression, be they at international festivals or special evenings at domestic theatres. Viewers who enjoy pieces stretching the limits of dance as well as the imagination, and who like wandering into other media and genres, can look forward to the autumn.