Levoča: Invited by the Lady in White

On a cold evening in 1715, amid the latest uprising against the Habsburg crown, a resident of Levoča named Júlia Korponayová is alleged to have committed an act of treason. As rebel troops swarmed outside the town’s mighty fortifications, Korponayová is said to have stolen the keys to the town gates and welcomed in the enemy army. Levoča capitulated without a battle and Júlia was subsequently branded a traitor, imprisoned and put to death. 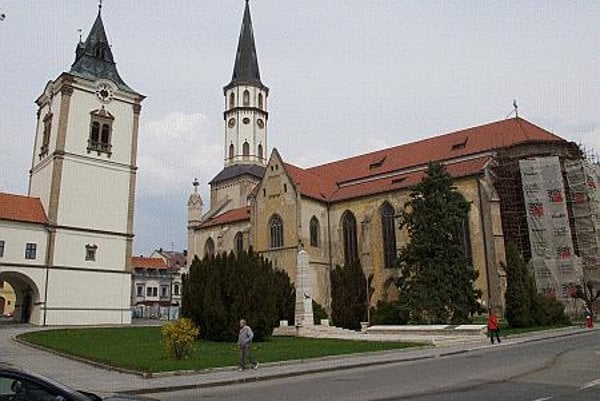 The Church of Saint James is the home of the tallest Gothic altar of its kind in the world. (Source: Tomáš Kelley)
Font size:A-|A+  Comments disabled

On a cold evening in 1715, amid the latest uprising against the Habsburg crown, a resident of Levoča named Júlia Korponayová is alleged to have committed an act of treason. As rebel troops swarmed outside the town’s mighty fortifications, Korponayová is said to have stolen the keys to the town gates and welcomed in the enemy army. Levoča capitulated without a battle and Júlia was subsequently branded a traitor, imprisoned and put to death.

That, at least, is how legend remembers it-recent research suggests the truth might be different. But the so - called White Lady is still remembered as an iconic figure in Levoča, where her warm welcome should be accepted by all visitors to Slovakia, regardless of royalist inclinations.

Levoča truly is one of the country’s historic jewels - a charming city that is included in its entirety on the UNESCO World Heritage List. Archaeological findings in the region suggest human activity here dates from the 9th century. However the first official reference in documents comes from 1249. About 40 years later, king Charles Robert conferred the right of storage onto the town, which became a major turning point in Levoča’s fortunes. Under the king’s orders, every travelling merchant had to visit the town for 14 days and provide their goods at lower prices. Meanwhile local merchants earned tax breaks. This strengthened Levoča’s economic powers over the region and the town grew to be the wealthiest in Spiš.

The city has multiplied its size since the days of the White Lady, but even today the original fortified walls remain around the old-town centre. The historic downtown is also amazingly pristine, with a picture-book quality, particularly the central Square of Master Pavol. It is a wide rectangular area, fringed by renovated burgher houses (including the Thurzo Mansion and Mariássy’s Manor House), with plenty of other sights in the middle. The manors were built mostly during Levoča’s era of greatest prosperity, the 14th and 15th centuries.

Although there are plentiful information boards located around the square, it is advisable to take an extensive tour of the town arranged by, and starting at, the tourist information centre. After a short orientation, the tour progresses to the Museum of Spiš Art, featuring an exhibition of fine art from local artists. Then it is on to Levoča´s main attraction: the Church of Saint James, which stands majestically beneath a huge tower in the centre of the square.

Visitors are expected to pay an entry fee to St James’, but it is immediately worth the cost. The centrepiece is a gothic altar made by the hometown hero, Master Pavol of Levoča, and is, at 18.6 m, the tallest of its kind in the world. Master Pavol is Levoča´s most famous celebrity, with an international reputation. He lived and worked in the town in the 15th and 16th centuries, and his former home currently houses a museum of his masterpieces on one side of the square that bears his name.

Next to the sacral jewel, St James’s, is a civic one: Levoča’s town hall, which was founded in the 15th century and enlarged in the first half of the 17th century. Throughout its history, it has been renovated and adapted in Gothic and Renaissance styles, and then in the 18th century its Baroque bell tower was attached. Despite the various influences, the town hall is a remarkably fluent building, far from the muddle you might fear.

Besides the town hall and St James’ Church, the third building in the centre of the square is comparably humble. This is the evangelical church, built in 1837, shaped like a Greek cross and built on the site of an older wooden church. Although it seems much smaller than its neighbours, it can still hold an impressive 1,500 people beneath its dome. It also holds a collection of more than 20,000 books, including many hand-written editions from the 16th and 17th centuries.

Levoča´s fortified walls guard almost all of its important sights, but there is one place worth visiting outside the inner core. When leaving via Košická Gate, take a left turn and make a 10-minute drive, or 40-minute hike, to the Calvary. Here the Stations of the Cross will remind you of Jesus´s sufferings and guide you up to the one of the oldest pilgrimage spot in Slovakia.

Annually, on the first Sunday after the national holiday of 5 July (Cyril and Methodius’ day) Mariánska hora (Marianska Hill) is the destination for more than 300,000 pilgrims. In 1995, this number swelled to 700,000 when the ceremony was taken by the recently beatified Pope John Paul II.
At all times of the year, the spot offers a wonderful panorama overlooking the town and wider countryside