Stará Ľubovňa: What a difference a loan can make

Once upon a time there was a king who needed money for his invasions. To solve his temporary money shortage he borrowed some cash from another emperor and gave his castle and some nearby towns as a pledge, hoping that his activities would fetch him enough money to settle the loan and get the deposited territory back. 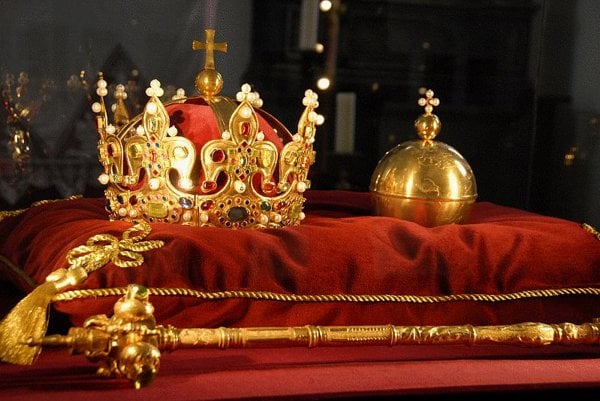 Replicas of the Polish crown jewels; the originals were hidden at Ľubovňa Castle between 1655 and 1661. (Source: Jana Liptáková)
Font size:A-|A+  Comments disabled

Once upon a time there was a king who needed money for his invasions. To solve his temporary money shortage he borrowed some cash from another emperor and gave his castle and some nearby towns as a pledge, hoping that his activities would fetch him enough money to settle the loan and get the deposited territory back.

Even though this may sound like the start of a fairytale, it is a piece of real history. It happened in Stará Ľubovňa , when the Hungarian sovereign Sigismond Luxembourg and the Polish king Vladislaus II clinched a loan treaty at the local castle in 1412. Sigismond gave the Stará Ľubovňa Castle, the town of the same name, and some other towns and villages of the Spiš region in exchange for 37,000 heaps of Czech groschen. Under this deed, according to a real historical document now in Krakow (Poland), all the land, castles and villages should have been held, owned and possessed by the time the king or his descendants repaid the loan. Sigismond, however, did not pay up and even though his descendants offered the money, Poland did not return the property (strategically located at the border of what was once the Hungary/Poland border) for 360 years. The castle and the towns were only returned under the reign of Maria Theresa in 1772.

Ironically, being held as pledge actually meant prosperity for the affected towns, at least at the beginning.

“The deed was far from a tragedy because they obtained privileges from Polish kings in addition to those obtained from Hungarian kings,” said Miroslav Števík, the historian at Stará Ľubovňa castle. “These towns, which also included Poprad, Podolínec, Spišské Podhradie and others as well as Stará Ľubovňa, were freed from payment of customs and profited a lot. It is clear when you compare the architecture of these towns with the 11 towns of the Spiš region that were not part of the deal.”

The nearby town of Podolínec serves as an excellent example. During the 17th century, Podolínec was the most important town in the vicinity of Stará Ľubovňa and the mayor, Stanislav Ľubomirský, established here the Piarists’ Collegium, which earned the town nicknames such as “Athens above Poprad” or the “Spiš Oxford”.

“This town is still held in high esteem by the Polish,” said Števík “A number of prominent Poles studied here.” Števík also added that the town has preserved the original layout of a medieval town until today.

“There are unbelievable things here,” he said. “For example, altars with unique decorations by guilds, which have been destroyed elsewhere, have been preserved here.”

A visitor can already see a well-preserved fortification wall encircling a very regular rectangular square, hemmed by burgher houses. The castle can only be viewed from outside (it houses the town’s municipal offices) but it is possible to visit the Gothic church, with precious wall paintings and a Renaissance bell tower next door.

The town monastery is still in use, but the monks will open monastery’s church to visitors prepared to ring the bell and ask them. Seeing interiors of the town’s other historical buildings can provide a more significant challenge.

History of the castle

Arguably the most spectacular construction in the region is the aforementioned Stará Ľubovňa Castle , which, according to the latest research, dates from the late 13th century. The last king of the Árpád family, Andrew III, began the construction, and it was gradually built, rebuilt and extended in the Gothic, Renaissance and Baroque styles before it was completed in the middle of the 17th century. Located in a buffer zone between what used to be Hungary and Poland it was heavily fortified and still boasts some exceptional fortification features.

“The most precious parts of the castle are the Gothic tower and the western Renaissance bastion built according to plans of Italian architects,” said Števík, adding that this bastion is one of the last remaining unaltered bastions of this type to be found in Europe. At the time of construction, it represented the pinnacle of fortification technology.

Actually Stará Ľubovňa Castle, which in 2011 celebrated the 700th anniversary of the first written mention, can provide enough of interest for a full day’s visit. It houses an exhibition about the history of the castle, whose importance was proved by seven royal visits. The Polish crown jewels were also held here between 1655-1661, and duplicates are now on display. Under the castle is an open-air museum of local folk architecture and a medieval military camp. In the town, visitors can admire another rectangular square with houses from the 17th and the 18th centuries. Apart from the St Nicolas Church the most precious house is the Renaissance arcadian house built by the high local official Juraj Gunter in the middle of the 17th century.

Stredoveký vojenský tábor (Medieval Army Camp)
www.marmon.sk
Tel: +421 (0)52 432-1713
Zámocká 125, Stará Ľubovňa; Open: May 1-15 Sat and Sun only 10:00-17:00, May 16-Sep daily 10:00-17:00; Price: € 2; The medieval camp below Stará Ľubovňa Castle offers a look into the life of medieval soldiers. After horse-riding, bow-shooting, and meeting the craftsmen and knights, visitors can get authentic medieval refreshments in a medieval inn and can even spend a night in a period army tent.

Ring the bell to visit the St Stanislav Church. Recent discovery of previously unknown early compositions by Vivaldy that had been sent to the monastery to be copied shows the importance of the Piarists’ Collegium that had been housed here.

The Church of the Assumption of Virgin Mary
This church dating back to the 13th century is a mixture of its original Gothic architecture that was later extended and now bears Renaissance and Baroque architecture as well. The church holds precious medieval wall paintings from between
1360 and 1430.