HUNDREDS of nurses wearing black T-shirts filled the streets in front of Slovakia’s parliament on July 24 to express their disagreement with a preliminary injunction issued by the Constitutional Court. The ruling suspended a law establishing a minimum monthly wage for nurses of at least €640 – or more, depending on their experience and specialisation. 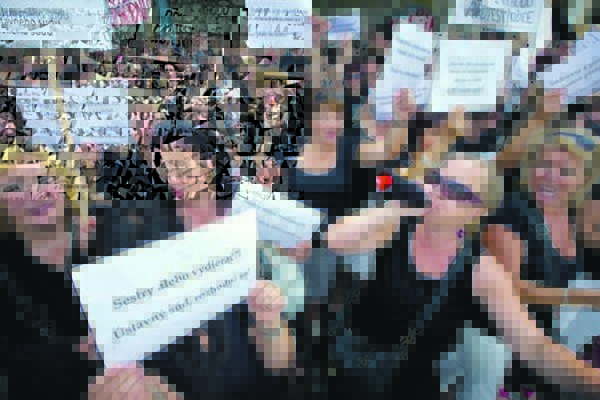 HUNDREDS of nurses wearing black T-shirts filled the streets in front of Slovakia’s parliament on July 24 to express their disagreement with a preliminary injunction issued by the Constitutional Court. The ruling suspended a law establishing a minimum monthly wage for nurses of at least €640 – or more, depending on their experience and specialisation.

Black T-shirts were also worn by nurses who could not attend the protest to symbolise their return to exactly the same point where they were last May, when they first succeeded in convincing parliament to increase nurses’ salaries, said Mária Lévyová, the president of the Slovak Chamber of Nurses and Midwives (SKSaPA).

“At that time we delivered to parliament a petition with nearly a quarter of a million signatures and we did not even realise how thorny the path in front of us would be,” Lévyová said in an interview with the Pravda daily.

Parliament unanimously passed the law to increase nurses’ minimum salaries in February. But at the beginning of March the then-president of the Slovak Medical Chamber (SLK), Milan Dragula, filed a complaint with the Office of the General Prosecutor in which he alleged the law was unconstitutional. The prosecutor later sent the complaint to the Constitutional Court, which subsequently passed a preliminary injunction suspending the law at a non-public session held on July 11.

Nearly 400 nurses, as well as representatives of other medical employees, came to Bratislava on July 24 to express their disagreement with the actions. They also presented their demand, which in addition to their original request for higher salaries for nurses and midwives, now includes a request that parliament pass a crisis plan if the Constitutional Court makes a final ruling in favour of SLK, to pass legislation preventing employers from forcing nurses to sign disadvantageous contracts, and to investigate the use of a €50-million reserve the government allocated to cover increased salaries for both nurses and doctors.

“The aim [of the protest] was to activate nurses to care about public affairs, to know [how] to fight for themselves, and also to show the public that we are here and we will not give up,” Viliam Záborský, the head of the Nurses and Midwives trade union, told The Slovak Spectator.

Lévyová said nurses want to point out that what happened to them might also happen to other employees in other sectors “whose performance is connected with the public interest”.

She said she appreciated the fact that in addition to the nurses and midwives, most of whom came after working night shifts or requested time off from work, doctors, teachers, civic activists, representatives of patient organisations, ordinary citizens, politicians and internet bloggers also came to the protest.

Moreover, the protest was supported by several national and international organisations and associations, including the Medical Trade Unions Association (LOZ), the New School Trade Union, Vision 21, and the European Federation of Nurses, Lévyová told The Slovak Spectator.

Záborský presented the reasons for organising the protest, as well as the basic requirements of nurses, midwives and other medical employees, during a meeting of the parliamentary health committee chaired by Smer MP Richard Raši.

“From this place we ask the parliament and the government of the Slovak Republic: do not passively wait for the ruling of the Constitutional Court,” he stated, adding that the entire health-care system and its patients need a contingency plan in case the court finds the law unconstitutional.

The contingency plan requested includes preparation of a law that will provide increased salaries for nurses regardless of the suspended law, Záborský explained.

“We want nothing but the guarantee that in the event of abolishing the law [on minimum wages] we will not return to the previous wage level before April 1, 2012, and we will have legally guaranteed salaries,” Záborský told The Slovak Spectator.

He added that the state should ensure that employers cannot freely change nurses’ employment agreements, as they reportedly did to avoid increasing their salaries.

Lévyová also met with Health Minister Zuzana Zvolenská, Speaker of Parliament Pavol Paška and Raši to discuss the current situation and its possible development if the court finds the law on minimum salaries unconstitutional.

During the meeting the public officials agreed to the request to allow representatives of the SKSaPA to advise parliament during the removal of constitutional flaws from the law, since at the moment they cannot directly join the negotiations, Lévyová told The Slovak Spectator.

The Health Ministry even promised the SKSaPA that it would continue steps to ensure higher salaries were paid to medical staff via a €50-million reserve allocated for this purpose. Minister Zvolenská called on employers to use the money to cover the increased wages of nurses and midwives, the TASR newswire reported.

The fight of nurses and midwives to raise their minimum wage has already gained support from several, mostly opposition political parties, including Most-Híd, the Ordinary People and Independent Personalities (OĽaNO) and the Christian Democratic Movement (KDH) deputies.

Viliam Novotný from the Slovak Democratic and Christian Union (SDKÚ) even wanted the parliamentary health committee to invite acting prosecutor general Ladislav Tichý and Constitutional Court President Ivetta Macejková to attend the meeting of the committee to explain their decision to suspend the law on minimum wages. Yet, the members of the committee did not accept his invitation, TASR wrote.

Lévyová appreciated the political support, saying that during the previous governmental tenure nearly all of parliament accepted their claims for higher salaries. Since they expressed their support already in June 2011, she does not consider it part of the political campaign.

The only action the representatives of nurses and midwives have planned for the immediate future is a protest in September in front of the Constitutional Court in Košice. The main reason is to accelerate a final ruling on the law, Lévyová said, adding that nurses and midwives cannot easily work amid such uncertainty.

“It is necessary for all responsible [authorities] to take into consideration that this is a job performed in public interest; that secure and quality health care cannot be provided effectively by demoted, disgusted and exhausted nurses and midwives,” she told The Slovak Spectator.

Lévyová added that it is not possible for nurses to work effectively when they are not offered motivation or social security even though their employers demand a high level of experience and nurses and midwives often have to work under great physical and mental pressure.

“From the point of view of the nurses, this situation seems to be stalemate, critical and hopeless,” she said.

The representatives of nurses and midwives will now wait to see whether they can persuade elected officials to resolve this chaotic situation, Záborský said, adding that if that does not happen, the nurses will continue their protests and toughen their stance.