THE SUMMER holidays this year are not idle months for the staff of Slovak universities as the Education Ministry is pursuing major changes in various aspects of the higher education system in Slovakia and an amendment to the country’s Act on Universities is now undergoing interdepartmental review. 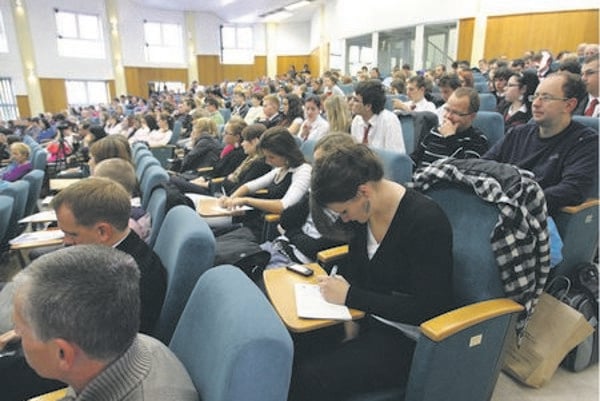 THE SUMMER holidays this year are not idle months for the staff of Slovak universities as the Education Ministry is pursuing major changes in various aspects of the higher education system in Slovakia and an amendment to the country’s Act on Universities is now undergoing interdepartmental review.

After completing his first 100 days in office, Education Minister Dušan Čaplovič is continuing to pursue the changes he announced at the start of his term: more support from the state for study programmes in technical and science-oriented schools. To increase the number of university graduates from these kinds of study programmes and to restrict the number of graduates from humanities, the amendment advanced by the minister would provide higher levels of funding for technical and scientific specialisations as of January 2013, particularly in fields in which there is thought to be a shortage of qualified graduates for the needs of the labour market. The amendment would apply only to public universities because the state does not provide any subsidies to private universities.

“The decisions will be made based on the needs of the labour market and prior to making a final decision we will solicit the position of representatives from universities,” Čaplovič stated, as quoted by the SITA newswire.

According to the minister, the Labour, Social Affairs and the Family Centre (ÚPSVaR) will undertake analyses to more precisely determine the needs of the labour market and the amendment will also make it easier for students with excellent grades in study programmes which are in demand in the labour market to receive scholarships.

“The state gives out money so it also has the right to direct it,” stated the head of the Council of Universities, Viktor Smieško, as quoted by SITA. “If it finds that there are too many students in humanities and feels the need to support natural and technical sciences, it can be done with targeted [state] subventions.”

Renáta Králiková, an analyst with the Slovak Governance Institute (SGI) who formerly worked as an adviser to former prime minister Iveta Radičová, told The Slovak Spectator that she believes it is correct to support demands coming from the labour market but added that the analyses prepared by ÚPSVaR must be closely monitored.

“If we don’t have good prognoses it would be unfortunate to use them to determine financing,” Králiková stated, adding that it is important that the state does not under-finance some specialisations in which fewer graduates are needed.

“In all specialisations we need good-quality graduates,” Králiková stated.
Králiková added that if the state does not want to finance certain specialised studies it should nevertheless allow students at public universities to self-finance their education, stating that some graduates from Slovak universities do not necessarily want or need to find a job in the Slovak labour market because they can choose to work elsewhere in the European Union due to its open labour market.

The amendment undergoing interdepartmental review also proposes that part-time students should be allowed more time to complete their degrees than students in full-time study programmes. Currently, both part-time and full-time studies are scheduled to take three years for a bachelor’s degree and two additional years for the master’s level but the Education Ministry is proposing that part-time students could prolong their bachelor’s studies to four years and their master studies to three years.

“These [part-time] students divide their time between their family, their work, and, quite naturally, their studies,” Čaplovič wrote on his blog on July 11. “They undeniably deserve such an approach and to receive the number of lectures and practical classes from university teachers that would go beyond only superficial knowledge and formal fulfilment of criteria.”

“In the past it was a normal practice that as long as a university had accreditation for a full-time study programme, the [corresponding] part-time programme accreditation was granted more or less automatically,” Králiková told The Slovak Spectator, arguing that this should no longer be so automatic.

She noted that part-time study programmes at Slovak universities need to be attractive enough to maintain students if the period is lengthened because part-time programmes are free of charge in the Czech Republic and are allotted the same period of time there as for full-time studies.

“People might rather go for such programmes in the Czech Republic or in some other country where they will be able to [get a degree] more cheaply and quicker,” Králiková said, adding that the state should also keep open the possibility that a student could complete his or her studies in a shorter period.

Clipping the wings of ‘flying professors’

The amendment presented by Čaplovič proposes to clip the wings of so-called ‘flying professors’, individuals who have full-time contracts with more than one university. It has been estimated by the media that dozens of teachers, primarily full professors, concurrently have employment contracts with three or even four universities. The SITA newswire wrote that Ján Cuper, a former MP from the Movement for a Democratic Slovakia (HZDS) party, has full-time contracts at three law schools in Bratislava, Sládkovičovo and Banská Bystrica.

The proposed amendment would permit teachers to have only one full-time contract as of January 2013, with a maximum limit of 58 hours of work per week.

“It is not about the ability to offer a good quality product but about wandering for money, without any quality offered,” Čaplovič stated on his blog about these professors.

Smieško of the Council of Universities told the SITA newswire that his organisation opposes the restriction, claiming that it is unconstitutional and could negatively affect the country.

“If someone is a forensic specialist and at the same time lectures at a university, the person would have to say midway through the year that he or she cannot do any more forensic reports because of the work time limit,” Smieško stated, as quoted by SITA.

The Council of Universities stated that it agrees with the principle behind the proposed restriction and has suggested an alternative approach: teachers would be permitted to have one full-time contract and their publications and other activities would count only for their ‘main’ university contract, but they would also be allowed to have “a number of little contracts”, Smieško told SITA.

The relatively calm waters of the Slovak university system during the past two years under the previous education minister, Eugen Jurzyca, have been roiled as well by a proposal made by the current Education Ministry to withdraw university accreditation from four schools as of September 2013.

The ministry is proposing the action, based on the decision of the Accreditation Commission, to strip the four schools of university status because of their failure to correct problems found in the comprehensive accreditation process completed in 2009, during the first Fico government. The ministry proposal must be approved by parliament.

The Accreditation Commission considers a university to be a school that provides study programmes at the levels of bachelor’s degree, master’s degree and PhD, as well as engaging in research. A school that provides education only at the first two levels is considered to be a high school and is not required to pursue research.

Two of the four schools are state-run universities: the Police Academy in Bratislava and the Military Forces Academy of M. R. Štefánik in Liptovský Mikuláš. The other two schools are public universities – the Trenčín University of Alexander Dubček and the János Selye University in Komárno, the only university in Slovakia that uses Hungarian as the language of instruction.

“It is just a cosmetic change which doesn’t mean anything in reality,” Králiková told The Slovak Spectator about the loss of the university status for these four schools.

The four schools will be eligible to undergo the process of comprehensive accreditation in 2014 and could receive the designation of universities again if they meet the requirements of the Accreditation Commission.