High hopes for medals at the London Olympics

THE SMALLEST team ever, with half its athletes competing for the first time at a Summer Olympic Games: these are two characteristics often stated about the Slovak team competing at the world’s most prestigious sporting event, in London. Over the next two weeks many Slovaks will tune in to watch the 30th edition of the modern-day Olympic Games in the capital of the United Kingdom, hoping that several Slovaks will return home with medals. 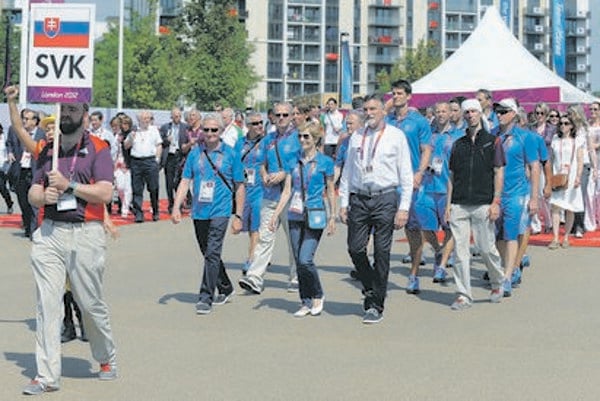 THE SMALLEST team ever, with half its athletes competing for the first time at a Summer Olympic Games: these are two characteristics often stated about the Slovak team competing at the world’s most prestigious sporting event, in London. Over the next two weeks many Slovaks will tune in to watch the 30th edition of the modern-day Olympic Games in the capital of the United Kingdom, hoping that several Slovaks will return home with medals.

“The Slovak contingent will have 85 members [including support staff] in total and is the smallest in the history of independent Slovakia,” stated František Chmelár, the head of the Slovak Olympic Committee, as he introduced the Olympians to President Ivan Gašparovič on July 10 as they were sworn in as members of the national team. Chmelár said he believes quality is what makes magic, not quantity. “I believe this is a quality team and that it will represent Slovakia well at the Olympic Games.”

The Slovak team is small because none of its teams, only individual athletes, qualified for the games. Chmelár stated that sports in Slovakia are standing still or heading down, a particular problem in team sports. He added that the outlook is better for competitors in individual sports as it is often enough when a family keen on a specific sport supports the athlete.

“For a small European country such as Slovakia it is becoming increasingly difficult to have a large numbers of athletes qualify for Olympic disciplines,” Chmelár wrote in the media guide to Slovakia’s participation at the London Olympics. “Limitations on the number of national team members imposed by the International Olympic Committee are strict. Competition around the world is getting stronger and widening. As the conditions for sports in Slovakia are far from ideal, this has had an impact on the size and structure of the Slovak Olympic Team for the Games of the 30th Olympiad in London.”

The Slovak Olympic team remains strong in events such as canoeing, both slalom and sprint, as well as shooting. There are also high hopes that Slovak athletes could return with medals in tennis and road cycling. Slovak athletes won six medals, three gold, two silver and one bronze, at the Olympic Games in Beijing, the country’s most successful outcome in its history.

“It will make us satisfied when everybody gives everything regardless of what event he or she competes in,” Chmelár told the TASR newswire. “We will have had very bad luck to return without any medals. We have as many as 15 athletes who can win medals.”

Chmelár stated his actual expectation is for six medals and added that he does not have any secret expectations like he did in 2010 when biathlete Pavel Hurajt won a bronze medal at the 2010 Winter Olympics.

White-water canoeing is one of the sports in which Slovak athletes are expected to do well. The Slovak teams entered in the sport’s two disciplines, canoe slalom and canoe sprint, feature a number of seasoned athletes who already hold Olympic medals and world records.

Twins Pavol and Peter Hochschorner, 32, racing in the canoe double (C2) slalom are attending their fourth Olympics and have previously won three Olympic gold medals in the C-2 event, in 2000, 2004 and 2008. They became the first triple Olympic winners in the history of this category and have the most gold medals among Slovak athletes in either the summer or winter Olympics.

“It is very courageous to speak about victory,” Peter Hochschorner told the SITA newswire prior to his departure for London. “We want to achieve the best results possible. The biggest motivation is to win gold and set records. The Olympic Games are a great motivation and challenge. This is the most that an athlete can achieve in his career.”

“I think he is still the best. I’m not making wild guesses; the facts persuade me,” Jozef Martikán, the medallist’s coach and father, told TASR. “If he makes a standard ride, he will win.”

“With regards to my successes from previous years in the canoe slalom I also have the biggest ambitions,” Dukátová told SITA. “I will try to do the best possible and win a medal. For me this is a great reward, to compete at the Olympics. Since my childhood it was a great dream of mine.
Because of the limit of one boat I could not compete in the past; now it is time for me.”
But Dukátová added that it is very difficult to make predictions in the kayak slalom as there are many factors that can affect the final time. She thinks that five to six kayakers have a shot at the gold medal.

Slovakia has eight athletes who will compete in the category of canoe – sprint with seven participating in kayaking (single, double or four-person) and one participating in a single canoe.
Erik Vlček, Peter Gelle, Martin Jankovec and Juraj Tarr will compete in the K4 1000m event. The team had a last-moment change when brothers Michal and Richard Riszdorfer were replaced by Peter Gelle and Martin Jankovec. The Riszdorfer brothers qualified for the Olympics at last year’s world championship in Szeged, Hungary but the presidium of the Slovak Association of Canoe Sprint changed the team’s makeup in early July. This deeply disappointed Richard Riszdorfer, who described it as violation of selection criteria and alleged that friends of Tarr and Vlček were behind this change. Richard Riszdorfer has two Olympic medals in the K4 1000m event: a silver from 2008 and a bronze from 2004. Tarr holds a silver medal from the 2008 Olympics and Vlček received a silver medal in 2008 and a bronze in 2004.

In addition to the K4 1000m event, Gelle and Vlček will compete in the K2 1000m event.
Vlček hopes that the team will advance to the finals so it can compete for the medals.
“We will be satisfied if we bring home one medal,” Vlček told SITA, adding that they have the same chance in both disciplines.

Slovakia has five athletes competing in swimming, the highest number in its history. Denisa Smolenová will compete in the 100m and 200m butterfly events and had been nominated to represent the country on June 20. The other four, Tomáš Klobučník (200m breaststroke), Katarína Filová (100m and 200m freestyle), Miroslava Syllabová (50m freestyle) and Katarína Listopadová (200m individual medley), are all making their debuts in London and were nominated to represent Slovakia only on July 1.

“The nomination was a huge shock for me,” Filová told SITA. “I was on holiday in Croatia when the coach called me.”

Smolenová, 23, will be competing in her second Olympics in London.

“For each competition I go with the ambition to swim my personal record,” Smolenová told SITA. “I’m going with a similar goal to London. My goal does not apply to positions but rather to times.”
Martina Moravcová, 36, a winner of two silver Olympic medals in 2000, did not qualify for what would have been her sixth Olympics.

Shooting is another sport in which Slovak athletes have high hopes. The team in this sport features seasoned shooter Jozef Gönci, 38, who is attending his fifth Olympics in a row. He will also carry Slovakia’s flag during the opening ceremony. Gönci has won two bronze medals in previous Olympics, in 1996 and 2004, and plans to give his farewell effort in London.

“I want to end up to the 15th place at least two times,” Gönci, who will appear in three events, told SITA. “I know that Slovak fans always have huge expectations, but now shooting is so balanced that if I falter in any item, I fall immediately by five or 10 positions and I’m actually out of the game.”

Gönci sees it as important to avoid making a careless mistake at the beginning of the competition so that he gains self-confidence.

“Shooting is a presentation of tension,” Gönci stated. “Hardly anybody realises the psychological pressure that an athlete has to deal with.”

The shooting team has seven athletes including three women who first attended the Olympics in Beijing. One of them, Zuzana Štefečeková, now aged 28, returned from the 2008 games with a silver medal. She is one of the medal hopefuls for the Slovak team even though she has not won a medal in any tournament this year. She finished fourth at the world championship in London.

“This year I have not been psychologically strong enough to win any medals,” Štefečeková told SITA. “At the Olympics I want to advance to the final. When I achieve this, it will be a victory for me. If I manage something more, it will be a bonus.”

Other athletes who have a chance for a medal in London are tennis player Dominika Cibulková, 23, and cyclist Peter Sagan, 22 (see story on page 12).

Just a few days before the opening of the games in London, Cibulková won the Mercury Insurance Open on July 22 in Carlsbad, California, capturing her second WTA title and her first since last October.