SHOWING another country’s culture in Slovakia can mean a range of things, from offering controversial contemporary artworks, through supporting direct exchange of experiences, to commemorating classic personalities and events that are an inseparable part of the history of both countries. 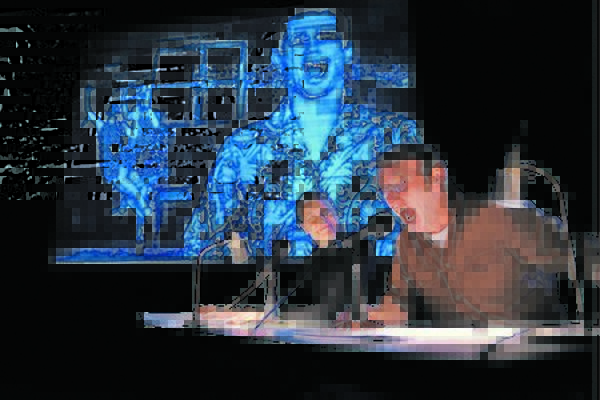 SHOWING another country’s culture in Slovakia can mean a range of things, from offering controversial contemporary artworks, through supporting direct exchange of experiences, to commemorating classic personalities and events that are an inseparable part of the history of both countries.

“We have offered a large number of events exhibiting the creativity of the United Kingdom,” Alena Rebrová, the head of the British Council in Slovakia, told The Slovak Spectator. “They have ranged from various activities at the Pohoda Festival, introducing new British films, and Literature Night – for which we selected the Slovak translation of The Good Man Jesus and the Scoundrel Christ by Philip Pullman,” adding that “as the title suggests it is perhaps not completely free of controversy. And that is what we like to do – stimulate discussion”.

When speaking about past activities offered by the British Council, Rebrová mentioned the Void Story theatre performance staged by the Forced Entertainment theatre group from Sheffield in September, first within the Divadelná Nitra festival and then in Košice as part of the city’s upcoming designation as a 2013 European Capital of Culture. The theatre, directed by Tim Etchells, was “questioning, pushing, stretching and breaking the theatre in many ways to see what can be built from the wreckage”, as the group stated in the promotion of its work. Both its performances in Slovakia drew full houses. This September the company will return to the Nitra festival, this time with a piece named Tomorrow’s Parties.

“We could not miss something as classic as the celebration of the 200th birthday of Charles Dickens,” Rebrová noted. “However, our innovation was in the way we did it, as our offer came mostly virtually, enabling people from all parts of Slovakia to join in. That signals how we see the future – with a growing digital portfolio. It might not be everybody’s preference but it is saving resources and it brings opportunities for more people to interact when it would be too expensive to physically bring something to Slovakia.”

Presenting the UK via the London Olympics

The British capital is hosting the 2012 Summer Olympic Games and the British Council in Slovakia could not miss such an opportunity. It has developed an extensive programme around the Olympic Games, officially supporting the London 2012 festival which opened on June 21 and lasts for 12 weeks throughout all of the UK, featuring 25,000 artists from all over the world. There are plenty of English-language materials within the English for the Games project, Rebrová added, mentioning also a programme celebrating arts, culture and sports by disabled and deaf participants.

In winning its bid to host the Olympic Games, the UK promised to reach young people across the world and the British Council plays a strong part in achieving that goal: in Slovakia, it focuses mainly on schools, with language resources (including a Teaching Centre) and a publication titled English for the Games. A recent highlight was a table tennis match between Slovakia’s Education Minister, Dušan Čaplovič, and the UK’s Minister for Europe, David Lidington, as well as Slovak Paralympics players invited by the British Embassy to highlight the importance of both the Paralympic Games and the Olympic Games.

Rebrová praised the British Council’s successful collaboration with several local partners such as the Košice European Capital of Culture committee, the Slovak Design Centre and the DESIGN FACTORY, the Creative Industry Forum and BLAF (the Bratislava Arts Festival), particularly stressing its fruitful cooperation with the Slovak Culture Ministry.

“Together, we have explored the significance of the creative industries for a country,” she explained. “The main idea is to show that creative people are very good at establishing jobs for themselves as well as for others; so it makes sense for governments to support them – be it in Slovakia, in the UK or elsewhere.”

To make this idea more visible and palpable, the British Council also offered a Young Creative Entrepreneur competition. Last year’s winner, designer Dana Kleinert, won a trip to London Fashion Week and returned so enthused by the atmosphere in London that she established the Slovak Fashion Council because Slovakia lacked a body uniting fashion designers, producers and retailers. Kleinert has been successful in getting most of the big names in Slovakia on board. Sally Denton, a British fashion marketing guru who visited Slovakia at the invitation of the Slovak Fashion Council commented that “it was really fantastic to see all the hard work you put in... you should be immensely proud of what you achieved.”

Life will go on after the 2012 Summer Olympics and the British Council has many events planned for the future. A long-term project is in cooperation with FM Radio in which Slovak audiences can listen to the pioneering weekly music radio show called “Selector” every Thursday at 20:00, a showcase of the best new music from the UK.

“There are several wrap-around activities such as DJs from the UK performing here during the year,” Rebrová added.

“We will continue working with other EU cultural institutes on Literature Night, cooperating with Slovak partners such as the Slovak Fashion Council, BLAF, Pohoda, and Košice 2013 to showcase innovative art and ideas from the UK throughout this year,” Rebrová said, adding that “just round the corner – in September – we can look forward to another Forced Entertainment show called Tomorrow’s Parties at the Divadelná Nitra theatre festival”.

Even though English is a widely taught and used language in Slovakia, culture is more than just language and the exchange of experiences, ideas and know-how between two countries boosts mutual awareness, cooperation and creativity. All of the British Council’s activities in Slovakia can be found on its Facebook site or at www.britishcouncil.org/slovakia.