India and central Europe connect – via music in Bratislava

THE SLOVAK capital has already seen and heard Indian musicians – and even witnessed Indian and Slovak musicians perform onstage together. But the latest novelty was the combination of one musician from India and another from Hungary (albeit with Slovak roots), introduced to a packed audience at the Hudobné Centrum (Music Centre) concert hall in Bratislava’s Zichy Palace by a second Hungarian, this one a music expert. 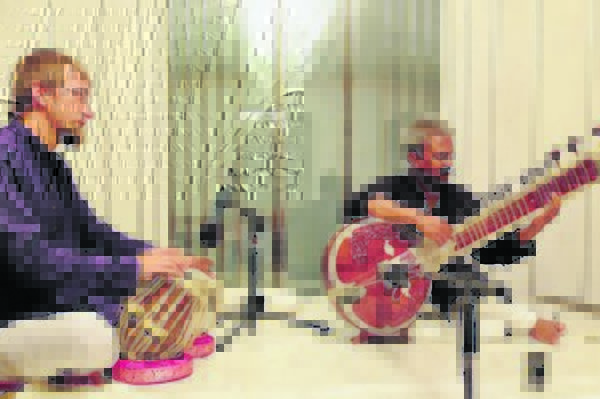 THE SLOVAK capital has already seen and heard Indian musicians – and even witnessed Indian and Slovak musicians perform onstage together. But the latest novelty was the combination of one musician from India and another from Hungary (albeit with Slovak roots), introduced to a packed audience at the Hudobné Centrum (Music Centre) concert hall in Bratislava’s Zichy Palace by a second Hungarian, this one a music expert.

The concert, Connecting India, which took place on July 9, was organised by the Shiraz agency and prefaced with a discussion by Szabolcs Tóth from Hungary, an expert on classical Indian music. A surbahar, the instrument that was played on this occasion by Indian musician Rajeev Janardan, is not particularly common even in India – and it is almost impossible to hear it outside the country. It is a plucked string instrument used in Hindustani classical music and is closely related to the sitar, but with a lower tone. Tóth said that Indian classical music was the oldest unbroken musical tradition in human history. He described it as a complex language (with words, sentences and its own grammar) which was recorded about 2,000 years ago in books that still exist and are used currently – although it has changed and continues to evolve, including the emergence of new instruments. Thanks to the rules of its language, musicians of different origins and mother tongues can play together without much rehearsal.

Rajeev Janardan’s surbahar was joined by the tabla percussion instrument played by Tibor Mótyán from Hungary (whose father is of Slovak origin). They performed what Tóth called a full description of a musical entity consisting of several parts, the first being a solo for surbahar, later joined by tabla (with some tabla solos). Downplaying his short introductory lecture, Tóth called on audience members to forget his words, empty their minds and just enjoy the concert. The musicians then played for about 45 minutes, followed by a short but enthusiastic photo session in which visitors took pictures of the rare surbahar.

Unlike many Indian musical masters, Janardan does not come from a traditional musical family, he told The Slovak Spectator. However, as soon as he started to learn music at school as a hobby, his life changed. He focused fully on training and from the age of 15, he started winning awards. He first learned guitar and singing, only later turning to the sitar. In his style, he combines the vocal style of classical music with an instrumental style. Asked how he found his way to Slovakia, he admitted that he first discovered Hungary thanks to Tóth, and only later its neighbour.

Mótyán told The Slovak Spectator that he has always been fascinated by percussion instruments and in exploring their different types. That is how he came to know the tabla, the classical Indian percussion, which then opened the gate for him to the whole realm of classical Indian music. He noted that there are very good teachers of Indian classical music in Europe – in Austria, the Netherlands, and elsewhere – and added that he himself learned from a Hungarian, László Hortobágyi. Finally, Mótyán went to India, where he intensively studied the style for about a year. He explained that although this was only his second concert with Janardan and they had not seen each other for years, the musical system they use is so strict that a joint performance did not require more than 2 minutes of rehearsal.

Tóth, praised by both Janardan and Mótyán as both a musician and an organiser, studied composition and later worked as a composer of European music. But he told The Slovak Spectator that in spite of being busy, he felt some kind of emptiness and restlessness, and was looking for something that would fill him completely.

“Then I came to hear a vinyl LP of Vilayat Khan and Bismillah Khan, an album of duets called Ecstatic Jugalbandi,” Tóth related, “and there is a piece on it which is 13 minutes long, and during these 13 minutes, something changed in me. My wife was sitting next to me and she understood that something had changed. First I came to India to research the music, and later I met Rajeev Janardan who taught me also to play. I started seeing the whole background behind this music and later I launched a radio programme focused on Indian classical music: this year will be the tenth anniversary of its running,” he said.

It seems – and not just from the full concert room on a hot July evening – that this musical genre has a growing popularity in Slovakia; there are several student-players in the country and the translator of the evening himself is attempting to become a sitar player. In the future, Slovakia, or the wider central European region, might well become an incubator of players – and fans – of classical Indian music, an ancient but vibrant tradition.