SLOVAK athletes have scored three bronze medals at the 2012 Olympic Games in London so far, failing to fully meet medal expectations pinned on them. While the bronze for shooter Danka Barteková, for whom London was her first Olympics, was a positive surprise, bronze medals have left seasoned Michal Martikán and twins Pavol and Peter Hochschorner a bit disappointed. Kayaker Jana Dukátová, who also debuted at the 2012 Games, was sixth. This means that after previous Games Slovakia will return from this category without a medal. 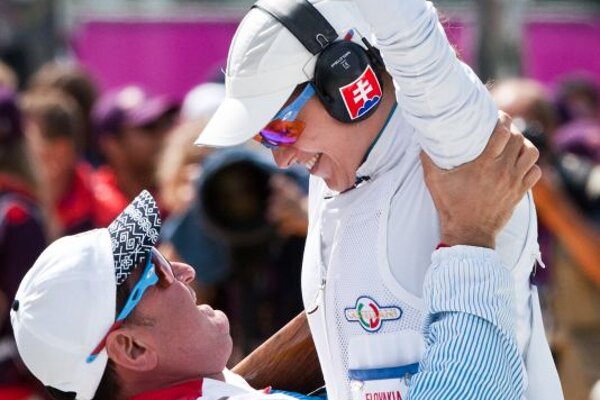 SLOVAK athletes have scored three bronze medals at the 2012 Olympic Games in London so far, failing to fully meet medal expectations pinned on them. While the bronze for shooter Danka Barteková, for whom London was her first Olympics, was a positive surprise, bronze medals have left seasoned Michal Martikán and twins Pavol and Peter Hochschorner a bit disappointed. Kayaker Jana Dukátová, who also debuted at the 2012 Games, was sixth. This means that after previous Games Slovakia will return from this category without a medal.

Shooter Danka Barteková won the first Olympic medal for Slovakia in London, a bronze, on the second day of the games.

The 27-year-old native from Trenčín, who placed eighth in Beijing in 2008, qualified for the finals out of six shooters from second position. She then managed to gain 90 points and beat Russian shooter Marina Belikovová (4:3) in a shoot-out.

“I cried in Beijing and now I’m crying again,” Barteková, who devoted the last two years preparing for the Games, told the TASR newswire. “But there is a big difference, because then I cried with disappointment and now I’m doing so because I’m happy.”

Slalom canoeist Michal Martikán won a bronze medal in the men’s canoe single on July 31 after he fell behind his biggest rival – and, ultimately, the gold-medal winner – Frenchman Tony Estanguet, by 1.25 seconds. Sideris Tasiadis from Germany won silver.

“Somewhere inside I’m happy, but I’m also a bit disappointed,” Martikán said, as quoted by TASR. “Before the Olympics I longed for gold, but in the finish I knew that after my small mistakes in the ‘paddling’ track, my time would not be enough for a victory.”

The 33-year-old bronze medallist, who already holds two gold and two silver medals from the previous four Olympic Games, said that he was not completely happy with his performance, adding that there is always room for improvement.

“I was convinced that I would be faster in the finals, as I conserved enough energy for it,” Martikán told TASR. “I always maintain that it's possible to go even faster and do away with even the tiniest mistakes in the race, which means that one can push down the seconds as well. In other words, I could have pushed stronger with every stroke.”

But while Estanguet is pondering an end to his competing career, Martikán is far from this and even hopes to participate at what would be his sixth Olympics.

“I love this sport and I still have a [strong] passion for it inside of me,” Martikán told the Sme daily. “I hope that I will be healthy and I will fight for a place in Rio de Janeiro.”

Twins Pavol and Peter Hochschorner finished third in the canoe double (C2) slalom on August 2, ascribing the bronze to mistakes they made during the ride.

“I’m angry with myself,” Peter Hochschorner said as cited by the SITA newswire. “We spoiled it ourselves. We made mistakes and this has pushed us into third place.”

Nevertheless, the twins are already Olympic legends considering that this is their fourth Olympic Games. The 32-year old twins became the first triple Olympic winners in the history of this category when they won three gold medals in the C-2 event, in 2000, 2004 and 2008.

Dukátová, 29, did not match the successes of Elena Kaliská, the gold medallist from Beijing and Athens when she finished sixth in the K1 discipline on August 2. Because there is a limit of only one boat for each country at the Olympic Games, Dukátová had to first overtake Elena Kaliská, 40, before she could compete in London.

No other Slovak athletes have made significant placements this year.

Road cyclist Peter Sagan, who took the green jersey in the 2012 Tour de France cycling race, participated in the opening day cycling competition at the London Olympics on July 27. However, Sagan, who won three stages at the Tour de France, was the only Slovak athlete in the competition and finished 34th.

In shooting, seasoned shooter Jozef Gönci, 38, who is attending his fifth Olympics in a row, finished 31st in his first category, men’s 10m air rifle. Gönci, who won two bronze medals in the 1996 and 2004 Olympics, and plans to give his farewell effort in London, will compete in two other rifle disciplines - 50m rifle prone, 50m rifle 3 positions.

The Games ended for Slovak tennis players on August 1 when Daniela Hantuchová lost against Caroline Wozniacka 4:6, 2:6 in the third eight-final round. All other Slovak tennis efforts ended in the first round.

The current Olympic team of Slovakia is the smallest in the history of independent Slovakia, numbering only 46 athletes, for whom half London is their first Olympic Games.