THE PICTURE of an old man opening his front door wearing only his underwear and socks would have been pathetic, had it not been for his identity. For the person captured on camera in Budapest last month by journalists from the British tabloid daily The Sun was László Csatáry, listed by the Simon Wiesenthal Center (SWC) as the world’s most-wanted surviving Nazi war criminal. 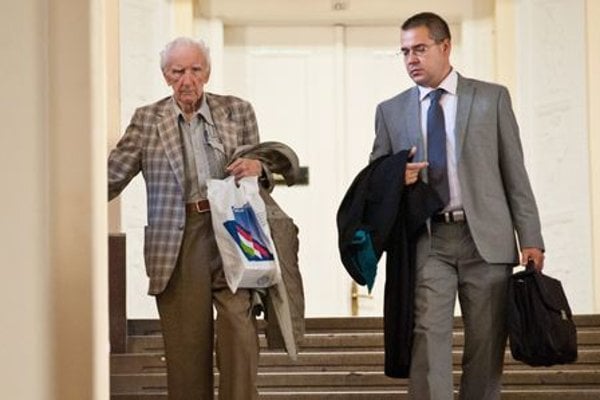 THE PICTURE of an old man opening his front door wearing only his underwear and socks would have been pathetic, had it not been for his identity. For the person captured on camera in Budapest last month by journalists from the British tabloid daily The Sun was László Csatáry, listed by the Simon Wiesenthal Center (SWC) as the world’s most-wanted surviving Nazi war criminal.

The British journalists tracked down the 97-year-old former policeman, who is alleged to have been responsible for the deportation of approximately 16,000 Jews from Košice during World War II, in a flat in an upmarket district of Budapest on July 15. For most of the war, Košice – then known as Kassa – was under Nazi-allied Hungarian control, following its annexation from Czechoslovakia in 1938. Police detained Csatáry on July 18 and later that day the Buda Central District Court of Justice placed him under home detention, the TASR newswire reported.

Csatáry now faces prosecution by Hungarian authorities based on a lawsuit submitted by the SWC in September 2011. However, Slovak authorities have already become involved in the case, saying that Hungary should extradite him to Slovakia.

“We understand that regarding the big time interval [between the crimes being committed and Csatáry’s arrest] we face one of the last chances to punish war crimes from the Second World War,” Justice Minister Tomáš Borec told a press conference on July 30, as quoted by the SITA newswire.

He added that he had already sent the necessary documents to the district court in Košice requesting that they deal with the case using an accelerated procedure.

Meanwhile, the district prosecutor’s office in Košice has received a criminal complaint about Csatáry from a local resident whose father he allegedly sent to a concentration camp in Germany, the Sme daily wrote on August 2. Based on this complaint it is very likely that a prosecution will also be launched in Slovakia.

However, Efraim Zuroff, a director of the Simon Wiesenthal Center office in Jerusalem, said that it would be better if the trial took place in Hungary since Csatáry “committed the crimes in the name of Hungarian government”.

“The question is: who needs the lesson?,” Zuroff told The Slovak Spectator. “And the people who need the lesson are the people in Hungary.”

Csatáry was born in 1915 in the Hungarian village of Mány, near Budapest. During World War II he served as a senior police official in Kassa, from where he organised the deportations of approximately 300 Jews to their deaths in Kamyanets-Podilsky, in present-day Ukraine, in 1941, and another 15,700 Jews to the Auschwitz extermination camp in German-occupied Poland.

Though he escaped after the war, he was tried in absentia in 1948 in Košice, which had by then been returned to Czechoslovakia. Several victims described Csatáry as a cruel sadist who enjoyed torturing Jews as well as pro-democratic inhabitants of Košice who criticised the Nazi regime, Košický Večer, a supplement to the Korzár daily, wrote.

In addition, Csatáry was blamed for deaths of several Košice residents who were shot shortly before the town was liberated by the Soviet Red Army.

Csatáry was convicted of war crimes and sentenced to death and confiscation of his personal property.

After the war, Csatáry spent more than 50 years in Canada under an assumed identity, where he worked as an art dealer. However, authorities there discovered his true identity in 1995 and launched an investigation. As part of this they visited Slovakia’s archives in order to search for the relevant documentation. In 1997 Csatáry fled Canada and moved to Hungary, where he hid successfully for 15 years.

One reason that Csatáry succeeded in escaping justice for such a long time could be the fact that at the end of the war the victorious nations focused on detaining the political, financial and security elites of Nazi Germany and its allies and paid less attention to “small fry” such as Csatáry, Ivan Kamenec from the History Department of the Slovak Academy of Sciences (SAV) told The Slovak Spectator.

As well as this, Csatáry escaped just as the Cold War was beginning, so he could claim that he was fleeing a new, communist totalitarian system, Kamenec added.

Kamenec also commented on the fact that Csatáry had settled in Hungary and managed to hide there for another 15 years, saying that at the moment there is “some kind of idealisation” of that country’s wartime regime. He added that in several countries, including Hungary and Slovakia, there have been attempts “to restore the [kind of] regime that allowed Csatáry and people like him to violate basic human rights”.

He referred in particular to the fact that in Hungary several monuments to that country’s wartime leader, Admiral Miklós Horthy, have recently been erected.

The Simon Wiesenthal Center first informed the Hungarian authorities of Csatáry’s address in September last year, after receiving an anonymous tip-off for which they reportedly paid $25,000. The campaign to bring remaining Nazi war criminals to justice by offering financial rewards for information leading to their arrest and conviction, known as Operation Last Chance, was launched in July 2002, according to the campaign’s official website.

“First, if we had not given the information to prosecutors, and if we had not publicised the case I am very doubtful whether Csatáry would ever face justice,” Zuroff told The Slovak Spectator.

He said he considers the detention of Csatáry to be a very important step since “it sends a message that if you commit crimes, like the crimes of the Holocaust, even many years later you can still be brought to justice”.

Csatáry’s ability to avoid justice for so long is exceptional, said Pavol Sitár, deputy chair of the Federation of Jewish Communities in Slovakia (ÚZŽNO). He added that Csatáry should realise he will not now escape punishment as he did after the war.

“He deserves the troubles he has and deserves also the uncertainty [hanging] over the rest of his life,” Sitár told The Slovak Spectator.

Csatáry is currently waiting for formal charges to be laid by the Hungarian prosecutor’s office. He claims that he is innocent and that he only took orders from his superiors. His lawyer Gábor Horváth even claimed that the witnesses could have mistaken him for someone else since they often referred to “a man in black uniform”, something which was normally worn only by German and not Hungarian police officers, the TASR newswire wrote.

Kamenec stressed that several war criminals recited the same explanations before the Nuremberg trials, which dealt with the most prominent representatives of Nazi Germany.

“An order is one thing, but the other is this surplus labour he was doing,” the historian added, referring to the cruelty described by the witnesses in 1948.

The first to ask for the extradition of Csatáry to Slovakia was the Jewish community.

“The witnesses live in Slovakia; there are actually none in Hungary,” said Igor Rintel, chair of Slovakia’s Central Union of Jewish Communities (ÚZŽNO), as quoted by TASR.

Moreover, it was Czechoslovakia whose courts sentenced Csatáry to death in absentia in 1948, thus “there is a bigger supposition that justice will be finished in real time in the Slovak Republic”.

Rintel added that though most of the witnesses are of an advanced age, justice in Csatáry’s case should be done at least symbolically, as the crimes against humanity that he committed are not subject to any statute of limitations, TASR wrote.

If Slovakia wants to seek Csatáry’s extradition, the court which passed the original verdict has to issue a European arrest warrant. To issue a warrant, the authorities need to send the relevant documentation, including the whole file describing the investigation, testimony and verdict from 1948.

Though it at first seemed that the original verdict had gone missing, the Slovakia’s Nation’s Memory Institute (ÚPN) announced on July 25 that it has a copy in its archives.

Asked whether he believes Csatáry will really stand trial, Kamenec said that everything depends on his extradition to Slovakia. Hungary will have to start a completely new investigation, while in Slovakia the documentation from 1948 already exists, he stressed.

Moreover, he assumes that “in Hungary they will try to prolong [the investigation] and will wait for the natural death of this person”, adding that there something similar had happened in other cases involving war criminals.