SLOVAKIA’S public broadcaster Radio and Television of Slovakia (RTVS) has a new director, Václav Mika, who previously managed a private television network and a radio station. Mika, the former director of Markiza TV and Radio Express, was elected by parliament in a secret vote on August 1 by 74 of the 95 deputies present, out of the 150-member Slovak parliament. 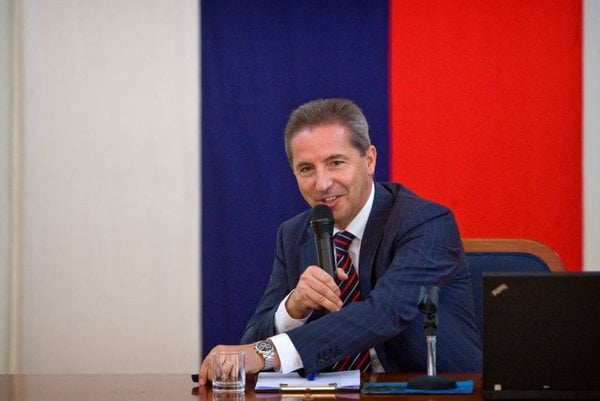 SLOVAKIA’S public broadcaster Radio and Television of Slovakia (RTVS) has a new director, Václav Mika, who previously managed a private television network and a radio station. Mika, the former director of Markiza TV and Radio Express, was elected by parliament in a secret vote on August 1 by 74 of the 95 deputies present, out of the 150-member Slovak parliament.

The parliament chose Mika from a pool of 11 candidates with the head of the state-run newswire TASR Jaroslav Rezník being widely viewed as his main rival. Yet Rezník received only two votes; film director and producer Iľja Ruppeldt received three and television sport presenter Pavel Jacz got a single vote, with eight of the 95 votes being invalid. The opposition boycotted the vote in response to the circumstances of the removal of the previous director Miloslava Zemková, SITA newswire reported.

“I was surprised that my greatest competitor, as I sensed [that Rezník was] got just two votes,” said Mika, as quoted by the Sme.sk website, adding that he did not have any direct negotiations with the ruling Smer party, which holds the majority in parliament.

The government of Robert Fico cut the five-year term of the previous director of the RTVS Zemková short earlier this year over what her critics called her failure to notify the oversight body, the RTVS Council, about her plans to lease the RTVS premises.

Mika however was elected in the midst of an ongoing debate over the legitimacy of Zemková’s dismissal as she has challenged the decision with the Constitutional Court. According to Radoslav Procházka of the Christian Democratic Movement (KDH), the pending court decision might mix up the cards with regard to new RTVS head, according to SITA newswire.

Nevertheless, Mika is ready to fully take up his job as he said that in next few weeks he would get acquainted with the situation within the RTVS and analyze it so that he is able to make what he calls competent decisions. As for his priorities, Mika said that he would devote more attention to the television unit, and that despite his background in radio, he nevertheless assumes that television is in more urgent need of attention, according to SITA.

Opposition parties, Freedom and Solidarity (SaS), Slovak Democratic and Christian Union (SDKÚ), Most-Híd and KDH did not attend the vote, calling it a political masquerade. The opposition argues that Zemková was dismissed illegally. Nevertheless, some Ordinary People and Independent Personalities [OĽaNO] deputies participated in the vote, although most of them cast empty ballots, rendering their votes invalid, according to SITA.

“If the Smer party unlawfully suspends a [former] general manager, it should elect a new one on its own, thereby taking full responsibility for the next evolution of RTVS,” Pavol Abrhan of the KDH, a member of the parliamentary media committee that oversaw the candidates, told The Slovak Spectator.

One of the unsuccessful candidates, Ľubomír Belák, wrote in a complaint that the election committee violated ethical principles during the election process as he did not receive information that the candidates’ presentations were to be cut to 10 minutes until the day of the actual hearing, SITA newswire reported.

Originally, 15 minutes were planned for the presentation and an additional 15 for the questions but then both sessions were reduced to 10 minutes. Belák is however dissatisfied with the entire course of the hearing, suggesting that candidates “favoured by media” were given more time to respond the committee’s questions than the rest of candidates.

Mika and Rezník faced the committee for the longest period of time due to the large number of questions asked by committee members, said the head of the Committee Dušan Jarjabek, as quoted by SITA.

While he was head of Slovak Radio (SRo) Rezník received criticism for various contracts he had overseen, while SRo accumulated approximately €9,000,000 in debt, and TASR ran up a €474,000 deficit in 2011, all while under his direction. On the other hand, while under Mika’s management, TV Markíza remained the market leader and launched its second channel, TV Doma, yet he left TV Markíza of his own volition without explaining his reasons, according to SITA.

When asked about the course of the hearing, Rezník told The Slovak Spectator that it was a correct and professional hearing from both sides. When asked to evaluate his performance in broadcast media, Rezník noted that he has been operating in the public media for the entire time and that “here I subjectively evaluate [my performance] as efficient and successful” which according to him can be illustrated by functioning systems in both Slovak Radio and TASR.

Václav Mika wants to focus on RTVS and its loss of viewers, while he is content with the number of Slovak radio listeners and does not want to make changes in that area. He would like to modify news reporting, yet wants to retain the current professional staff, claiming they would be difficult to replace.

Mika would like to see multichannel development of the television section of RTVS, with the creation of a second channel to provide public service broadcasts for minorities, interest groups and more intellectual and demanding viewers. There are no funds for a proposed third sports oriented channel, yet sports programmes are broadcast on the first and second STV channels, which were originally intended for other types of programming, according to Mika, Sita reported.

Rezník proposed during his presentation that the first STV channel should offer educational, informational and entertainment programmes while the second channel should be focused on news, using Czech TV station ČT 24 as an example. Rezník also proposed launching a third channel in September 2014, and maintained that Slovak Radio should have five equal radio channels.