THE SLOVAK state coffers are shallower that originally expected. After economic analysts calculated that the general government budget this year would fall short millions of euros, primarily due to fewer taxes being collected, Prime Minister Robert Fico called an emergency cabinet session after which he, in the presence of journalists and in a demonstrative gesture, tore a piece of paper into shreds. The session’s outcome was that the government must adopt austerity measures worth almost €500 million if it wants to stick to its budgetary goals for this year – a 4.6 percent deficit. Otherwise the deficit would be 5.3 percent. 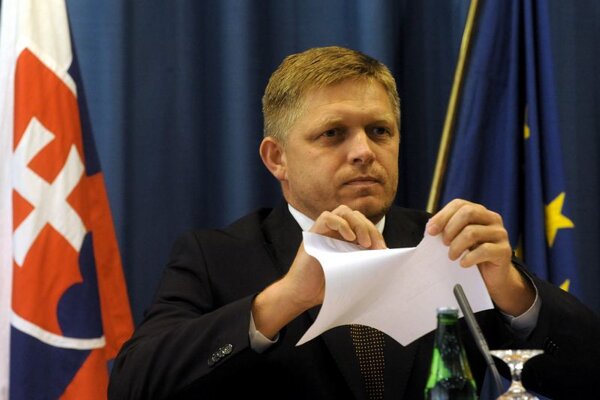 THE SLOVAK state coffers are shallower that originally expected. After economic analysts calculated that the general government budget this year would fall short millions of euros, primarily due to fewer taxes being collected, Prime Minister Robert Fico called an emergency cabinet session after which he, in the presence of journalists and in a demonstrative gesture, tore a piece of paper into shreds. The session’s outcome was that the government must adopt austerity measures worth almost €500 million if it wants to stick to its budgetary goals for this year – a 4.6 percent deficit. Otherwise the deficit would be 5.3 percent.

Fico believes that these budgetary problems were inherited from the previous cabinet of Iveta Radičová.

“The budget of Iveta Radičová cabinet is in tatters,” said Fico on July 30 as cited by the SITA newswire.

“This year’s value-added tax returns are one percent lower than last year’s,” said Kažimír, highlighting that during the first quarter of 2012 Slovakia’s gross domestic product increased by over 3 percent and that local consumption increased as well.

Another reason behind the lower VAT is so-called cross-border tourism, when Slovaks travel abroad, for example, to buy petrol. The third reason might be inaccurate statistics, which might include fictitious exports, according to Kažimír.

The government must also refill emergency stocks of oil products for which it needs €95 million. The state has also not yet received fees for licenses from mobile operators and other payments from the Telecommunications Office worth €64 million. The cabinet has also allocated €50 million to resolve the current health care crisis, the cabinet’s documents read.

On the other hand, the state benefited from higher than expected revenues from dividends paid by companies co-owned by the state in the sum of €80 million. Additionally, the lower than projected co-financing from the state budget and EU funds means additional budgetary revenues of €194 million.

In response to these alarming numbers Finance Minister Kažimír called for a special immediate session of the cabinet. Ministers met on July 30 and agreed to adopt austerity measures worth €500 million to keep its budgetary targets for 2012 and 2013, i.e. the public finance deficit of 4.6 percent and 3 percent of HDP, respectively.

To increase the budget, the cabinet asked parliament to make changes to the second pillar of the old-age pension scheme in a fast-tracked proceeding, so that the changes become effective one month earlier, as of September. This way the state coffers will receive an additional €40 million and about €160 million in total in 2012. This has raised criticism from the opposition, perceiving the proposed changes, which include slashing contributions to the second pillar from the current 9 percent to 4 percent, to be too radical of a change to be debated in a fast-tracked proceeding.

Another measure adopted on July 30 was to freeze spending at individual ministries totaling €120 million until the end of September 30. The cabinet will also reassess the already projected budgetary expenditures.

The legislation adopted so far, as well as proposals that are awaiting adoption in parliament, may strengthen budgetary income by €235 million this year, Kažimír told the SITA newswire. These include special levies of regulated companies and financial institutions as well as the hike in excise taxes on tobacco products.

Analysts from the Finance Ministry’s Financial Policy Institute have calculated that the collection of taxes and contributions, compared with their February forecast, would be lower by almost €250 million this year. This is despite the Finance Ministry’s improved economic outlook for Slovakia in its June update of macro-economic forecasts, up by 1.4 percentage points to 2.5 percent. The new forecast, however, did not take into consideration any new legislative changes except for the cancellation of the emission quota tax for 2012.

“The economic growth is propelled mostly by exports, i.e. with a very low positive impact on tax bases, equalling 0.1 percent of GDP,” Miroslav Kováč and Viktor Novysedlák from the institute wrote in a document published on July 27. “On the other hand, the delay in the fulfillment of tax collection this year, stagnating revenues from the excise tax of mineral oils and especially the uncertain development of the value-added tax had a significant negative effect on changes to the forecast, calculated at minus 0.4 percent of GDP.”

With regard to the VAT, its forecasted collection was reduced by €246 million. The analysts put two main reasons behind it: the disharmony between developments in the VAT and the macro-economic indicators and the inability of the financial administration to provide information on VAT collection and refunds due to IT problems.

The analysts point out that, while the latest data from tax returns were taken into consideration, the tax duty has not been developing in line with macroeconomic development, i.e., that in spite of the growing economy tax revenue is decreasing. They see tax evasion as the most possible cause behind this, but they do not exclude the added negative impact of cross-border shopping either.

In terms of IT problems, issues with the implementation of a new electronic tax processing system during the first months of 2012 resulting in postponed VAT refunds, reducing the final VAT revenues for 2011 by €73 million. This means that previous VAT revenue forecasts were higher than they actually were.

Finance Minister Kažimír also believes that some entrepreneurs took advantage of the problems with the electronic tax system for purposes of tax evasion.

The minister admitted in June that Slovakia has the second worst collection of VAT in the EU, after Greece, the Trend weekly wrote.

The worsening is so rapid that it is possible to speak about a decline, according to Trend. Analysts from the Finance Ministry’s Financial Policy Institute Novysedlák and Jana Palkovičová, in their study of the estimated losses of VAT revenue from March, wrote that the total loss of VAT was stable between 2000 and 2005. It hovered at around 18 percent of the theoretical VAT collection rate. But the loss clearly and notably increased from 2006. It achieved 35.9 percent of the theoretical VAT in 2010.

If the effectiveness with which Slovakia collects VAT were at the level of the EU countries’ average, VAT revenues would be €1.1 billion higher annually, according to Trend.