After two workshops, Japanese theatre will return to Slovakia in August

EVERY summer the Japanese embassy organises a week of artistic, cultural and social events, offering a host of performances, exhibits, and workshops. For 2012, the traditional noh theatre has become the focus – with two workshops taking place in late July in Nitra and Bratislava; and two performances slated for August 21 and 22 for the same two cities. 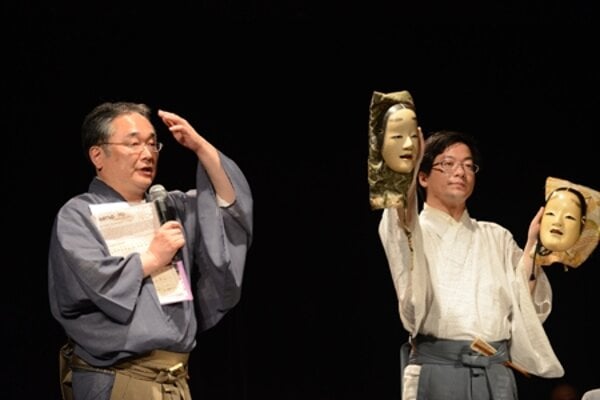 EVERY summer the Japanese embassy organises a week of artistic, cultural and social events, offering a host of performances, exhibits, and workshops. For 2012, the traditional noh theatre has become the focus – with two workshops taking place in late July in Nitra and Bratislava; and two performances slated for August 21 and 22 for the same two cities.

“Noh, the traditional form of theatre combining drama, dance, music, and poetry is about 650 years old,” Japanese Ambassador Akira Takamatsu said at the recent Japanese Evening workshop in Bratislava. “Its establishment coincides with the appearance of samurais in [Japanese] history, and is therefore connected to them,” Akihiro Yamamoto, president of the Yamamoto Noh-gakudo (Yamamoto Noh-theatre) company from Osaka explained. He added that although the masks used in noh performances do not show specific facial expressions, it is the movements and gestures of the actors that tell the story and convey a range of emotions.

The Japanese Evening workshop, held at the Ružinov House of Culture in Bratislava, was well-attended. The audience was given a lesson in singing in the special utai style, and learned about the performers’ intricate traditional costumes, which involve special fans (another important expressive tool) and masks. “The actors need help with putting on the kimono costumes, which usually takes about 15 to 20 minutes,” Yamamoto explained.

It is a good idea to read a synopsis of the story in advance (noh usually relays old myths, samurai tales or traditional folk stories) as noh is performed in old Japanese, which is difficult to understand even for Japanese audiences. At the workshop in Ružinov, Yamamoto explained the story with humour and wit. He also disproved some misconceptions about the theatre: unlike in the past, today women are allowed to act in noh productions, and the shows normally last for 3-4 hours, although there is a shortened form that runs for about 45 minutes.

“In ancient times, the noh was restricted only to chosen families and handed down through their progeny, but today it is more open,” Bulgarian Petko Slavov, Yammamoto’s apprentice, told The Slovak Spectator when asked whether non-Japanese can participate in this traditional theatre. “The main noh schools still cling to the tradition, but they also provide opportunities for other people [to participate]. As for me, I specialised in Japanese studies at the Sofia University. One day I was studying some ancient texts, and one of them happened to be a noh play translated into English. I really liked it and wanted to learn more – which started a series of events. I ended up studying noh at the Osaka University for my Master’s degree, and now I am doing my PhD. When I watched noh at the Yamamoto Noh-gakudo, I really liked it. I liked Mr. Yamamoto’s voice, and I wanted to perform: just reading the texts is not enough; I wanted to experience it from within. So I asked him to take me on as a student – and he did. For almost four years, I have [been a member], and we have become very good friends. He teaches me everything.”

Slavov added that the company was giving two workshops in Bulgaria and two in Slovakia, as preparation for the August performances. In Nitra, “Hagoromo – The Feather Cloak” will be performed on August 21 in the city park; while in Bratislava “Mrs. Aoi” will be staged on August 22 in the Main Square. The stories are translated via subtitles, so as not to slow down the rhythm of the performance, he explained.

The noh theatre performances will be part of an entire “Japanese Week” between August 20 and 24, which also includes a lecture on kimono, an origami workshop, an ikebana demonstration, a photo-exhibition showing natural and cultural UNESCO heritage sights in Japan, and a concert featuring the music of both Japanese and Slovak composers. More information can be found at www.sk.emb-japan.go.jp.