AT FIRST a little euphoria, then feelings of responsibility, followed by humbleness, but now it is down to work: this is how Václav Mika, who previously managed a private television network and a radio station, described his feelings upon being selected to head Slovakia’s public broadcaster, Radio and Television of Slovakia (RTVS). Mika has now joined Slovakia’s long roll-call of general directors since 1989, replacing Miloslava Zemková, who in June was ousted by the new government after just 18 months in the job. 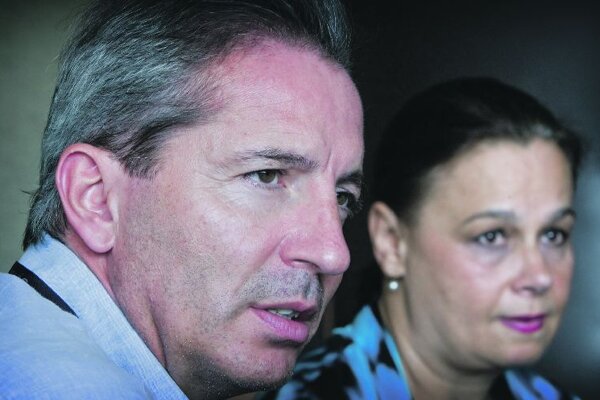 AT FIRST a little euphoria, then feelings of responsibility, followed by humbleness, but now it is down to work: this is how Václav Mika, who previously managed a private television network and a radio station, described his feelings upon being selected to head Slovakia’s public broadcaster, Radio and Television of Slovakia (RTVS). Mika has now joined Slovakia’s long roll-call of general directors since 1989, replacing Miloslava Zemková, who in June was ousted by the new government after just 18 months in the job.

Mika was elected by the 150-seat parliament in a secret vote on August 1. Of the 95 deputies present, 74 voted in favour of him. But his appointment comes amid an unresolved debate over the legitimacy of Zemková’s dismissal. She has challenged that decision at the Constitutional Court.
Opposition parties Freedom and Solidarity (SaS), the Slovak Democratic and Christian Union (SDKÚ), Most-Híd and the Christian Democratic Movement (KDH) boycotted the vote, calling it a political masquerade. KDH MP Radoslav Procházka said that the pending Constitutional Court decision might “reshuffle the cards” with regards to the appointment of the new RTVS head, according to the SITA newswire.

Nevertheless, Mika, who is the public broadcaster’s tenth general director in the 19 years since Slovak independence, took up the job immediately. The Ministry of Culture commented that “he is an undoubted expert” and said that the culture minister believes Mika will be more successful in the position than his predecessors.

After his first day in the job, on August 3, Mika said that before initiating any big changes in RTVS management he wants to learn more about what he called the real condition of the broadcaster and its personnel, at both technical and financial levels.

“If the television broadcasting is functional and credible and will be watched, and if the viewers remain loyal to it, then I will feel much more comfortable in my position and perhaps even firmer,” Mika responded when asked whether he would be the first general director to complete a full term at the public broadcaster.

One can shed the label of political nominee only through one’s work, Mika said, adding that if the public finds that the broadcaster looks different and functions without scandals he would be happy, according to SITA.

Mika, the former director of private broadcasters TV Markíza and Rádio Expres, was chosen by MPs from among a pool of 11 candidates. The head of the state-run newswire TASR, Jaroslav Rezník, was widely seen as his main rival. But in the event, Rezník received only two votes; film director and producer Iľja Ruppeldt received three and television sports presenter Pavel Jacz got a single vote, with eight of the 95 votes ruled invalid.

Zemková’s five-year appointment to manage RTVS was cut short by a secret vote by MPs in June, after the ruling Smer party insisted that she be sacked for what it called her failure as director to inform the governing body of the broadcaster about the launch of a crucial tender. Zemková, who oversaw the 2010/2011 merger of Slovak Radio (SRo) and Slovak Television (STV) into a single broadcaster, responded that there were no legal grounds for her dismissal and filed a complaint with the Constitutional Court.

Procházka said that by electing the new general director of RTVS before the Constitutional Court had ruled on Zemková’s complaint, parliament risks chaos over who is the rightfully elected general director. Procházka referred to another recent decision by the court in which it ruled that Dušan Muňko had in 2010 been removed unlawfully from his position as general director of the state-run social insurer Sociálna Poisťovňa. Muňko has since been reinstalled to the position and Procházka argued that this could end up being a very similar situation, according to SITA.

Mika said he wants to focus on RTVS’s loss of TV viewers, but is content with its number of radio listeners. He would like to modify the broadcaster’s news reporting, yet wants to retain its current professional staff, claiming they would be difficult to replace.

As for potentially unpopular measures, Mika responded that such measures are always needed yet he believes that they will not impact programme development. However, he plans to examine and revise any potentially disadvantageous contracts and obligations made under the previous management, and said he would take a closer look at activities that are not crucial for the existence of the broadcaster but which it is still paying for, SITA reported.

When commenting on RTVS’ news reporting, he said that it is a rather “big mission” and that it should be richer in terms of information, adding that the main point is not when the news programmes are broadcast but rather their content.

Mika has also said that the STV news department uses outdated technology, something he says he has the necessary experience to address, since TV Markíza upgraded its technology under his management, according to SITA.