SLOVAK athletes had won one silver and three bronze medals at the 2012 Olympic Games in London by the time The Slovak Spectator went to print on August 9, failing to fully meet the expectations pinned on them. But despite Slovak canoeists’ failure to defend their gold medals from previous Olympics, Slovakia demonstrated its continuing strength in shooting and white-water disciplines. 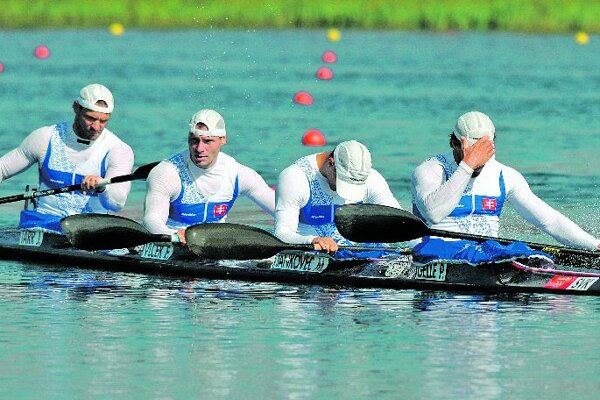 SLOVAK athletes had won one silver and three bronze medals at the 2012 Olympic Games in London by the time The Slovak Spectator went to print on August 9, failing to fully meet the expectations pinned on them. But despite Slovak canoeists’ failure to defend their gold medals from previous Olympics, Slovakia demonstrated its continuing strength in shooting and white-water disciplines.

The silver for shooter Zuzana Štefečeková and bronze for shooter Danka Barteková came as positive surprises. On the other hand, their bronze medals left seasoned canoeists Michal Martikán and twins Pavol and Peter Hochschorner somewhat disappointed. Kayaker Jana Dukátová, who debuted at the 2012 Games, placed sixth. This means that, unlike in 2008, Slovakia will return without a medal in women’s canoeing.

The quartet of Peter Gelle, Erik Vlček, Martin Jankovec and Juraj Tarr also finished without a medal when they placed sixth in the K4 1000m event on August 9.

Štefečeková, who won silver in Beijing four years ago, finished second in the women’s trap shooting competition on August 4.

“I knew that everything would be fine if I made it to the final... My relatives were there, and I did not want to let them down,” Štefečeková said, as quoted by the TASR newswire. “I did not give up the fight for gold ahead of the final, but [Italian Jessica] Rossi was in a class of her own.”
Štefečeková recorded a total of 93 points after beating Delphine Reau from France and Alessandra Perilli from San Marino in a dramatic three-way shoot-off.

Shooter Danka Barteková, 27, for whom London was her first Olympics, won the first Olympic medal for Slovakia in London, a bronze, on only the second day of the games.

Seasoned shooter Jozef Gönci, 38, for whom London was his fifth Olympics in a row, did not reach his personal target of finishing in at least 15th place in any discipline in which he competed. He placed best in the men’s 10m air rifle and the 50m rifle 3 positions event, finishing 31st in both. He was 39th in the 50m rifle prone. For Gönci, the world’s best shooter at international competitions in 1998 and 1999, London marked the end of a successful career during which he won 85 medals in major competitions.

This year Slovak athletes managed to fish ‘only’ bronze medals from the waters at the Lee Valley White Water Centre in Broxbourne.

Slalom canoeist Michal Martikán won a bronze medal in the men’s canoe single on July 31 after he fell behind his biggest rival – and, ultimately, the gold-medal winner – Frenchman Tony Estanguet.

“Somewhere inside I’m happy, but I’m also a bit disappointed,” Martikán said, as quoted by TASR.
“Before the Olympics I longed for gold, but in the finish I knew that after my small mistakes in the ‘paddling’ track, my time would not be enough for a victory.”

The 33-year-old bronze medallist, who already holds two gold and two silver medals from the previous four Olympic Games, said that he was not completely happy with his performance, adding that there is always room for improvement.

But while Estanguet is pondering an end to his competing career, Martikán is far from this and even hopes to participate in what would be his sixth Olympics.

“I love this sport and I still have a [strong] passion for it inside of me,” Martikán told the Sme daily. “I hope that I will be healthy and I will fight for a place in Rio de Janeiro.”

Twins Pavol and Peter Hochschorner finished third in the canoe double (C2) slalom on August 2, ascribing the bronze to mistakes they made during the ride. They failed to repeat their victories from the previous three Olympics.

“I’m angry with myself,” Peter Hochschorner said as cited by the SITA newswire. “We spoiled it ourselves. We made mistakes and this pushed us into third place.”

Nevertheless, Martikán as well as the Hochschorner twins are already Olympic legends considering their previous Olympic appearances. While Martikán holds the highest number of Olympic medals in Slovakia, the 32-year old twins became the first triple Olympic winners in the history of this category when they won three gold medals in the C2 event, in 2000, 2004 and 2008.

Dukátová, 29, did not match the successes of Elena Kaliská, the gold medallist from Beijing and Athens, when she finished sixth in the K1 discipline on August 2.

Athletes competing in men’s kayak disciplines did not fulfil medal hopes either. Firstly, Peter Gelle and Erik Vlček came in last in the final in the K2 1000m event on August 8. And after Martin Jankovec and Juraj Tarr joined them on August 8 they ended sixth in the K4 1000m event on August 9.
No other Slovak athletes from the 46-member national team have come close to winning a medal in this year’s games.