Figeľ’s PhD to be checked

THE EDUCATION Ministry is to check the validity of a doctorate granted in 2007 to Ján Figeľ, leader of the opposition Christian Democratic Movement (KDH). The move was prompted by a report in the Sme daily suggesting that the university in question had granted Figeľ a PhD mainly due to the fact that he was at the time serving as a European commissioner. 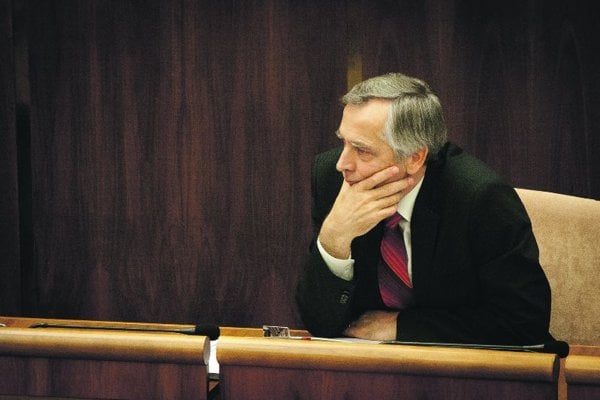 THE EDUCATION Ministry is to check the validity of a doctorate granted in 2007 to Ján Figeľ, leader of the opposition Christian Democratic Movement (KDH). The move was prompted by a report in the Sme daily suggesting that the university in question had granted Figeľ a PhD mainly due to the fact that he was at the time serving as a European commissioner.

“We will ask the Accreditation Committee to check the newspaper claims,” Education Ministry spokesperson Michal Kaliňák said, as reported by the SITA newswire.

Sme reported on August 6 that Figeľ, who studied social work at St Elizabeth’s School of Medicine and Social Work in Bratislava, a university-level academic institution, submitted a thesis concerning European integration. It was this thesis that formed the basis of the university’s decision to grant him a PhD but, according to Sme, the majority of the work was copied from a publication Figeľ wrote with diplomat Miroslav Adamiš, “Slovakia on the Way to the EU”, in which he described the country’s EU accession process.

The daily also wrote that Figeľ’s final work had several important shortcomings, including the absence of an introduction, which he substituted with a short history of integration, or a section setting out the goals of the thesis. However, Figeľ’s opponent when he defended his work, the current rector of St Elizabeth’s, Vladimír Krčméry, and the head of its exam committee, Alžbeta Mrázová, said that they took into consideration Figeľ’s position in the EC, where he served between 2004 and 2009, Sme wrote.

“It was simply taken into account,” Mrázová told Sme, adding that Figeľ “created a good name for Slovakia” during the accession talks.

Figeľ himself commented that he does not regard the circumstances surrounding his receipt of a PhD as a problem since “the centre of the European idea is [its] social dimension”, Sme wrote.

Despite this, Krčméry reportedly admitted to the daily that if anyone other than Figeľ had been defending the thesis, the whole work would have to have been different, since its orientation and language was closer to sociology or political science than social work.

However, the school later released a statement claiming that Sme had misinterpreted Krčméry’s comment by publishing only his first and last sentences. They said that Figeľ, as well as other politicians who studied at the school at that time, including former labour minister Viera Tomanová, fulfilled all the criteria necessary for receiving a PhD.

The university went on to claim that there have been several attempts to create scandals relating to politicians and smear them as “plagiarists, corrupters, adulterers and liars”, and it called on other schools to be cautious in order “not to be used for political media games”.

“I consider it embarrassing and I agree that it [strips Figeľ] of the remaining authority he had,” said KDH MP Radoslav Procházka, as quoted by SITA.

If the ministry inspectors find any discrepancies, the school might lose its right to grant academic titles and to offer PhD courses, SITA wrote.

Figeľ’s case is not the only one in which the Education Ministry has checked a senior politician’s academic qualifications. Inspectors also looked into Labour Minister Ján Richter’s bachelor’s degree, which Sme reported in May was awarded despite the fact he had studied what was at the time an unaccredited specialisation.

Even though nobody has been able to confirm who signed his diploma, and despite Richter’s failure even to remember the name of his bachelor’s thesis, the inspectors concluded that Richter and his 37 classmates at Matej Bel University in Banská Bystrica had received their titles in full compliance with the law, the TASR newswire reported in late June.

However, Kaliňák told SITA that the Richter case was different because the ministry only became involved after members of parliament’s education committee had asked Education Minister Dušan Čaplovič to carry out checks; by contrast, the ministry itself had initiated the Figeľ inspection. Kaliňák claimed that the ministry had already checked Richter and his classmates before being asked to do so by MPs.

Kaliňák went on to dispute a claim by Krčméry that the ministry had previously checked PhD students at his school between 2009 and 2010, asserting that “the ministry did not send any inspection there”, SITA wrote.