OFFICIAL statistics show that the jobless rate in Slovakia still exceeds 13 percent. According to the most recent data presented by the Centre of Labour, Social Affairs and Family (ÚPSVaR), the number of unemployed working-age people in Slovakia stood at 13.34 percent in June, which is down slightly from January, when the rate stood at nearly 14 percent, but represents a 0.15-percent month-on-month increase, and a 0.36-percent year-on-year rise. 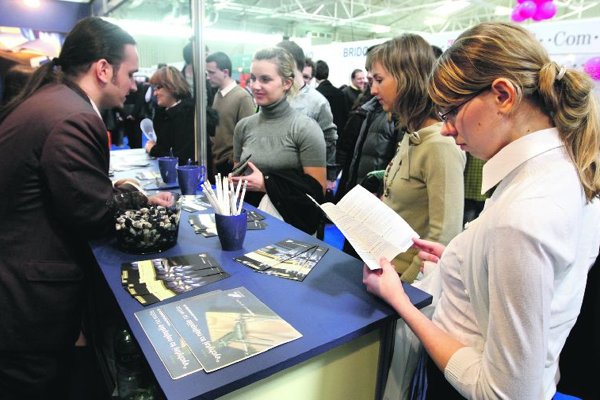 OFFICIAL statistics show that the jobless rate in Slovakia still exceeds 13 percent. According to the most recent data presented by the Centre of Labour, Social Affairs and Family (ÚPSVaR), the number of unemployed working-age people in Slovakia stood at 13.34 percent in June, which is down slightly from January, when the rate stood at nearly 14 percent, but represents a 0.15-percent month-on-month increase, and a 0.36-percent year-on-year rise.

One of the reasons for the increase is the end of the school year, at which point several companies tend to terminate contracts due to weaker summer demand and a consequent lack of big orders, said Michal Kozub, an analyst with Home Credit, as quoted by the SITA newswire.

“The fruit harvest will be low, according to agricultural forecasters, and only ordinary for cereals,” said Kozub, as quoted by SITA, adding that this has resulted in farmers not employing as many temporary employees as normal.

Analysts do not expect the situation to improve in the second half of the year. The current trend in the jobless rate indicates that “the growth of GDP is not strong enough to generate new jobs”, said Martin Baláž, an analyst with Slovenská Sporiteľňa, Slovakia’s biggest retail bank, as quoted by the TASR newswire. However, he added that the current tempo of the economy is at least allowing employers to maintain existing jobs.

Though the predictions are not very positive, one bright spot is the recent introduction of projects aimed at decreasing youth unemployment, which in Slovakia is among the highest in the European Union. However, the government is not specifically targeting another problem group, the long-term unemployed. According to the latest statistics, Slovakia has the highest rate of long-term unemployment – defined as joblessness lasting more than one year – in Europe.

The number of unemployed people in Slovakia aged 20 to 25 stood at 63,744 at the end of June. They constituted 16.1 percent of all those without jobs, according to the ÚPSVaR statistics. In December 2011, the most recent date on which the official youth unemployment rate was reported, more than 35 percent of young people were registered as jobless.

Slovak government now plans to create a total of 14,460 new jobs over the next few months via three EU-funded projects designed to boost youth employment. Based on an agreement between Slovakia and the European Commission, the government will spend €70 million on creating jobs in the transport sector, at small and medium-sized enterprises, and in the form of community-based jobs in municipalities. The projects may also give some work opportunities to other groups, especially people over 50, TASR reported.

While Prime Minister Robert Fico has said the projects will be advantageous since “the people [involved] will be disqualified from [being registered unemployed], which automatically means the income for state” in the form of taxes and payroll taxes, analysts are not so sanguine, saying that the projects will probably only lead to a temporary fall in youth unemployment.

“After ending subsidies [for the projects] these jobs might be at risk, especially if the government does not create better business conditions for enterprises in order to be more economically active and expand,” Róbert Kičina, executive director of the Slovak Business Alliance (PAS), told The Slovak Spectator.

Martin Hošták, the secretary of the National Union of Employers (RÚZ), predicted that “as soon as the money runs out, the problem of unemployment will be back”.

The first project will put €10 million into training and employment for 2,000 people in the transport sector, where the jobs will last at least 30 months, according to Labour Minister Ján Richter.

The state will also repay up to 95 percent of employment expenses to small and medium-sized companies that participate in the second project during the first year, but only if they preserve the new jobs for at least 18 months. This project will receive €40 million.

The third project devotes €20 million towards repaying the expenses of municipalities, which also must maintain any new jobs for at least 18 months, TASR wrote.

The Labour Ministry and the EC have also agreed that employees hired under the projects will receive salaries above the minimum wage.

“We expect that mainly young people who have not worked till today will have after a year and a half or two years of [subsidised] employment much better chances of finding a job without state support, since their biggest deficit is a lack of experience,” Branislav Ondruš, state secretary at the Labour Ministry, explained to The Slovak Spectator.

Kičina agrees that the most positive impact of the measures is the work experience that young people will gain, but warns that this is undermined by the fact that when the state prefers one group over others, both employed and unemployed people who are not eligible for subsidies end up being disadvantaged.

Hošták says that one of the main risks of the project is the ineffective way in which the money is being spent, as well as the risk of corruption during the process to decide who will receive the subsidy.

“Furthermore, there is a risk of misuse of the money by the recipients themselves,” he added.

Kičina warns that subsidies often worsen the business environment. Aside from the temporary character of the project and for the disadvantage suffered by unemployed people who do not qualify under it, he says that some companies might “get cheaper labour than their competitors”, especially if those competitors had previously hired new employees without government support.

Moreover, companies might decide to dismiss current employees and substitute them with people for whom they can get money, he added.

To prevent such cases the ministry says it plans to check whether the companies observe the rules. If inspectors find any violation of the rules, the recipient will have to return the subsidy, TASR wrote.

However, Hošták says he believes it is not possible to avoid corruption and misuse at the point where money is distributed. He says that a solution to this might be to arrange the system to “ensure an automatic claim, providing certain conditions are fulfilled”, meaning that no official would be able to decide arbitrarily who will receive money and who won’t.
Kičina would prefer programmes which do not need to be checked, such as an effort to improve the enforceability of laws, or to decrease bureaucracy and corruption, since these might “support the natural investments into companies which are the only ones able to generate sustainable jobs”.

At the end of 2011 long-term unemployed people accounted for 67.8 percent of all Slovakia’s jobless, the report stated.

“In no other [EU] country did the proportion of people who are long-term unemployed exceed 60 percent,” said Eva Sadovská, analyst with Poštová Banka, as quoted by TASR.

Ondruš, from the Labour Ministry, told The Slovak Spectator that the ministry wants to focus on two main areas in which it plans to decrease long-term joblessness.

First are long-term measures which are based on the need to change the structure of technical education and produce the type of people required by the labour market. Ondruš said that his department is cooperating with the Education Ministry on the preparation of these changes.

“Our department will monitor and predict the development on the market – through the labour offices we will also involve business entities and municipalities,” he said.

The ministry also wants to make use of the National Network of Occupations, and use it to establish a database of basic skills necessary for specific jobs.

Second, the ministry wants to prepare some quicker solutions, such as effective requalification in order to better comply with the needs of companies. To reach this goal the ministry wants to change the system of supported education in order to teach people new work habits, as well as how to add to, change or improve their qualifications, Ondruš said.