RECENTLY several politicians have included Roma settlements in their summer travel plans claiming that their new tourism trend should result in what they called realistic solutions to the problems of the Roma community. Yet, given the nature of politicians’ visits to Roma settlements in the past, which have frequently been seasoned with populism, they have raised questions as to how genuine the interest of politicians is in solving Roma problems. 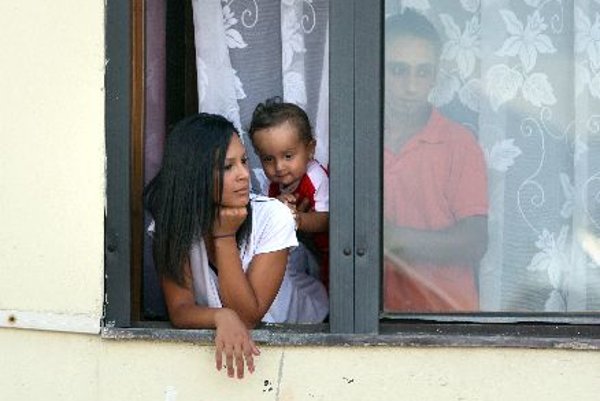 RECENTLY several politicians have included Roma settlements in their summer travel plans claiming that their new tourism trend should result in what they called realistic solutions to the problems of the Roma community. Yet, given the nature of politicians’ visits to Roma settlements in the past, which have frequently been seasoned with populism, they have raised questions as to how genuine the interest of politicians is in solving Roma problems.

Igor Matovič and Alojz Hlina, MPs for the Ordinary People and Independent Personalities (OĽaNO) movement hit the road with a caravan to tour five Roma villages for the purpose of what they have described as learning more about the lives of the Roma in order to prepare better legislation pertaining to Roma communities.

“We want to tell people face-to-face that for the future the solution is not merely to pick up their money at the post office, but that [they are being paid] for work,” said Matovič on July 13, as quoted by the SITA newswire referring to social benefits being paid out.

Two days before Pavol Frešo, chair of the Slovak Democratic and Christian Union (SDKÚ), and some of his party colleagues organised a press conference in front of a Roma settlement in the village of Plavecký Štvrtok to introduce an amendment to the construction law that would simplify the demolition of illegal buildings.

“It is a practical solution which solves a long-term problem pertaining to the flooding of the whole territory of Slovakia with illegal construction,” Frešo told the press conference, as quoted by SITA.

Nevertheless, Irena Bihariová, the head of human rights watchdog People Against Racism, said that the performance of politicians resembled more of a PR gimmick aimed at stirring the emotions of the public, rather than a real attempt to learn about Roma lives in settlements.

“It should be seen as a political gesture through which the deputies wanted to show that they are interested in the Roma issue from the angle that interests the public,” Bihariová told The Slovak Spectator in response to the OĽaNO tour, adding that it was an attempt to approach the public rather than the Roma.

Yet, she admitted that even with these calculations in the back of OĽaNO’s collective mind, their initiative was more agreeable than the gesture of Frešo, who “stood in front of the settlement to declare to the public that he will not be afraid to bring order to the Roma”, which she considers an abuse of the context for Frešo’s personal PR.

Laco Oravec, a programme director for the Milan Šimečka Foundation, agrees that “in the case of SDKÚ it was obviously kind of a demonstration of power and one of the most primitive [examples of] populism”.

“The message was not an attempt to help the Roma, but it was intended to demonstrate the power and radicalisation of the SDKÚ in relation to Roma communities and the approach they choose,” Oravec told The Slovak Spectator.

Yet he also said that the gesture by OĽaNO with the Tour de Roma is meaningful in the way that it shows that “we often speculate and discuss the Roma in pubs with beer and in front of the television, instead of [trying to get] information first hand and to understand their lives in the context of social exclusion or within the sense of social dependency”.

Oravec added that policies should be made based on personal knowledge.

“It would be ideal if standard methods for the creation of public policies are applied, which represent continual and in-depth monitoring and evaluation, so that we can draw information from more detailed studies and more precise surveys,” Oravec said, adding that politicians must have a wider focus and must also get a picture of reality through meeting with people.

Nevertheless Oravec also noted that it is obvious that after years of silence over Roma issues, the parties are now focusing their attention on them, adding that one of the biggest dangers might be that under the pressure of expectations of the majority of society, they will present only proposals which punish the Roma and in some way throw the Roma into social exclusion.

Matovič and Hlina started their “Tour de Roma” on July 16. They selected five villages located in eastern Slovakia: four problematic and one village where the Roma are integrated and co-exist well with non-Roma inhabitants.

The chosen spots differed in several ways: while in Lomnička up to 98 percent of inhabitants are Roma, Žehra is known after the fact that there is a Roma majority and non-Roma minority who want to split from the village and establish a new one. Jarovnice has the biggest Roma settlement in Slovakia, while Lunik IX has been used as a typical example of a place inhabited predominantly by the Roma community. Hrabušice, on the other hand, is a village where Roma and non-Roma people live without any major interracial problems. At some places they were accompanied by their party colleague, Peter Pollák, who is the only Roma deputy in the parliament, SITA wrote.

Bihariová suggested that there was no need to organise a tour since Pollák “knows the life of the settlements and Roma very well; he knows a lot about the issue”, and thus this ‘public evidence of competence’ to deal with the problem was not really necessary.

Oravec, on the other hand said he has certain sympathies and certain reservations regarding what OĽaNO did: “The sympathies are for the courage to show an effort [in solving] the problems of the Roma, especially in a kind of calculation with their voters’ base. OĽaNO also did this before the elections when they nominated a Roma candidate [Peter Pollák] to a relatively high position, which led to [his election to parliament].”

On the other hand, he was disappointed with the language the politicians used during a press conference and in the villages since it might “deepen the stereotypes” about Roma and “cast a negative light” on them.

He mostly disagreed with terms like ‘aggressive behaviour’ or ‘irresponsible parents’, explaining that they might bring an impression that it represents a majority of the marginalised communities.

When asked whether the choice of villages cannot deepen the stereotypes about the lives of Roma, Bihariová said she understands why they picked places which are widely known by the public, and not the ones where Roma are integrated into the society.

“Though it supports the perception of Roma as problematic residents, in this case – when we are talking about setting integration policies – these [problematic] settlements have to be in the field of attention,” Bihariová told The Slovak Spectator.

Oravec responded that “our vision for the future has to offer something even to the most complicated localities and settlements; even the most desperate ones and the most segregated ghettoes”.

Frešo and Ľudovít Kaník from SDKÚ, presented in front of the Roma settlement in the village of Plavecký Štvrtok, Malacky district, their idea to remove the illegal buildings in, as they said, the easiest possible way – to allow the owner of the land to order the demolition, which should be paid by the constructor of the building. The whole process should last no more than 90 days.

Kaník explained that these measures will help to deal with the problems “uncompromisingly, easily and in short term since it is the only way to end this malady which [is] massively spread[ing] around Slovakia”, SITA wrote.

“This form [of presentation of the party] disintegrates SDKÚ rather than unites it, thus we have to talk about it,” said Žitňanská, as quoted by the Sme daily.

She added that in politics the symbols have a certain importance, and that she does not like the kind of presentation Frešo had chosen, saying that she would rather “stand in front of a villa”, Sme wrote.