AFTER some concessions made to the opposition, parliament, controlled by the ruling Smer party, approved the most radical change to Slovakia’s pension scheme since it was launched nearly 10 years ago. The most important change is a dramatic reduction of the amount that contributors pay into the second, private pension-saving pillar. Furthermore, the draft legislation increases payroll taxes for the self-employed and makes payment of payroll taxes for those working based on temporary employment agreements, known in Slovak as “na dohodu”, obligatory. 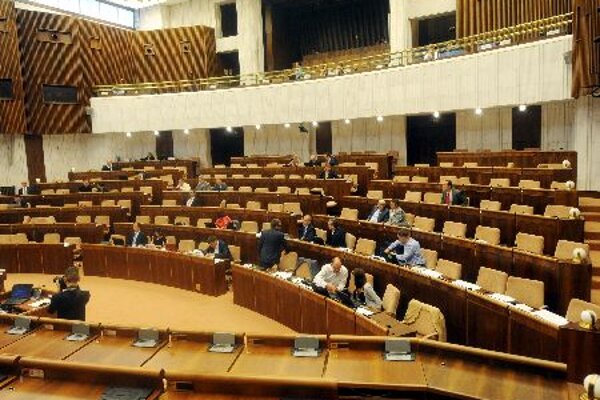 AFTER some concessions made to the opposition, parliament, controlled by the ruling Smer party, approved the most radical change to Slovakia’s pension scheme since it was launched nearly 10 years ago. The most important change is a dramatic reduction of the amount that contributors pay into the second, private pension-saving pillar. Furthermore, the draft legislation increases payroll taxes for the self-employed and makes payment of payroll taxes for those working based on temporary employment agreements, known in Slovak as “na dohodu”, obligatory.

Out of the 128 deputies present, 80 deputies for Smer voted for the revision to the social insurance law on August 10. Forty-six opposition deputies were against it while Alojz Hlina from Ordinary People and Independent Personalities (OĽaNO) and Jozef Mikloško from the Christian Democratic Movement (KDH) abstained from voting.

“I believe that this is a decision that protects a huge amount of people in Slovakia,” Prime Minister Robert Fico said as cited by the Sme daily on August 11.

Fico describes the second pillar as “uninteresting and disadvantageous” for people with gross monthly incomes of less than €1,000, a category that encompasses more than 80 percent of Slovaks.

“Thus, for whom was the second pillar designed?” Fico asked rhetorically during question time in parliament on August 9, as quoted by the SITA newswire. He answered his own question by asserting that the second pillar was created for just 12-13 percent of citizens.

Fico further stated that the pension system is financially unsustainable in its current form, and argued that the second pillar will not be able to provide sufficient income, and was devaluing people’s savings.

Even though parliament adopted some its proposals, the opposition strongly disagrees with the changes and speaks of it as bad news for citizens, and accuses PM Fico of using money “stolen” from the second pillar to patch up holes in the public finance deficit.

“This sad affair has become a reality and the summer blitzkrieg against the second pillar and 1.5 million contributors has become successful,” Pavol Frešo, the chairman of the Slovak Democratic and Christian Union (SDKÚ) told the Sme daily, in response to dealing with the new legislation via fast-tracked proceedings. He indicated that the opposition would fight to redress the original distribution of contributions between the first and the second pillar.

The old-age pension scheme currently rests on three pillars – the first, state-run, pay-as-you-go pillar; the second, private, capitalisation pillar; and a third, voluntary, supplementary pillar – and has undergone repeated changes since major pension reform was unveiled nearly 10 years ago. Prime Minister Fico has expressed consistent opposition to the system, and in particular the involvement of private pension savings companies in the second pillar. About 1.5 million Slovaks participate in the second pillar, which currently holds over €5 billion.

The revision limits employee contributions to second-pillar savings accounts to only 4 percent of salaries, down from the current 9 percent. This means that the ratio by which contributions are allocated to the social security provider Sociálna Poisťovňa and to funds managed by private pension savings companies will change from the so-far 9:9 percent of salaries to 14:4 percent in benefit of the social insurer as of September 1. This ratio will change as parliament has adopted a proposal of SDKÚ MP and former labour minister Ľudovít Kaník, based on which the contribution to the second pillar will increase by 0.25 percent as of 2017 to a final 6 percent in 2024.

Labour Minister Ján Richer, with regards to support of this proposal, said that it is a “demonstration of the cabinet’s interest to stabilise the pension scheme also by adoption of a constitutional law”, the Pravda daily wrote. He promised that in September he would address all parliamentary deputy factions to launch a discussion about its content.

The revised law permits those in the second pillar to contribute additional funds, but only contributions of up to 2 percent of their net income, and these could be deducted from a taxpayer’s tax base before income tax is calculated. The second pillar will ‘open’ again, from September 1 to January 31, 2013, enabling those who currently participate in it to leave and designate all future contributions to the state-administered first pillar, but also allow employees to elect to join the second pillar if they wish. It will be the third time since 2008 that a Fico government has opened the second pillar.

Some fees paid to pension fund management companies will change too. The annual fee for administering a pension account will be 0.3 percent of the net value of the savings. The legislation also increases a fee that is to be paid based on the appreciation of a contributor’s net assets from the current 5.6 percent to 10 percent of the net appreciation. The portion which Sociálna Poisťovňa keeps from contributions for its administration will reduce as well, from the current 0.5 percent to 0.25 percent.

The amended legislation also reverses the current arrangement in which individuals first entering the labour market are automatically enrolled in the second pillar, with the option to leave within two years. The new legislation is for younger employees to be enrolled in the first pillar but given the option of entering the second pillar at any time up to the age of 35.

Beginning in 2017 the normal retirement age under the first pillar would be linked to the average life expectancy in Slovakia. For now there is an expectation that it will increase by about 50 days annually.

The revised legislation also introduces what the cabinet called ‘more solidarity’ into the state-administered pension pillar and makes a retiree’s pension less dependent on one’s actual earnings before retirement, stating that this will help employees currently earning less than €786 per month, the national average monthly salary last year. Individuals earning more than 1.25 times the average monthly salary would get a proportionally lower pension than they would receive under the current calculation method.

The cabinet proposed and the parliament approved to limit annual increases in current pensions received by almost 1 million retirees from the first pension pillar by a fixed amount during the next five years, rather than the current system based on changes in consumer prices and the average wage. In 2018 first pillar pensions would again be valorised by a certain percentage.

The new legislation also increases the minimum assessment base that self-employed people can use to calculate their social and health insurance contributions from the beginning of 2013, boosting it from the current 44.2 percent of the average wage to 50 percent of the average wage in Slovakia two years ago. This will result in self-employed people’s minimum social and health insurance contributions rising from the current €160.24 per month to €185.30. The current 40-percent flat-rate deductible expenses for the self-employed will be replaced by a fixed sum of €420 per month.

Moreover, coefficients used to calculate contributions made by self-employed persons for social insurance and health insurance should be reduced over the next three years. The coefficients, used to divide the tax base in order to calculate the assessment base for payment of contributions, are currently set at 2.0 for social insurance and 2.14 for health insurance. They will gradually fall to 1.486 for both.

The bill also introduces payment of social and health insurance contributions for those working based on temporary employment agreements, at a rate of 48.6 percent. Students and pensioners will pay lower payroll taxes.

Luboš Sirota, director general of the Slovak branch of Trenkwalder, a human resource company, expects that higher contributions of those working under “na dohodu” contracts will mean an increase in wage costs for companies, SITA wrote. With respect to the current economic situation, this increase would be compensated by either a reduction of the number of workers or the transformation of employment contracts to permanent work contracts with lower wages. He also expects that the new legislation will at least slow down the creation of new jobs.