Slovak premiere of Iron Sky was attended by its director, Timo Vuorensola

THE SLOVAK launch of Finnish director Timo Vuorensola’s film Iron Sky was accompanied by his two-day visit to Slovakia. As the organisers from the Film Europe Media Company pointed out, this marks the first time – outside of film festivals – that a foreign director visited the country to attend local premiere of his or her latest work. 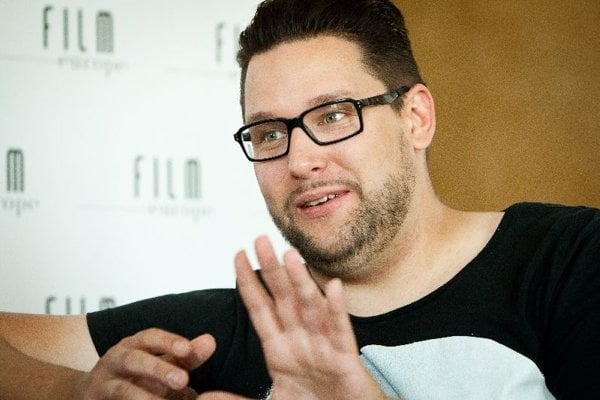 THE SLOVAK launch of Finnish director Timo Vuorensola’s film Iron Sky was accompanied by his two-day visit to Slovakia. As the organisers from the Film Europe Media Company pointed out, this marks the first time – outside of film festivals – that a foreign director visited the country to attend local premiere of his or her latest work.

The movie, which combines sci-fi and political satire in a story revolving around Nazis living “on the dark side of the Moon” and invading the Earth, was screened for the general public on August 13 at the outdoor “summer cinema” amphitheatre in Pezinok, and the following day at the Cinema City multiplex at Aupark in Bratislava to an audience of journalists and specially invited guests.

An entire internet community has grown around the film, forming in the early stages of the film’s preparation. Vuorensola stressed that, in a unique circumstance, €1.2 million of the film’s cost was collected from internet fans. “They were not allowed to influence the plot, however,” he said with a laugh. “We never released the script, and I always repeated that it’s not democracy but a dictatorship…”

“This film was sort of a dream project for me and my collaborators,” he continued. “One day, a bunch of nerds from Finland were sitting in a sauna, chatting about great film ideas, and then someone came up with the idea of making a film about Moon Nazis. We [worked on] this film for six years – it was a passionate project,” the director told the audience in Bratislava. Vuorensola praised the prior day’s screening, saying that he often took part in Question-and-Answer sessions concerning his work, but that he never encountered the kinds of questions like those posed in Pezinok – “miles away from those usually posed, some funny but all showing how much attention the viewers paid to details,” Vuorensola said. “I was expecting difficult questions, but none of those [were asked], and I was really surprised by their questions.”

Iron Sky, although mocking the Nazi ideology, US presidential campaigns, UN decision-making and other political phenomena, has gotten a huge response so far, Vuorensola alleged, including screenings in the US, Australia and at a film festival in Berlin. In Slovakia, it will be shown not just in the capital, but also in Košice, Banská Bystrica, Poprad, Martin, Pezinok, Trenčín, Žilina, and smaller towns, including the Smrdáky Spa.

“I love science fiction as a genre,” Vuorensola concluded. “I love its more subtle aspects like time travel; it does not have to be just space travel all the time - so I think it will follow me more or less in the future. Maybe one day I will try my wings on some other genre, but it’s just something about the mentality that I have as a film-maker. What I like about sci-fi is that it’s a tool to look at this world of ourselves from outside.”