DESPITE its exotic sound, “Sorela” is very much bound to the region as it stands for socialist realism, the official art style that dominated then-communist Czechoslovakia. The public can now travel back to that time period thanks to an exhibition called the Interrupted Song - the Art of Socialist Realism 1948 - 1956. Although Sorela began in the 1930s, mainly developed by Czech communist artists and intellectuals, it started to bloom after World War II, when communism set its foot firmly in Czechoslovakia. 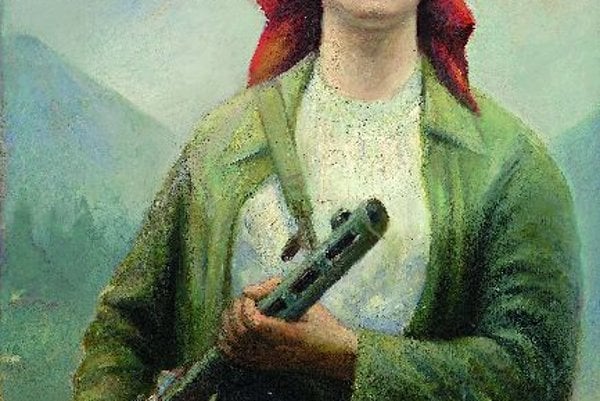 DESPITE its exotic sound, “Sorela” is very much bound to the region as it stands for socialist realism, the official art style that dominated then-communist Czechoslovakia. The public can now travel back to that time period thanks to an exhibition called the Interrupted Song - the Art of Socialist Realism 1948 - 1956. Although Sorela began in the 1930s, mainly developed by Czech communist artists and intellectuals, it started to bloom after World War II, when communism set its foot firmly in Czechoslovakia.

The exhibition organised by the Slovak National Gallery (SNG), however, aspires to do much more than just display paintings and sculptures; it attempts to reconstruct the feel and atmosphere of the time period which culminated in the darkest days of Stalinism.

Along with paintings, drawings, architectonic models and blueprints, the exhibition also displays newspaper clippings and installations such as a typical a socialist living room, complete with authentic smell and a tapped phone, along with bookshelves containing works by Karl Marx and Vladimir Ilyich Lenin.

“You wouldn’t believe how difficult it is to get these ‘Marxist’ works nowadays,” the head of the SNG and exhibition’s curator Alexandra Kusá told The Slovak Spectator. “We told people ‘do you want to exhibit in the SNG’ then lend us your Lenin.” Kusá suggested that after the fall of communism, most of these books vanished for good.

At the exhibition’s webpage www.prerusenapiesen.sk people can find items that did not make it into the exhibition, and they also can add relevant documents, newspapers, artwork and other items to help restore the historical atmosphere.

Among the highlights of the Interrupted Song is the painting Revolution, an attempt to depict the Great Soviet Revolution which in fact features Bratislava’s Grassalkovich Palace - currently the Slovak presidential residence - thus it is fiction rather than socialist reality. Other notable works include Peace Children by Mária Medvecká, which shows festively clothed children playing with marionettes in Orava’s natural setting, as well a theatre curtain by renowned Martin Benka that was never used for its original purpose.

The work Handing Over Victuals in Dolná Orava, also by Medvecká, was intended to claim that the citizens were proud and happy to give their own food products to the socialist state as part of the process of collectivization. However a newspaper clipping placed next to the artwork shows frustrated citizens as a contrast to the depicted ‘reality’.

“Some works are bizarre, for example a socialist romantic scene,” Kusá said.

Kusá explains that Sorela in Slovakia was different from socialist realism in the Soviet Union or even the Czech Republic, which on one hand, has to do with the national tradition and on the other hand, with Laco Novomeský, a Slovak communist intellectual and top politician in those times, who was very conciliatory and who insisted that Slovaks should find their own way. Yet, Novomeský himself was later punished by the regime.

“Thus, you will see here only very few works that are perceived as typical Sorela,” Kusá said.

As for the motivation of the artists, Kusá explained that “after the war, the situation was terrible, and the new regime promised to improve the standard of living and bring life [back] to normal, so many artists, especially the young ones, grasped at this promise and hope”.

The name of the exhibition, which was inspired by a 1960s film of the same name about love between a Georgian female doctor and a Slovak soldier against the backdrop of World War II, also hints at the period that ended suddenly with the death of Soviet dictator Stalin, as well as the position of this era in the wider context of art history, according to a press release of the SNG. Kusá also explained that the name implies that collective singing was the symbol of that time, expressing the pathos of that era as well as the sadness that is also connected with it.

The works can be seen in the Esterházy palace of the SNG daily, except for Mondays, until October 21, and the Thursday Art Talks' lecture focused on the Interrupted Song, led by Kusá, will take place on September 13. A small leaflet – also in English - and a catalogue were published to document the exhibition, while the latter has captions and also a brief summary in English. More information can be found at www.sng.sk.

Yet, this era still evokes a lot of strong emotions as proven by an act of vandalism when on July 23 someone poured red ink on the 4-metre tall sculpture of Stalin placed at the entrance of the palace. SNG PR manager, Dáša Dúbravová, said that the decision to exhibit the statue of the Russian dictator had educational purposes and was meant to help Slovaks come to terms with their past and to better know their national history, which included the communist regime under the strong influence of the Soviet Union.